Creekside Middle School eighth-grader Alex Damrell has always loved musicals but hadn’t tried to perform in one until recently.

“I was going to audition for ‘Willy Wonka’ last year, but I chickened out because my voice was not as good as I wanted it to be,” Damrell said. “But this year, I decided to want to try out and see if I got a role.” 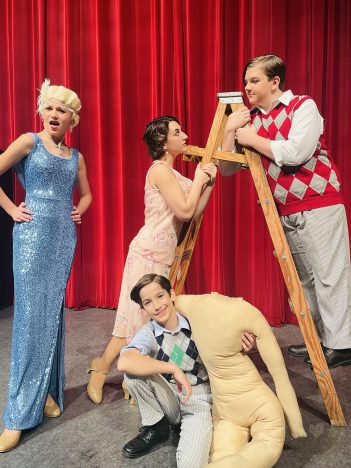 Damrell surprised himself by getting a lead role of Don Lockwood in Creekside Middle School’s production of “Singin’ in the Rain” at 7 p.m. Nov. 17-18 and 2 p.m. Nov. 19.

“The dancing is the hardest part of the musical,” he said. “The whole musical revolves around the dance and just trying to practice and get it perfect is just kind of hard.”

Sadie Cohen, an eighth-grader, plays the role of Kathy Selden.

“It’s one of my first roles that has the triple threat of Kathy sings, Kathy dances and Kathy also acts,” Cohen said. “A lot of times you don’t have a character who is heavy in all three of those areas. I think it’s a challenge, but it’s a really good thing to add that she gets to do a triple threat. That’s something I’m excited for and like about the character. I want to make sure the dancing, the singing and acting is consistent.”

Seventh-grader Lily Bangert is cast as silent film star Lina Lamont, who must now make talkies in the 1920s. Lina has a heavy Brooklyn accent.

“The accent isn’t hard, but the hard part about it is maintaining it,” she said. “I saw a few videos of it before auditions and I thought Lina would be a fun character to play. Lina is the opposite of Kathy. She is a zero threat. She can’t really sing, she can’t act and she can’t dance. The reason she’s been thriving is she can do the flowing pantomime stuff.”

Tickets are $5. For tickets, visit creeksidetheater.ludus.com/