You are at:Home»Current in Noblesville»Noblesville Community»Noblesville girls wins third state soccer title in past four years

It couldn’t have been sweeter for Noblesville senior midfielder Ava Bramblett.

“This is a dream result for our senior year,” Bramblett said. “We have three trophies at the end of our career. It’s the greatest way it could have ended. It doesn’t matter who scores, whoever scores is what we need. I was just happy I could put one home and help our team to the victory that we all had the goal to achieve.” 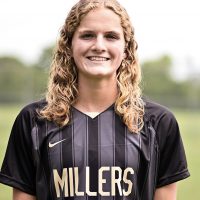 Bramblett, a Miss Soccer frontrunner who has committed to Ohio State, scored the only goal the Millers needed with a little more than three minutes left in the first half in their 1-0 victory over Carmel Oct. 29 in the IHSAA Class 3A state championship game at Carroll Stadium at the IUPUI campus in Indianapolis.

“Four years in high school soccer, Ava lost two games, one in the postseason to Homestead last year and once against Zionsville this year,” said Millers coach Mike Brady, whose team finished 20-1. “It wasn’t just her but the culture she bought into. She’s a special player but she is surrounded by special players as well.”

“They played a different formation,” Brady said. “They came out and fought. That was a good effort by them.  None of us took them for granted. That’s Carmel, the gold standard for women’s soccer and has been for a very long time. I knew this wasn’t going to be an easy victory and it wasn’t. They got their opportunities, and we are just lucky we took advantage of the one that Ava scored on. With 4 seconds left in the game is when I felt first comfortable we might end up winning this thing.”

“Our defense gave up six goals on the year,” Brady said. “We’re tough to score on from my goalkeeper to back line to Marit (McLaughlin) playing in front of them. That’s one of the best defenses in the state and I think that was proven (in the championship).”

Besides Bramblett, the Millers graduate several key players, including Lauren Adam, who has committed to Purdue University.

“Our senior class is just such a tremendous group, not just those that contributed on the field, but those that didn’t even play (in the final),” Brady said. “They all bought into our culture and they want success not only for themselves but for everyone. It’s a special group. Their legacy is for the juniors to now understand what it means to be a senior in this program.”

Bramblett said this year’s team has been one of her favorites.

“Everyone is so smart, and everyone works so hard,” she said. “Anyone can come off that bench and play. We’ve shown that throughout the tournament. It’s always nice when you can go to the bench and not be worried about it.”

Bramblett went down twice, giving the Noblesville fans a scare.

“The first time her shoulder went right into my gut. The second time was basically the same thing,” she said. “Just one of those where I couldn’t breathe and once you go down, you have to come off the field, even if you are saying you are OK.”

Bramblett finished the season with a team-high 15 goals. Sophomore forward Meredith Tippner was second with 14.