You are at:Home»Current in Carmel»Carmel Community»Carmel man runs with a purpose in London

J.R. Sandadi ran in college, but after that, he didn’t find the time.

“I started running again nine years ago to get in better shape,” the 54-year-old Carmel resident said. “At first, I couldn’t run a quarter of a mile, I was so unfit. I started thinking of doing a 5K. The 5K turned into a 10K, which turned into a half-marathon.” 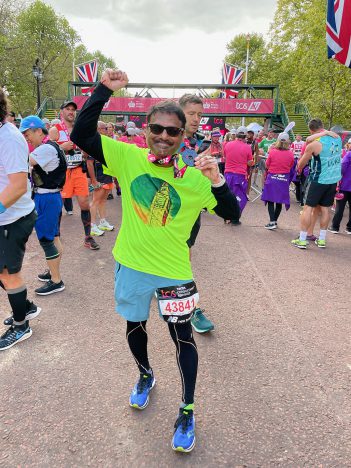 He still needs to complete marathons in Berlin and Tokyo to reach his goal.

Sandadi was running to raise funds and awareness for Brightlane Learning, previously called Schools on Wheels. The nonprofit addresses the problem of childhood homelessness through the power of education.

“They identify the homeless kids in Indianapolis, and then they identify tutors who can help these kids pass some of these standard tests,” Sandadi said. “I got involved five years ago as one of the tutors. My wife and my two kids, when they were in high school, also tutored kids. I developed a purpose. It felt good to help one kid’s curiosity to learn. Some of the third-graders have trouble reading or doing arithmetic.”

Sadadi and his wife, Madhuri Media, have a daughter, Nitya, and a son Shrithan. Both are Carmel High School graduates. Nitya is a sophomore at Indiana University, and Shrithan is a freshman at the University of California at Berkeley.

Sandadi retired at 50 in 2017 to devote time to volunteering for various charities. He raised $8,000 in donations for Brightlane Learning’s educational programs through his London Marathon participation fundraising page.

“From establishing a team of dedicated tutors to collecting uniforms and school supplies for Brightlane students to being an engaged member of our Inclusion Diversity Equity and Awareness Committee, J.R. is committed to aiding every facet of Brightlane’s work. We’re grateful for his continued encouragement and advocacy and for the support of all those who give on his behalf,” stated Claire Brosman, Brightlane’s vice president of grants and communications.

The trip was special to Sandadi for a few other reasons.

“The crowd support in London was just amazing,” he said. “When you are running 26.2 miles, at certain points your body seems to go down. That’s where the crowd picked you up. In New York, you run through five boroughs and there were block parties. I thought London matched that intensity and the zeal to support all the runners.”

Sandadi, who is from India, came to the U.S. after graduating from Birla Institute of Technology And Science in Pilani in 1990. He was joined by five other college friends from India at the London Marathon.

“It’s the first time all six of us have run in one race. That was super special,” said Sandadi, who earned a master’s degree in industrial engineering at Louisiana Tech. “We reconnected at our 25th reunion, and we were all involved in running. We started talking about running one race together.”