You are at:Home»Current in Noblesville»Noblesville Community»Brewery, local group collaborate to release new beer

The Hamilton County Invasives Partnership has teamed with a brewery that plans to open its third location in Noblesville next summer by releasing a new beer.

The organization has collaborated with Bier Brewery to release Native Nectar, which is the Midwest’s first beer dedicated to raising awareness about native and invasive species. The can for the blood orange Kolsch-style beer will feature native coneflowers, butterfly milkweed and pollinators, in addition to information encouraging individuals to get involved with invasive species management. 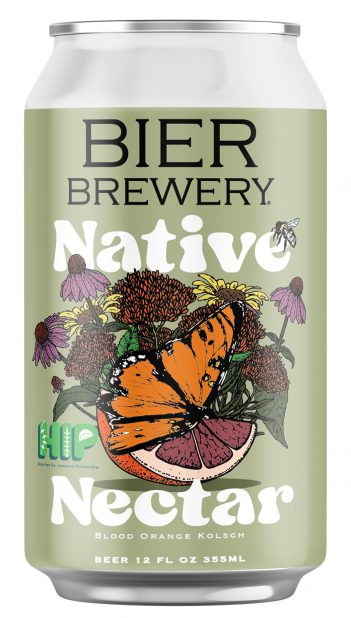 “We are excited to work closely with HIP on this project to bring awareness to our native species along with the invasive ones that wreak havoc on our local environment” said Ryan Connor, director of sales and a co-owner of Bier Brewery. “We wanted to bring awareness in the community on how we can make a difference in the environment right here locally.”

Bier Brewery is a local, family-owned and operated brewery that opened in 2010. The brewery, which offers more than 130 beer selections, was started by Jerry Connor and his son, Darren, as a small-scale nano brewery and has since evolved to include Darren’s siblings, Ryan Connor and Leah Keene.

The City of Noblesville announced in September that Bier Brewery was opening a 6,000-square-foot taproom at 1618 S. 10th St. that will also feature a dog park, a kids’ playground, covered outdoor seating and bike access to the Allisonville Road Trail. It will mark the third and largest location for the brewery, which also has taprooms at 5133 E. 65th St. in Indianapolis and another location at 13720 N. Meridian St. in Carmel.

Claire Lane, coordinator of the Hamilton County Invasives Partnership, also pointed out that invasive species can be destructive and hopes he beer will bring attention to the problem.

“Many people don’t realize the sheer number of invasive species around, even in our own yards, or the level of destruction they create in parks and natural areas we love,” Lane said. “This beer is a great way to reach new audiences and draw attention to the fact that we can make a difference on invasive species on our own properties or on a larger scale by working together and planting natives.”

Native Nectar can be found at the Indianapolis and Carmel taprooms and select package liquor stores in central Indiana, with a portion of proceeds to benefit the Hamilton County Invasives Partnership.