October isn’t just for football and Halloween, as dog owners and their faithful companions recently enjoyed a day out for a good cause at Barktoberfest at Asa Bales Park in Westfield.

The sixth annual event held Oct. 8 at the park brought a variety of dogs, ranging from pitbulls, corgis, labradoodles, among others, many of which were dressed up in their best Halloween costumes. All proceeds from the event directly benefited the Humane Society for Hamilton County.

Westfield resident Lindsey Lawrence was among those in attendance with her mother, Cathy. She said she has attended Barktoberfest every year since it started. Lawrence, who brought her dogs Tucker, Caramel and Tinker, said her main reason for coming back is because her pups really enjoy it. She noted that Barktoberfest offers plenty to do for attendees.

“They bring rescue dogs, too, and my sister’s thinking of getting one. They have really good causes here, which is really fun to go to,” Lawrence said.

Westfield Mayor Andy Cook and his wife, Barb, also came to Barktoberfest with their 5-month-old English cream retriever puppy, Willow. Cook said the event, which was hosted by Westfield Welcome, was an opportunity for citizens to enjoy themselves.

Carmel resident Jenny Kindsfather came with her bulldog, Clyde, who was dressed up for the Halloween costume contest. The event also featured more than 20 vendors and agility races. Kinzsfather said she was enjoying the weather, meeting new people and seeing the different dogs in attendance. 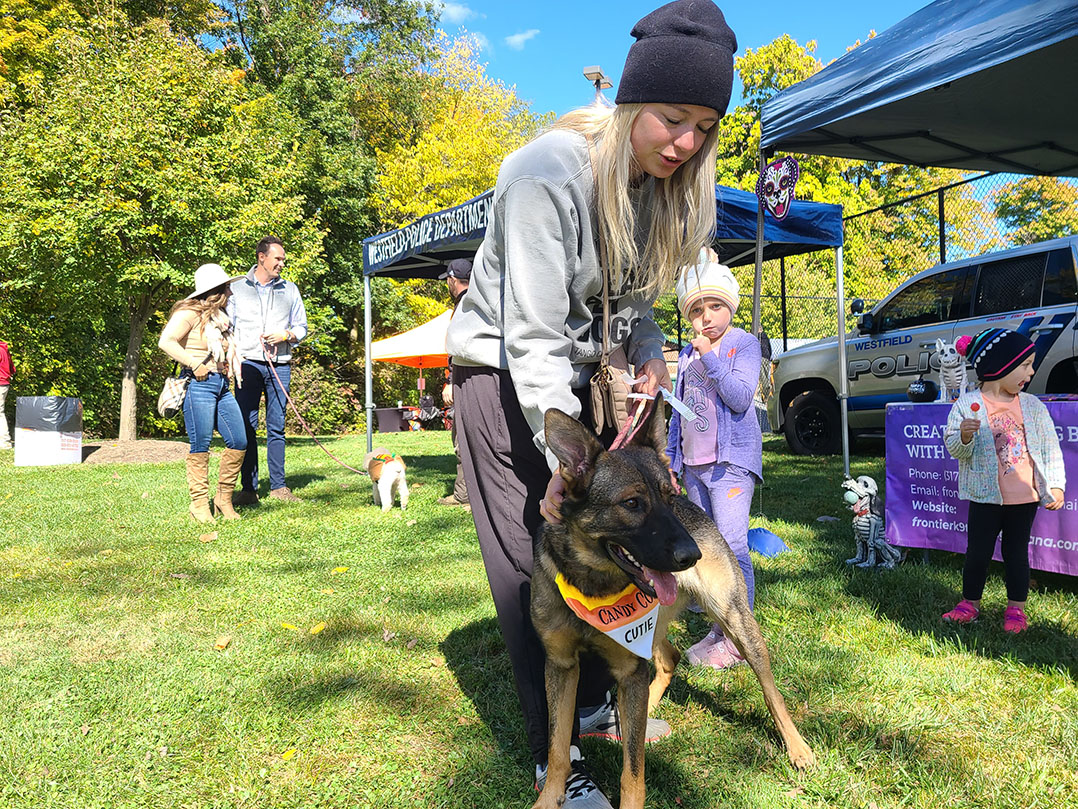 Kayla Arnold, director of Westfield Welcome, said the event has typically attracted 500 people and noted there was something for everyone to enjoy, including the dog agility races.

“Dogs are very into it – and some are not,” Arnold said with a smile.

Vendors such as Barbara Grider were also enjoying the opportunity to see the creative dog costumes as visitors walked by. Grider, who co-owns Happy Mutt Pet Bakery with her daughter, Melissa, said the event provided an opportunity to showcase her business while socializing with those in attendance.

“It’s got the feeling of the community and the dog lovers coming together,” she said.

Westfield resident Roberta Jordan, who was in attendance with her mini goldendoodle, Ruby, said she enjoyed the opportunity to get out and socialize her dog.

“I just love having her interact with people and other dogs, and it’s for a good cause,” Jordan said.

Jamie McIntire, lead volunteer with the Humane Society for Hamilton County, said Barktoberfest raised $3,000 for the organization, which she noted is the only open adoption, no-kill animal shelter in Indiana. Funding from events such as Barktoberfest allow the humane society to serve animals that come into its facility, she said.

“There’s something special about everyone coming together for the same cause,” McIntire said. “If we didn’t have events like this, we wouldn’t be able to take in as many animals. They’re life-changing.”

She also said the assortment of Halloween costumes on dogs small and large at Barktoberfest is something she enjoys seeing every year.

“You can’t go wrong dressing up a dog,” she said with a smile. “It’s the cutest thing.” 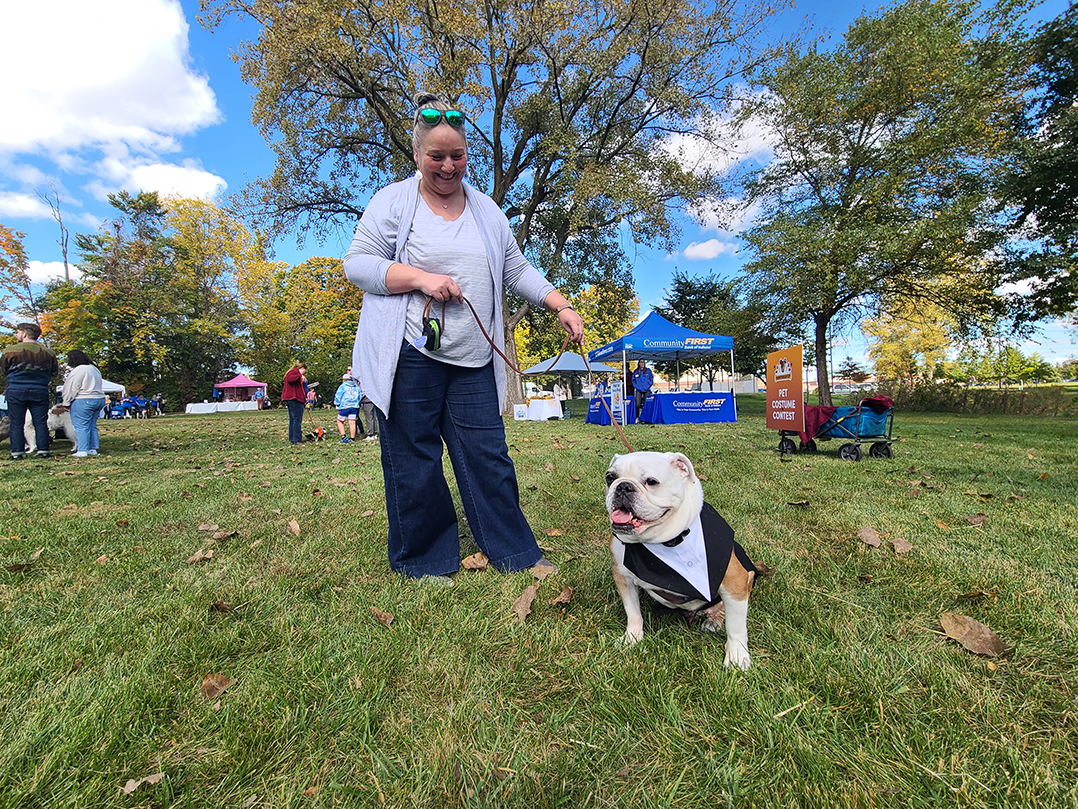 Carmel resident Jenny Kindsfather and her bulldog, Clyde, were among the attendees at the sixth annual Barktoberfest Oct. 8 at Asa Bales Park in Westfield. (Photo by Matthew Kent)

Upcoming event for the Humane Society for Hamilton County

The Humane Society for Hamilton County will host its 2022 Tinsel & Tail Holiday Petacular event from 6 to 9 p.m. Nov. 17 at the 502 East Event Centre, 502 E. Carmel Dr., Carmel. The event will feature a silent auction, dinner, a golden ticket raffle and a presentation of the year’s most amazing rescue stories, according to the organization. For more information, visit hamiltonhumane.com/programs/events/tinsel-tails-2.