You are at:Home»Current in Zionsville»Zionsville Cover Stories»High speed shift: Zionsville Community High School grad makes a career of his passion for auto racing

In the throes of the COVID-19 pandemic, a post on the popular discussion site Reddit sparked a career shift for DJ Clark, a 2009 Zionsville Community High School graduate. He decided in 2020 he wasn’t entirely fulfilled by his day job, so he began pursuing a career related to his lifelong passion for auto racing.

Clark, 32, is now a public address announcer and Sirius XM announcer for SRO Motorsports Group. He recently made his way back to Indiana from his home in Los Angeles to work at the Indianapolis Motor Speedway for the first time during the Indianapolis 8 Hour events Oct. 7-9.

Clark got his undergraduate degree in theater from Belmont University and his master’s degree in screenwriting from California State University, Fullerton, and while he has been working as a literary manager for a while, he said he wanted to engage more with his interest in racing outside of his full-time job.

“It’s very liberating to finally be doing what I’ve loved all along,” Clark said.

His passion for racing started when he was growing up in Zionsville, as his parents were heavily interested in the sport. Clark said he has memories of being two or three years old, curling up with his dad Sunday mornings before church to watch Formula 1 races. His mom, he said, was known for being able to listen to a car and recognize if it was turbocharged or normally aspirated.

In 1997, the Indy 500 was delayed two days for rain, so his parents took him for the first time on a Tuesday.

While his brother and sister-in-law now live out in Washington D.C. and Clark lives out in Los Angeles, he said they always make it back to visit their parents in Zionsville and attend the Indy 500 as a family.

Clark said during the pandemic, he started watching online broadcasts of sim racing and iRacing, or racing game software that simulates auto racing, because he “needed (his) fix” when the world of live auto racing was on pause.

He started out doing commentary for sim racing and iRacing events as a hobby, as well as occasionally racing, he said, but soon became curious about what it would take to turn it into a career. He saw a post on Reddit that asked, “How do you become a sim racing broadcaster?” with a simple solution: “just reach out to the companies.”

Clark did just that, and soon he connected with Joe Peak, founder of the sim racing broadcasting company Global Sim Racing Channel. Peak, 38, hired Clark as a co-commentator in 2020.

“You can tell when someone has a comfort in not only being on the mic, but in explaining racing and presenting it to people,” Peak said. “We’re in the entertainment industry, so it’s important to recognize when someone is a good storyteller and has the personality and knowledge to do this.”

Clark said he soon recognized his aptitude for announcing and decided to throw himself into it.

“I kind of found my match and I thought, ‘Oh my goodness, I’m really, really good at this,’” Clark said. “This was something that came very naturally to me, but I’ve also had mentors there to help guide me along the way.”

In May 2021, Clark said he began reaching out to more companies and sending out his reel, and eventually he heard back from Robbie Montinola, vice president of marketing communications and business development at SRO Motorsports America.

He said Montinola soon asked him to do PA announcing at live events for the company after he had done a couple of digital broadcasts.

Clark continues to be a full-time literary manager but said he is essentially working just as much announcing and providing commentary for racing events.

His current role at SRO led him to announce at IMS for the first time in his career, he said, but the experience was particularly special because it was the first event in IMS history where races extended into the night.

Clark said his biggest inspirations have not only been his mentors, bosses and co-workers, including Peak, Montinola, and others, but also storied individuals in the racing world, such as the late broadcaster Tom Carnegie. While Carnegie was not a personal mentor to him, Clark said he looks up to him. .

“(Carnegie) would talk a lot about letting yourself get excited as an announcer, because that allows for fans to get excited with you,” Clark said.

Between that and learning from his mentors, he said he has been able to refine his style, which he characterizes as “bombastic,” largely because of his excitable and expressive characteristics that naturally occur while calling races.

Clark said he feels he has always been well-suited to this career path, even before he knew it was where he wanted to end up.

“The truth is, when I was three years old, I was yelling at kids in the Christmas pageant because they couldn’t remember their lines,” he said. “I was a theater major for my undergrad. My life has very much been building to this point, and I feel that this is kind of where I was supposed to wind up.” 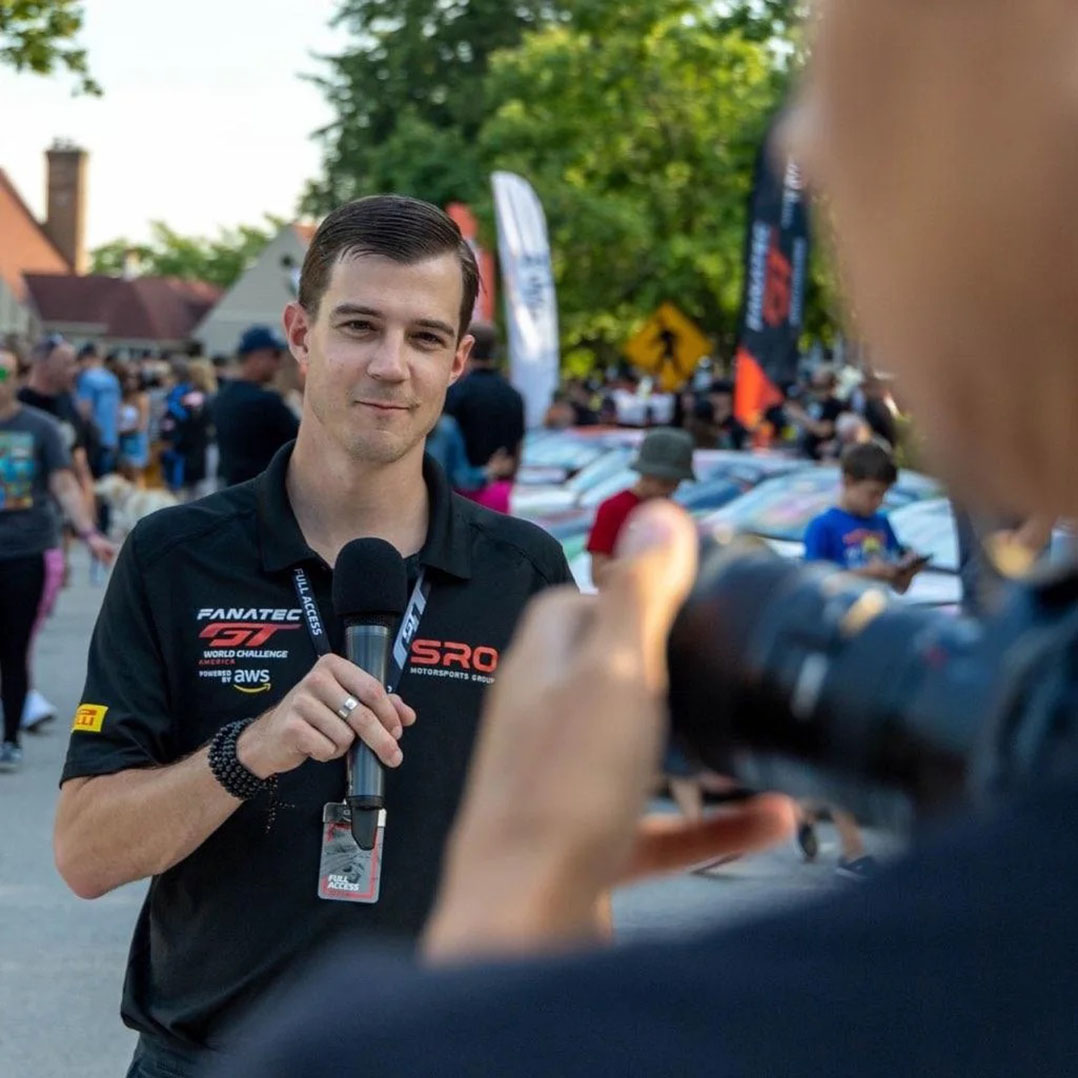 DJ Clark records a welcome video from the Road America Parade for SRO in 2022. (Photo courtesy of DJ Clark)