One hundred fifty years ago, Fishers was founded by farmer Salathiel Fisher, who divided his land into town lots along the railroad tracks that ran through town. At the time, Fishers was a sleepy blip on the state map, notable only for being a stop along the Peru & Indianapolis Railroad near the present-day intersection of 116th Street and the tracks.

Today, Fishers is a vibrant city of 101,171 residents. It is Indiana’s fifth-largest city and is one of the fastest-growing cities in the Midwest. Since its humble beginnings as a railroad stop, Fishers now is home to more than 900 businesses and prides itself on being a hub for life-sciences companies and technology developments.

As Fishers celebrates its sesquicentennial with various events that honor the past, city officials embrace a projected future of continued growth and employment, recreational and quality-of-life opportunities for its residents.

“(The sesquicentennial) is an opportunity to reflect back,” Fishers Mayor Scott Fadness said. “What’s astounding is how much change has happened to this community in such a short period of time. If you look at the 150-year life of Fishers, for the first 130 years Fishers stayed pretty much the same. It’s really been over the last 20 to 30 years that we’ve seen this unbelievable transformation in our city.

“When you look at it, it provides a perspective on just the sort of dynamic time we’re living in.”

What follows is a brief look at Fishers from its humble beginnings to its present-day explosive growth. 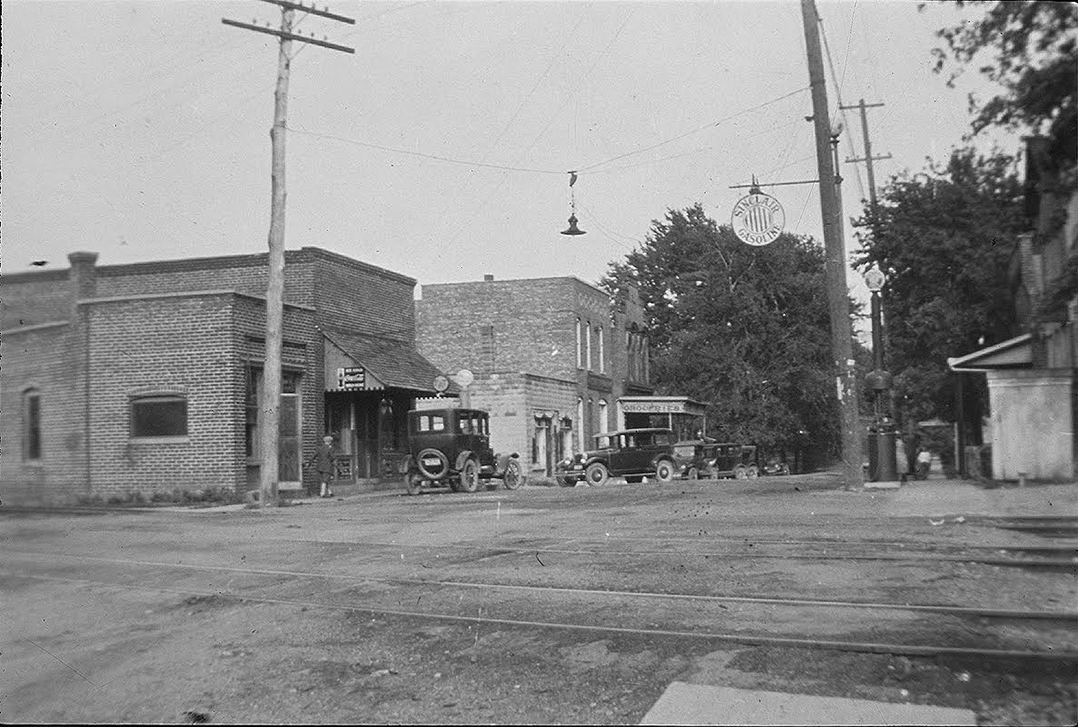 A look at downtown Fishers, circa 1920s. (Photos provided by Robert Bowling)

‘Loose around the edges’ reputation

Since its formation as a town in June 1872, Fishers – which became a city in 2015 — has gone through many changes. Originally named Fishers Switch, later renamed Fishers Station, the town was rechristened Fishers in 1908. The town was named after the founder Salathiel Fisher and was platted near the railroad station where the former Nickel Plate Bar & Grill operated.

At the time, Fishers had a reputation as being “loose around the edges” because it was a railroad town, according to Hamilton County Historian David Heighway.

Fishers Historian Robert Bowling compared Fishers in the late 1800s and early 1900s to the “wild, wild West” because many people who visited were either passing through or coming to visit one of the taverns in the town.

Heighway also said there wasn’t much of a law enforcement presence, noting that the closest was the Hamilton County sheriff in Noblesville.

“Fishers was basically a Dodge City prior to the first World War. It was literally shootings and bombings and train robberies and grave robbing, and just all sorts of insanity,” Heighway said. “If you wanted a place to go have a drink and blow off some steam, you went to Fishers. That’s why it got a little rough and rowdy in those first few years.”

Part of what fueled that reputation was the Nov. 19, 1881, “Battle of Mudsock,” which began as a small argument between two men from rival saloons that sat on either side of the railroad tracks. The fight continued throughout the night and ended in a gun battle. Two people were killed and 30 were injured.

The Battle of Mudsock made national news, in part because it happened 10 days after the infamous Gunfight at the O.K. Corral in Tombstone, Ariz. The news of the deadly bar brawl spread as far as New York, Texas and even England, Bowling said.

“A lot of the (local) residents were upset about it because most of the people that were involved weren’t even from Fishers,” Bowling said. “Most of them lived outside of the city limits of Fishers, and so it gave the city a bad name.”

Fishers also experienced bombings and had a history of grave robbing that also gave the town an outlaw reputation in its early years. 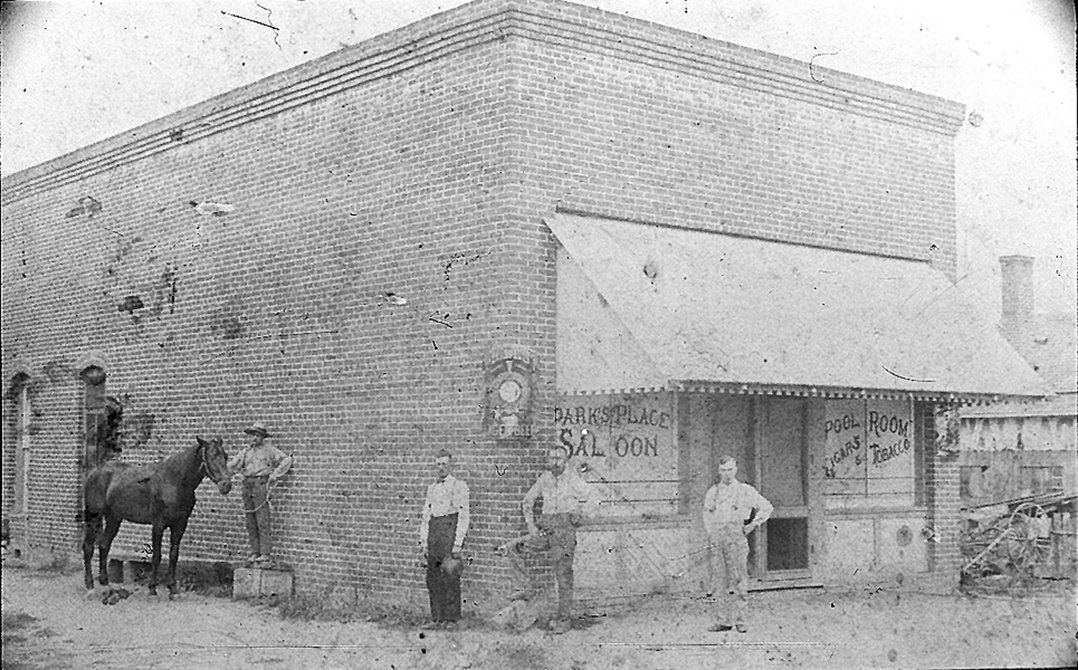 Men stand outside an old saloon in Fishers, estimated to be in the late 1800s or early 1900s. (Photos provided by Robert Bowling)

As the town grew and Fishers High School was established in the late 1800s, the rough-around-the edges reputation started to fade as residents formed a community. The Fishers High School Building that used be at Lantern Road and 116th Street, where Fishers Elementary now sits, was built and dedicated in 1908. However, Heighway said records of Fishers High School graduates date only to 1896, although the exact location of the original school is unknown.

“When they built Fishers High School, that all of a sudden became identifiable,” Heighway said. “It was like, ‘We are now Fishers High School people. We have our yellow brick building, and we now have at least some kind of identity because all our kids are a part of this.’”

As a result, Fishers was a rural farming community for many decades afterward.

Larry Reynolds, who grew up in Fishers and graduated from Fishers High School in 1959, was among the town’s first historians. He said his graduating class had only 20 people, and he was related to 13 of them.

Reynolds said the town was desolate and rural during his childhood.

“Kids played in the streets,” Reynolds said. “We would play football or basketball at the edge of the street because nobody came through town. The big social event was church or basketball games, and everybody in Fishers would fill the gym, which could only hold about 300 people.

“Fishers was a great place. Of course, everybody thinks (that) about their hometown, but we did have something unique.” 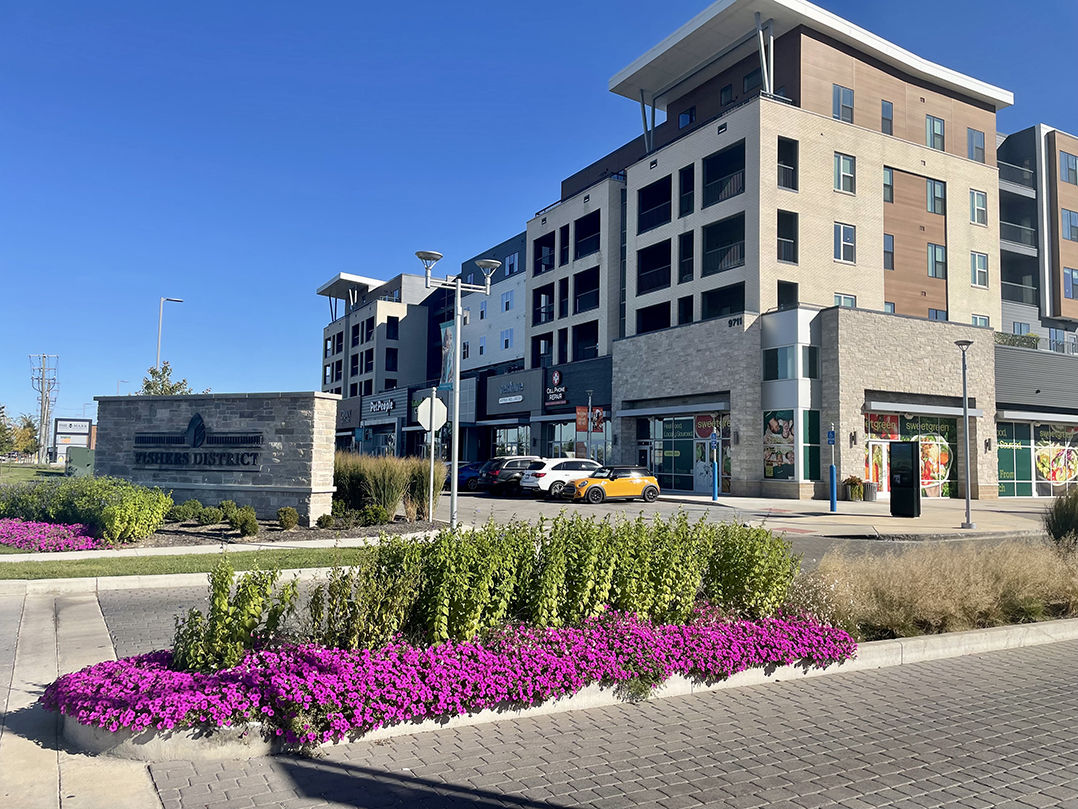 The new Fishers District, where many farmhouses once sat. Today, the Fishers District is an 18-acre, multi-use area that includes restaurants, retail and housing. (Photo by Taylor Dixon)

A city of growth

Fishers officially became a city in 2015. As the city grows, people who were reared there decades ago marvel that Fishers was a one-stoplight town only 50 years ago.

Reynolds was reared on a farm home on 116th Street, where the Fishers District now sits. His grandfather owned the farm, and Reynolds spent most of his life there. But in 2016, the city bought the land and the farmhouse, so Reynolds moved permanently to his vacation home in Florida.

“It’s just progress. It’s wall-to-wall buildings, and whether you agree with the way it has taken shape or not, it’s still a cultural shock to people who lived in that tiny little town,” Reynolds said. “There’s a lot of good things happening, but personally, I would have loved to live in that house for years. We had 65 Christmases in that farmhouse. But (the city) widened the street and now there’s restaurants there. That’s what happens with progress.

“But, personally, I feel pushed down by progress.”

Others in Fishers, such as Fadness, embrace the growth and want to build on it. Fadness has served as the Fishers’ only mayor since it became a city in 2015.

In September, Fishers announced three new development projects that will continue to expand the city. A $1.1 billion economic development that includes the Andretti Global headquarters, Stevanato Group and the expansion of the Fishers District, is planned to be built by the end of 2025.

Fadness said at the beginning of his time in office he was focused on growing the city and attracting businesses. Now, he said the focus is shifting to create more entertainment opportunities, like the event center planned in the heart of the new Fishers District expansion east of Interstate 69 between 106th and 116th streets.

“When I first became mayor, (Fishers) set out on this course to become a smart, vibrant, entrepreneurial city,” Fadness said. “If you think about it in those early days, we were trying to make very smart, informed decisions about policy and where we needed to go. That led to really our entrepreneurial movement, which attracted more development and more commercial activity and has put the city in a really sound financial place. And because of that, and the financial resources that we have, we’re able to invest in vibrancy now so people have a really pretty dynamic place to live. It’s all been part of a broad strategy to make Fishers the best places to live in America.”

Not surprisingly, Fadness looks forward to the future and the city’s next 150 years.

“With each year and each project and the momentum that continues to build, the quality and caliber of opportunities continues to increase,” Fadness said. “My end goal is a bit abstract. I think we have to not get set in a particular way, but rather always be evolving, adapting and changing the world around us.”

The city of Fishers kicked off its 150th celebrations in June with the launch of the sesquicentennial trail. The self guided trail leads participants through Fishers with stops at some of the city’s most iconic locations, such as the Ambassador House and Conner Prairie, as well as local businesses and other important landmarks. Participants can pick up an adult or children passport at six locations,including Fishers Park’s front desk, Hamilton East Public Library, City Services Building, Ohanalulu, Schoolhouse 7 Café and Conner Prairie.

Squirrel Stampede mini golf launched at the Fishers Farmers market Sept 24 and is set to pop up at future events including AgriPark’s Fall Festival Oct. 12-15. The four hole putt putt course follows the adventures of squirrels as they traveled through Hamilton County nearly 200 years ago.

The city is partnering with the Towne Post to create a community time capsule that will be displayed at the new Arts and Municipal Complex set to open in the spring of 2024. The time capsule will be opened again in 2073 as a celebration of Fisher’s 200th anniversary.

Fishers has also launched a blog and bimonthly podcast series that looks at topics related to Fisher’s history. The podcast is hosted by Tom Britt and Larry Lannan and will be ongoing throughout the year.

Before 1910 the population of the town of Fishers was not counted separately from Delaware Township, which encompassed other parts of Hamilton County. Below is a list of population numbers from 1910 to now. These numbers were found on the US Census Bureau’s website.