Johnny Mathis has one main reason he is out on tour in his 66th year as a recording artist.

Mathis, 87, will bring his Voice of Romance Tour to the Palladium at the Center for the Performing Arts in Carmel at 8 p.m. Oct. 15. 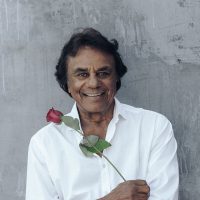 “Every time I step on the stage, I think of the one person who was so meaningful to my career, (and) that was my dad,” Mathis said. “He was the first person I heard sing.”

“He was too busy having children. There were seven of us,” Mathis said. “We had no money. All we had was each other. Fortunately, we grew up in San Francisco and all you had to do was embrace the public. Before I knew it, I was making records.”

Mathis grew up competing in track and field as a high jumper and a hurdler.

“The only claim to fame is that I broke the great Bill Russell’s high jump record (6 feet, 5 1/2 inches in 1955) in college (University of San Francisco),” Mathis said. “The next thing I knew, I was on a plane to New York signing a contract with Columbia Records.”

Mathis was offered the contract the same week he was supposed to leave for the U.S. Olympic Track and Field Trials. He chose music, signing a five-year deal with Columbia in 1955. He remained friends with NBA legend Russell, who died at 88 in July.

“Then I met (legendary producer) Mitch Miller, who liked my voice but didn’t like what I was singing because it was too jazzy,” Mathis said.

Soon, Mathis said he was recording songs like “Chances Are,” “It’s Not For Me to Say” and “Misty.”

After Mathis had some success as a singer, he got to meet the late Nat King Cole.

“I got to tell him I grew up listening to his singing and how he influenced me in so many ways,” Mathis said.

In 2021, technology allowed Mathis to sing a duet with Cole on a Christmas album.

Mathis said at one point in his career he ran out of ideas as far as what to sing.

“I lived in Europe for a while. I sang in French, German, Italian, Spanish, but that didn’t go over so well here (in the U.S.),” Mathis said. “Mostly, I listened to what I thought the record company thought would sell as my singing was concerned. That was my guide. I got an opportunity to work with some of the greatest musicians in the world and some of the greatest singers, too.”

Mathis said he started trying to sing songs that the audience was familiar with during a concert.

“Then later on, I realized what they really wanted was to hear songs that I wanted to sing,” he said. “So that is how I evolved as far as what I sing and when I sing it. I’m a big fan of musicians, and over the years with some of the greatest musicians in the world. In fact, (composer/pianist) Henry Mancini and I toured the world together for many years. That’s where I get most of my enthusiasm working with other musicians.”

When he was younger, Mathis said he developed a workout regimen that he has maintained through the years.

“That has been a good foundation for my singing,” he said.