A mentoring program offered at Noblesville Schools that pairs community members with students with a focus on developing positive relationships is seeing continued growth.

The program, known as Compass Mentoring, was launched a year ago and is designed to help students expand their access to caring adults while enhancing their strengths, said Nicole McClain, mentor coordinator with Noblesville Schools.

McClain noted that part of her job involves working with school counselors and school social workers to identify students who could benefit from a trusted adult in their life. From that point, McClain said she works with community members.

“Through common interests, personality traits, we make those matches and hang out and have fun,” she said.

Individuals who are selected as mentors after going through a comprehensive background check meet with students for about 30 to 45 minutes every other week during the school year. Materials and training are provided to mentors, according to McClain.

“We’re looking for more mentors who are just passionate about working with our students,” McClain said. “Really, we have it student-led, what the students are interested in … and we like to individualize each match.”

The program, which started with eight students, is now serving 30 individuals this school year, according to McClain, who hopes to see that figure grow as time goes on.

Rob Bocko, a father of four children, is a mentor in the program and was paired with 9-year-old Cooper Bonesho, who attends Noble Crossing Elementary School, during the first year of the program. Bonesho’s mother, Brittany, is a kindergarten teacher at the elementary school.

“When I saw (the program), I thought, ‘This looks kind of fun,’” Bocko said. “It’s about showing up and being yourself … we never really had an agenda.”

Occasionally, Bocko and the young student would discuss school-related material from a book when they met every other week. However, he noted that “a lot of it is being consistent, being authentic and having a conversation.”

Bocko said in his discussions with Bonesho, he attempted to find out what were some things that the student looked forward to or what might have been a challenge. But Bocko also stressed that it wasn’t just about him being there, saying he would also share things that he was also working on in his life.

“There are things that I’m continually trying to get better at and just being real,” Bocko said.

One thing that both individuals have in common is chess.

That sentiment was shared by the fourth-grader, who said he enjoyed having discussions about life in general with Bocko whenever they met.

“We would talk about how our week went,” he said.

Bocko also said as a mentor, he tried to focus their discussions regarding the youth’s future.

“I’m just one piece in a bigger web of connections of support and I think that’s important in any kid’s life,” Bocko said. “I’m just happy to be a part of it and it’s been a pleasure to get to know this young fella.”

Brittany Bonesho also said she’s seen a change in her son as an individual through his interactions with Bocko.

“I think he has really conquered a lot of his fears and I think that has a lot to do with meeting Rob, being more confident and meeting another grown-up who is a trusted advisor in his life,” she said.

Bocko also encouraged other adults to get involved and make a positive impact in students’ lives.

“If you’re real and willing to be a friend, you’ve got what it takes,” he said. “It’s such a blast. It’s a really good time.” 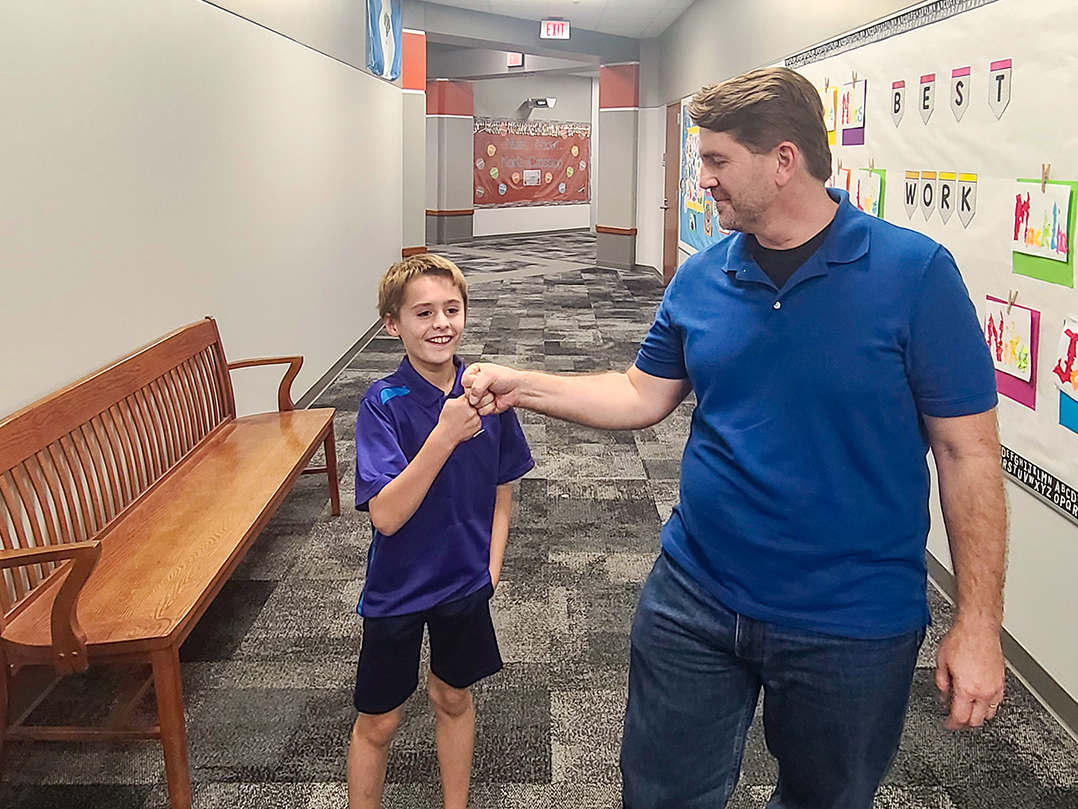 Cooper Bonesho, a fourth-grader, smiles as he prepares to fist-bump his mentor Rob Bocko in the hallway at Noble Crossing Elementary School. (Photo by Matthew Kent)

Where to learn more

For more information on the Compass Mentoring program or to participate as a mentor, contact mentor coordinator Nicole McClain by emailing nicole_mcclain@nobl.k12.in.us. Information can also be found by visiting https://www.noblesvilleschools.org/Page/8363.