You are at:Home»Current in Fishers»Fishers Cover Stories»Master Chef: Winner of reality show shares thoughts on cooking

For Fishers resident Kelsey Murphy, life hasn’t slowed down after she was selected the Season 11 winner of “Master Chef,” a reality cooking show that stars temperamental British chef /cooking judge Gordon Ramsey on the Food Network.

If anything, life has gotten faster for Murphy, a mother of three young children who operates her restaurant, Inspo, at the Fishers Test Kitchen. As she is in the process of a career change from a physical therapist to a full-time chef and she is also writing a book.

What follows is a Q&A interview with Murphy, who competed against 15 contestants during 18 episodes of Season 11, which first aired June 2, 2021. 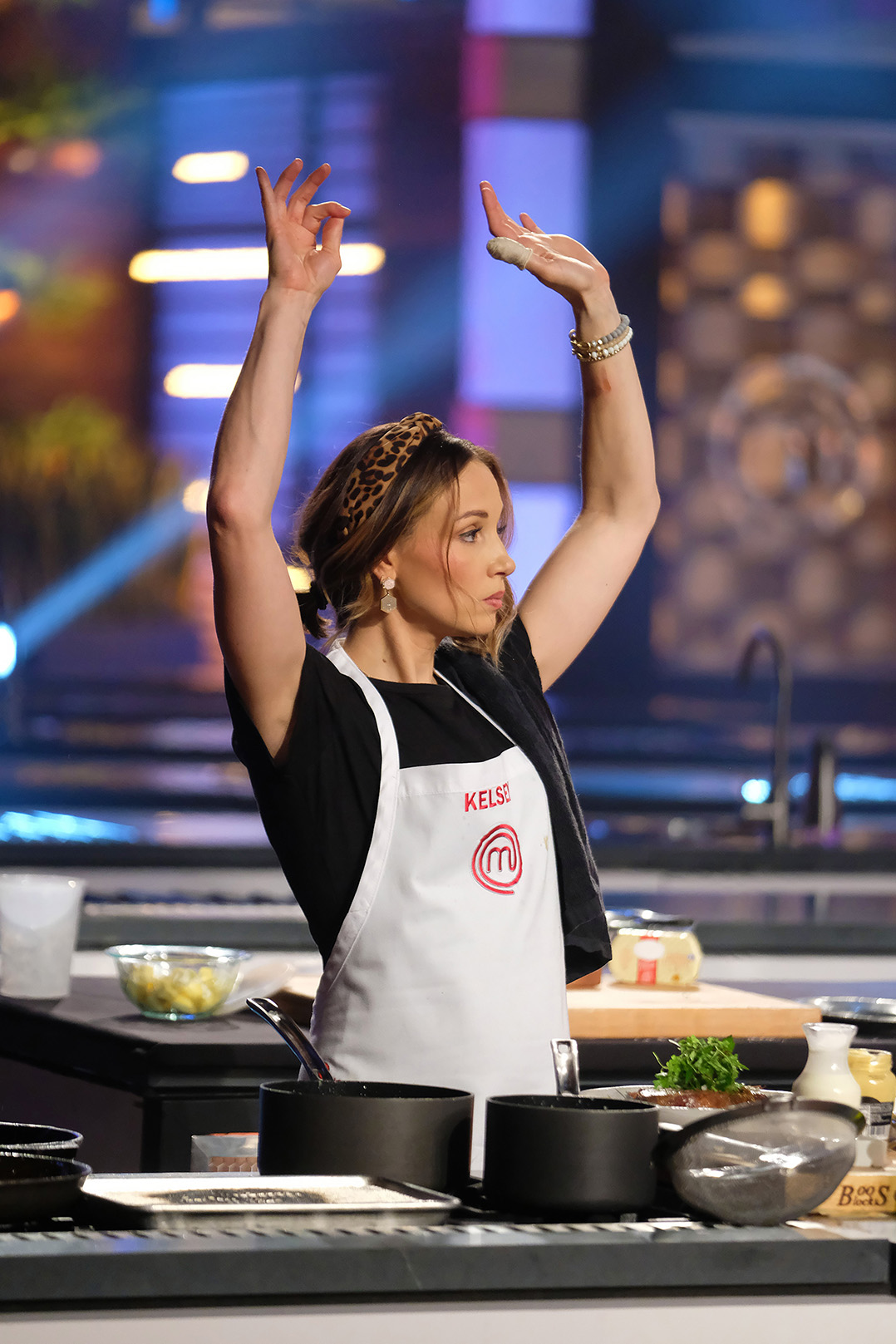 Kelsey Murphy throws her hands up after finishing a competition on Master Chef.

A: It was honestly amazing. It’s just like such a whirlwind and such a cool experience, but obviously super stressful. We were filming pre- and post-pandemic, so that added kind of like a completely different layer to the entire experience. We went out and started filming like in February, March of 2020, and then got shut down because of COVID and then I had to go back out and finish filming seven months later, when I was 25 weeks pregnant with my now 18-month old. So, it was such a high-stress environment, but it was like an awesome learning experience. Not even just like for cooking, but just like, this sounds kind of lame, but like in self-discovery.

A: He just has such a passion for teaching and educating and really getting the best out of everybody. While he does have that persona he plays off on TV, it’s definitely different in real life. He’s not that mean in real life. He’s all about tough love and if you understand that, then I feel like you can learn so much more from him. You know, like when he yells, it’s like, don’t take it personally, it’s just his thing. I respect and look up to him so much.

Q: How did you first get into cooking?

A: I grew up in the kitchen, but it wasn’t until college, honestly, that I began to have a passion for it. Only because, for some reason, I was very attracted to food TV. Like I absolutely loved watching Food Network and all the cooking shows. That’s where I just started to pick up all the little tricks and all my technique and just learned. I just soaked it all in from watching Food Networks. Honestly, I didn’t even read any books or anything, I just watched and learned and practiced.

A: So, if I have a day and I just want to cook one thing for myself or just for fun, I love making homemade pasta. It is definitely like my favorite thing to do. I think there’s just so many possibilities with it. So many shapes of pasta and so many different things you can do with it, and for me it’s so authentic to make the dough and roll pasta and make sauces. So, that is definitely my favorite thing, and it comes from being part Italian I think.

A: I love seafood, I’m a huge seafood fan. Like fresh seafood is something that I’m very passionate about, and if I ever get a more fine-dining establishment, it will definitely be pretty heavy-seafood focus. But if you were to ask me like my all-time two favorite foods, honestly, are French fries and peanut butter.

Q: What do you do when you’re not cooking?

A: Just running around. I have three kids, they’re 5, 3 and 1, so that’s usually what I’m doing. But also, I’m a big exercise person. I love running. And honestly in my free time, I still really enjoy just being in the kitchen. I enjoy making my kids food and doing fun things in the kitchen that aren’t work related.

Q: What would you tell someone who wanted to get into cooking?

A: Don’t be afraid in the kitchen. I think that’s the biggest thing, just experiment. And don’t feel like it has to be perfect. I think that goes with anything that we’re trying to do. I think a lot of times when we’re trying to do something new, we avoid it because we’re afraid we’re not going to be perfect at it right at the beginning. Or we don’t want to put something out there until it’s the best thing ever, and it just takes time. And nowadays, it’s so much easier with the internet and YouTube and all those things to access education, especially in food. You know, there’s such a bounty of information out there that anybody could be a professional chef.

Q: Is there anything else you think people should know about your journey?

A: It’s so important for, at least my story, that I am a mom and I’m still managing parenting and being a mom to these three kids while also building something really big, and I’m going to take this thing as far as I can go. I think that’s just really important, like telling moms that you don’t have to pick just one, you can do both things really well. And it’s not always going to look perfect and it’s always going to be perfect. It goes a long way to bring your kids along for that journey. Like even today, I had my two boys with me today and I brought them to the restaurant while I had to cook, and while it’s certainly not perfect with my babies like running around the back of the kitchen and it’s chaos, they get to watch mom in her element. So, to me, it feels so much more like a family journey than it is just me sacrificing my parenting or sacrificing being with my kids to do my job and build this career. So, that’s really kind of what I’m trying to do and show all like the moms, and even dads, out there that like you can do both.

The Test Kitchen in Fishers opened in 2020 as the restaurant industry was reeling from the COVID-19 pandemic. Now, it remains open as a place for young entrepreneurs to get experience operating a restaurant and experiment with various foods.

“(The Test Kitchen) is a newer concept, but it’s very much a way to show the community that there are fun ideas out there and that there’s really talented people in their community that have the ability to make some really great food,” said Levi Kinney, operations director and owner of Gordito’s Tacos and Tortas.