The Carmel resident, who is an associate professor of computer science at IUPUI, served as coach of the USA Computing Olympiad team and attended the International Olympiad in Informatics in Indonesia. A total of 91 countries sent delegations to attend the Aug. 7-16 competition. 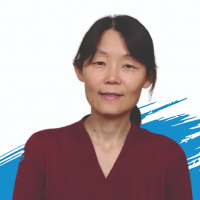 The competition is mainly based on computer programming. Each game has five hours and three questions. Students need to design algorithms and write programs to solve problems within a specific amount of time.

“Our team received three gold medals and one silver medal,” said Xia, the only member of the team from Indiana.

Xia served as a coach for the USA Computing Olympiad camp at Clemson (S.C.) University, which was held May 25 to June 4. The camp invited 20-plus students from the U.S. and selected the top four to represent the U.S. to compete in the International Olympiad in Informatics.

“I would like to continue to attend both events in the future if time allows,” Xia said. “Next year, the (international) contest will be held in Hungry,”

This was Xia’s first visit to Indonesia.

“My best experience was the culture night, which is a big party that we had in front of the Borobudur Temple,” she said. “We had great food. Teams from many countries performed at the party. We sang and danced and had a great time.”