While waiting for a meeting at the Public Works Dept. in Grand Rapids, Mich., Larry Greene had some time on his hands.

“I was waiting all day for a guy who didn’t want to see me, but my boss made me sit there all day until he saw me,’” said Greene, then a civil engineer and regional manager for ADS Environmental Services, which studied water and sewer systems.

“I read it cover to cover and thought, ‘What a great industry,’” Greene said. “My vision was to take the professional side of civil engineering and bring it to home improvement. I wanted to get into something where I could control my own destiny and stay in Carmel. I realized I was fascinated by home and architecture.”

Previously, Greene had contemplated being a home builder but figured remodeling was a better fit. So, he started Case Handyman Services in 2003. It eventually became Case Handyman and Remodeling and then Case Design/Remodeling, and this month it has been rebranded as Worthington Design & Remodeling, as the Carmel company is no longer a franchise affiliated with Case.

“When we came into the business in 2003, we were looking for a way to get that training and support and industry expertise to get our company off the ground,” he said. “That was the initial reason to join. (Case) decided after a number of years they wanted to get out of (franchising). Case Carmel was part of a smaller franchise system the last 10 years. Essentially, the franchise system dwindled to just a few of us. We benefited from it. Heading into our 20th year, it’s time to have our local name, and we don’t need the support as much as we used to.”

“I’m the fifth generation of Lawrence Greene to have Worthington as a middle name,” Greene said. “We thought it had a good distinctive sound to it, but it also was good to have that family tie.”

Greene said his company hired marketing firms to find a name, spending a year on the project.

“Nothing clicked. Someone suggested my middle name,” Greene said. “People like the reason for having a family name. For the employees, it’s an exciting new phase.”

Besides Greene and his wife, Kim, the company started with four other employees. Greene said the company has had between 35 to 40 employees for the last three or four years.

“The biggest growth was 2010 to 2012 coming out of the Recession,” Greene said. “We grew our design teams and added a showroom. We became a true full-service provider for clients and really shifted from handyman to more full-service design, build, remodeling.” 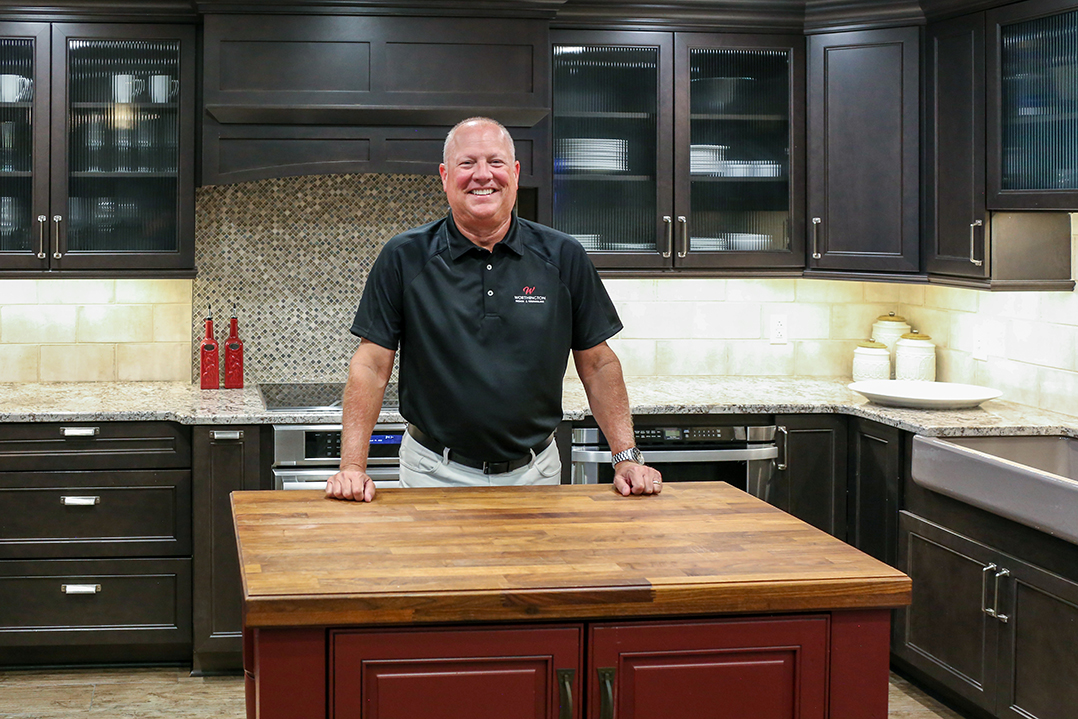 Larry Greene, owner of Worthington Design & Remodeling, pauses in the kitchen area in his company’s office and showroom on Carmel Drive. (Photo by Ann Marie Shambaugh)

Greene said the company moved into a larger office space on Carmel Drive in 2014.

A studio was opened in Indianapolis five years ago and in Zionsville four years ago. Greene said he has a group of five employees he is preparing to run the company day-to-day.

“Then I can be more of the visionary and strategic planner,” Greene said. “It’s a tough business to get bigger and bigger with custom remodeling. We’re focused more on quality and keeping the client.”

Greene said his company is fortunate to have a set of talented carpenters who have been with the company for 15 or more years.

“They’ve been the backbone and have helped us gain our reputation,” he said.

A 1982 Carmel High School graduate, Greene said being known from growing up in Carmel was helpful when the business started.

“We had a lot of connections in the community, and they would have faith and trust that you are going to do a good job,” Greene said. “It was a big help.”

Longtime client Barb Gallina, who lives in Westfield but previously lived in Carmel, said she has used Greene’s company many times at her homes. 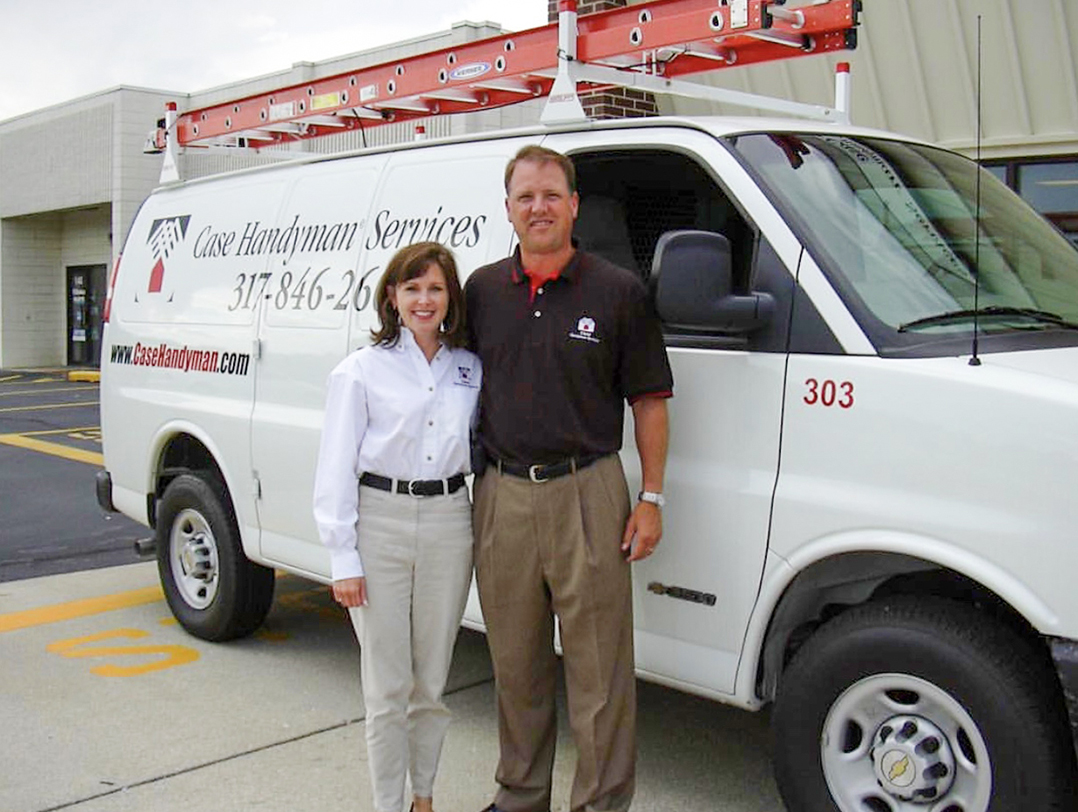 Kim and Larry Greene pause near a company van in 2003, the year they launched Case Handyman Services. (Photo courtesy of Larry Greene)

Personal: Greene’s parents moved from Marshall, Mich., to Carmel in 1972. The oldest of six children, Greene has two brothers and three sisters.

Education: Graduated from Carmel High School in 1982. Was a quarterback for the Class 3A state championship teams in 1980 and 1981, starting in ’81. Graduated from Rose-Hulman Institute of Technology with a bachelor’s degree in civil engineering in 1986.

Work history: First job was in the highway department for the state of Illinois in Champaign. His next job was with a highway design consulting firm in Indianapolis. Served as the city engineer in Noblesville from 1988-91. Following a job as a sales engineer for a company, he worked at ADS Environment Services as a regional manager, studying environmental issues.