You are at:Home»Current in Fishers»Fishers Community»Funeral for Elwood Police. Dept. officer Shahnavaz starts in Fishers 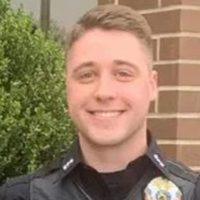 Police vehicles from across the nation lined up this morning to honor fallen Elwood Police Dept. Officer Noah Shahnavaz.

A 2016 Fishers High School graduate, Shahnavaz was fatally shot during a traffic stop in Madison County July 31. The suspect was arrested in Fishers and faces charges of murder after firing multiple rounds at the officer.

The funeral procession was scheduled to start at 11 a.m. at I-Town church in Fishers and make a stop at the Elwood Police Dept. for Shahnavaz’s final 10-42 call and go under Garrison Flag at South 116th Street and Main Street before concluding at Crown Hill Cemetery in Indianapolis.

Shahnavaz, 24, had worked for the Elwood Police Dept. for 11 months after graduating from the Indiana Law Enforcement Academy. Shahnavaz had served in the U.S. Army for five years.