Jen Lis started writing books after becoming a new mom, inspired by true parenting events she thought others would find relatable. The Carmel resident’s oldest son, Gabe, 8, is now co-authoring with her.

Together, they completed and published the book, “I Love You Like a Dinosaur.” It is the fifth book so far under Jen’s independent imprint “Scholarly Hour.” 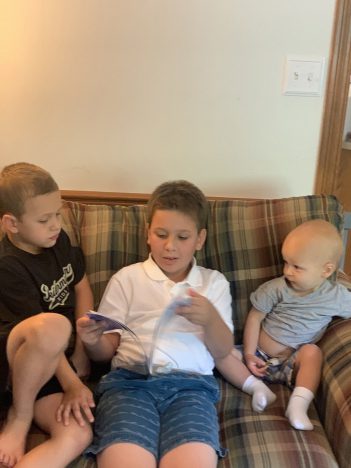 Gabe came up with the dinosaur idea while he was in preschool, and later when the COVID-19 pandemic began, he had time to begin the project. While homeschooling, Gabe worked diligently on the drawings that would eventually become the printed illustrations. The process began with simple sketches that were later traced and colored. The book also features interactive questions and activities.

Gabe, who attends St. Pius X Catholic School in Indianapolis, has been featured as an author librarian at his school, where kindergarteners were given an opportunity to interview him and discuss his writing process.

Jen’s middle son, Gus, plans to follow in his older brother’s footsteps. He has an idea for “Journeys of Patch,” a story about the family’s late dog.

Gabe is working on his next book concept, “EGG Brother Mysteries,” an acronym for Lis brothers Eli, Gus and Gabe, and has also made a couple movies on his own.

“Mom would tell us stories at bedtime about Gus and me growing up and going on adventures,” Gabe said of the book’s inspiration.

Although he plans to eventually become an archeologist, Gabe wants to always write on the side. His next goal is to complete a chapter book by the time he completes elementary school.