Mayor Scott Fadness was at home six years ago when he had an idea that idea would eventually enhance the Nickel Plate Trail.

Fadness cut the ribbon May 13 to a tunnel that runs under the Nickel Plate Trail at 116th Street in downtown Fishers. The event celebrated a component of the Fishers Parks and Recreation Dept.’s mission of creating a community of exploration for residents of all ages.

Fadness said the Nickel Plate Trail took six years to complete and cost nearly $13 million. The trail runs from 106th Street to 146th Street. Indianapolis and Noblesville have plans to continue the trail further south and north, respectively. The trail was formerly the Nickel Plate Railroad.

“(The ribbon cutting) is the culmination of six years of work converting from rail to trail and to celebrate the people who helped make it a reality,” Fishers Director of Communications Ashley Elrod said. “We are excited to invite the community out and see and realize this great new reality in making Fishers a great place to live and work, and there’s more to come.”

Fishers Parks Experience Coordinator Shannon John coordinated the event to celebrate all the work that went into creating and enhancing the Nickel Plate Trail.

Fishers resident Jonna Kavanagh is thrilled with the trail and all the new development happening in Fishers. She walks several times a week with her children and dogs and plans to use the tunnel for safety.

“The trail is making Fishers beautiful and vibrant,” she said. “This is really something to go under (116th Street). Fishers is really growing, and this is a great new addition to downtown Fishers.”

Fadness lauded what he called a “beautiful new piece of infrastructure.”

“As my mother once said to my father, ‘You don’t understand, it’s my inspiration and your perspiration,’” he said.

“There are so many people we need to thank,” Fadness said. “Chris Griesl shepherded this entire legal process to get to where we are today. Without Chris, we wouldn’t have been able to weather the lawsuits and the federal regulations.”

Greisl attended the event with his family.

“This is unbelievable,” he said of the tunnel. “During a visit, we were looking at all the people walking and enjoying lunch, or spending time with their families, utilizing the trail. It was the vision we dreamed of.”

“I’ve been really blessed over the years to work with a city council that is aligned with our vision that believes in what we want to do, puts partisan politics aside and says what’s in the best interest of Fishers and let’s go do it,” Fadness said. “And this city council understood what we were trying to accomplish. They were willing to take the risk, to take the body blows, the social media hits, and thank goodness for it so we can stand here today and enjoy this wonderful piece of infrastructure. Most importantly, our residents do.”

Fadness recalled some of the challenges, such as utility relocation, to complete the project.

“Literally, you could not pick a worst place to build a tunnel in the town of Fishers than right here,” Fadness said. “The amount of utilities that intersect right here is incredible.” 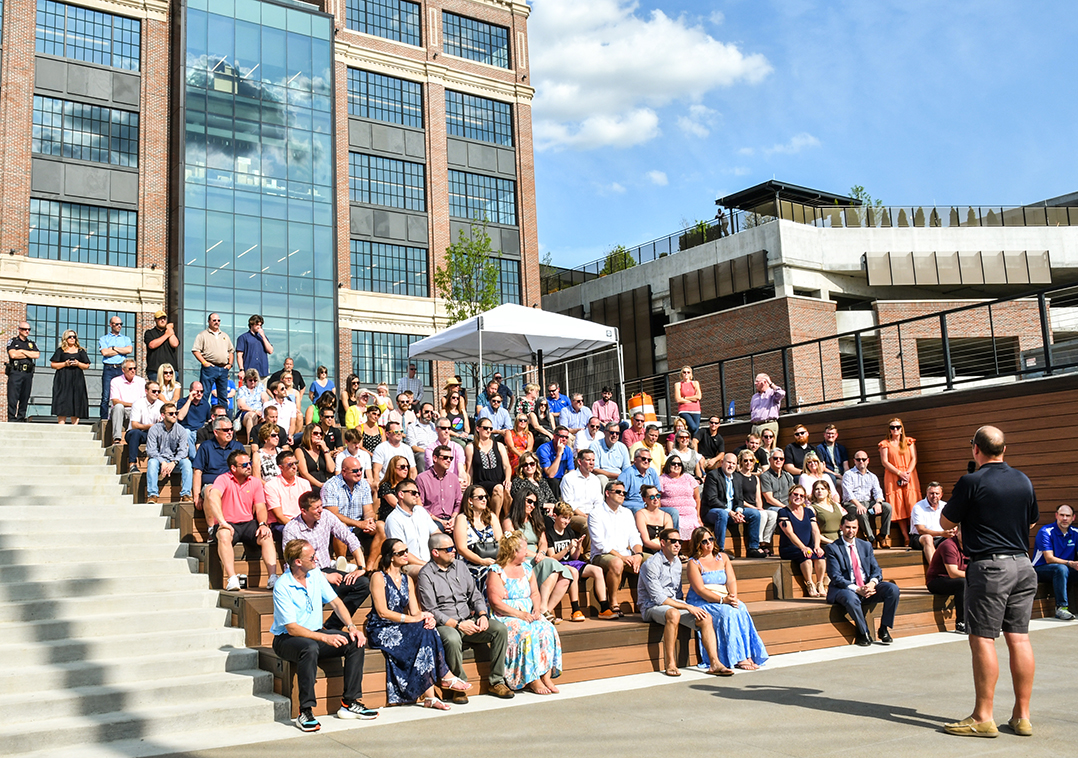 A VIP ceremony celebrating the tunnel opening was May 13. (Photo by Dawn Pearson)

The City of Fishers received more than $4.5 million from the Indiana Dept. of Natural Resources Next Level Trails grants. The city will contribute approximately $900,000 in matching funds. A majority of Fishers’ funds will be used to extend the trail south from 106th Street to 96th Street and construction of a pedestrian bridge over 96th Street.

Funds also will be used to construct a connecting trail from the Berkley Grove neighborhood to the Nickel Plate Trail near 106th Street. Any remaining funds will be used for amenities such as benches, garbage cans, water fountains and dog waste stations.

When those items are funded, Fishers Director of Parks & Recreation Sarah Sandquist said the city will revert back to the trail’s master plan to add enhancements, such as art and other amenities.

Fishers also submitted plans for a trail gap at 131st Street, but it did not receive those funds in the most recent round of grant awards. Fishers Director of Engineering Jason Taylor said the city is already targeting other grants through the DNR to fund the gap.

Taylor said his hope is to start design in the next few months. He said construction could begin as early as spring 2023 and be completed in one construction season.

“We are extremely excited able to partner with Indianapolis and Noblesville and that the DNR recognized the importance of this regional connectivity,” Taylor said. “We are ready to move forward.”