It seems fitting that Theatre Unchained will open its inaugural season with a world premiere.

It also happens to be written by the new organization’s artistic director, Megan Ann Jacobs.

“Coping with Autumn” will have six performances from May 13 through May 21 at Arts for Lawrence’s Theater at the Fort, 8930 Otis Ave., Lawrence. Jacobs said the show’s themes fit with Sexual Assault Awareness Month in April and Mental Health Awareness Month in May. 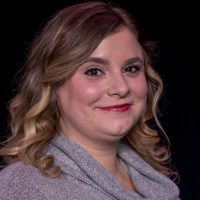 In the play, the character Autumn finds herself in a psychiatric facility for murdering her boyfriend, which she doesn’t recall doing. Her psyche has been evolving to protect her from the abuse of her youth, but her mental defense mechanism personalities of Dee, Joy and Vera are not sure Autumn can stand the stress of a trial.

Jacobs came up with the idea for the play in 2015 and started writing it in late 2017. She finished the first draft through an advanced playwriting workshop in September of 2018 and held a staged reading in November 2018.

“Between 2019 and 2021, the show received several recognitions and awards from semifinalists, to finalists, to third place, to even winning one competition across the country,” Jacobs said. “I think the character of Autumn and her trio, Joy, Dee, and Vera, have lived with me most of my life. It’s been an abstract idea in my head for years, and this show brought it to life. I think we get so good at compartmentalizing in a world that moves so fast and takes no breaks. We also are constantly absorbing other people’s expectations of us which, at least for me, manifests as a lot of pressure — pressure to look, dress, talk, and even act a certain way.

“This can really do a number on one’s self-esteem, and in cases of sexual assault and domestic violence, it can even cause one to push things down and not ask for help.”

There are nine cast members in the show.

“We originally planned a season of four shows and our annual fundraiser, but we had to cut the season short (this year) by one due to the pandemic,” Jacobs said. “In 2023, we will be returning to our four-show season with our annual fundraiser, Talent Unchained. We also will work with other groups on smaller projects.”