J.B. Hayes started playing tennis as a 9-year-old on the clay courts at Danville parks.

Danville Community High School didn’t have a tennis team in those days, so he played some junior tournaments.

“I went to Purdue and went to the first tennis practice,” Hayes said.

When the coach reeled off the travel schedule, Hayes said he didn’t think he could keep pace and make my grades in engineering, so he didn’t play in college.

“That was it until I was 35 years old, and my neighbor asked me if I ever played tennis,” said Hayes, whose career was in civil engineering.

Hayes told him about the 15-year layoff and the neighbor recommended they go hit tennis balls together.

“I’ve been playing ever since,” said the 85-year-old Hayes, who moved to Westfield 21 years ago after living more than 30 years in Carmel. 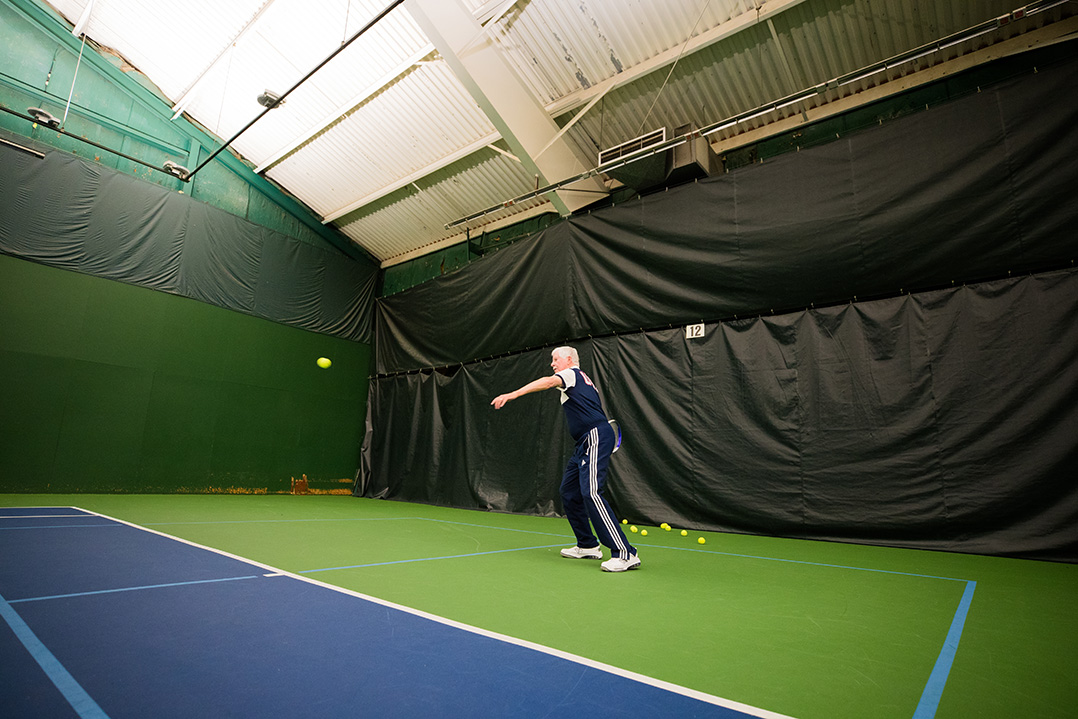 “Then when I turned 55, I seemed to be beating people that I haven’t beaten before,” he said. “When I retired when I was 65, I got a lot better. I could get in shape, and I could travel and play against the better players. But I didn’t win any national tournaments until I was 80. I guess it’s because I’m outliving people.”

Hayes said a woman sat down beside him at a tennis tournament and asked which of his body parts, like a hip or knee, had he had replaced.

“I said, ‘Nothing,’ and she said, ‘You must be the only person here that hasn’t,’” Hayes said.

Hayes said he has good genes and was a good athlete in high school, playing football, basketball, baseball and track and field at Danville Community High School. He held the school’s 1-mile record for a decade. He was inducted into the school’s Hall of Fame in 2015.

“I watch what I eat and don’t drink a lot,” he said. “I work out at the Carmel Total Fitness three days a week. My wife, Anne, and I go over there. Then I play tennis two or three times a week.”

Hayes said he enjoys the camaraderie playing in tournaments.

“I enjoy the traveling and I really enjoy the competition,” he said. “I hate to lose. I’m not a very good loser. I just get mad at myself for not doing what I’m capable of doing.”

Hayes said a strong serve had always been the best part of his game.

“J.B. is a very strong competitor who never gives up,” Sanders said. “He is very consistent with his game and helps his partner be better. I think that we play well together and (I) enjoy playing with him very much.”

Hayes finished 2021 ranked No. 2 in singles and No. 1 in doubles in United States Tennis Association’s men’s 85-and-older rankings. Hayes and Sanders were ranked No. 1 as a doubles team.

“I play on grass once a year and it’s my favorite surface,” he said.

“One claim to fame I have is I beat Todd Witsken,” Hayes said. “The clue to that (is), he was 12 years old and I played him in a Woodland Springs neighborhood tournament. He made it to the finals.”

Witsken, who died of brain cancer at age 34 in 1998, had a successful ATP Tour career.

In his first year in the 85-and-older division in 2021, Hayes, who turns 86 in August, won five national titles: three in doubles and two in singles. He was selected to represent the U.S. on the Super Senior International team, but the USTA decided not to send the team because of Mallorca, Spain because of the COVID-19 pandemic.