Volleyballs aren’t the only thing being spiked by boys in Hamilton Southeastern Schools’ two high schools, Fishers and Hamilton Southeastern. Participation rates in the club sport are spiking as well as the sport gains popularity on its way to becoming an Indiana High School Athletic Association-sanctioned sport.

Hamilton Southeastern High School coach Jon Harmon was scrambling to field a varsity squad when he returned to the school in 2018 for a second turn as boys volleyball coach after a 10-year run at Carmel High School, where his teams earned three Indiana Boys Volleyball Coaches Association state championships. Eight seniors on that 2018 spring roster were playing their first year of club volleyball. This season, there are no first-year seniors. Harmon had to cut nine players this year, the first time he has had to trim the numbers by that much. Thirty-five boys play on three teams (two junior varsity and a varsity team) at HSE.

The program is flourishing at the high school level. The team has a 14-3 record this year and a junior high feeder program has been established, too.

“Not every kid can make the basketball team,” Harmon said. “They need an outlet, a need to represent their school, and boys volleyball is a great opportunity for that.”

Moreover, Harmon said the sport itself is attractive.

“The game is played above the net. It’s an explosive sport,” Harmon said. “The boys understand how much fun it is.”

It’s the same story at Fishers High School, where Carlos Capo heads the program. The Tigers have won the last two state championships, held in 2019 and 2021. Former player Aaron Hernandez is playing NCAA Division I volleyball at Ball State University, historically one of the nation’s top men’s collegiate programs.

At FHS, 51 boys are playing on four teams (freshman, two junior varsity and a varsity team). In 2015, there were only 22 players in the program. The varsity team sports an 11-5 record and, like Hamilton Southeastern, is one of the top-ranked teams in the state.

Capo said boys volleyball has been “exploding” in popularity the last two years, and like Harmon, he sees the nature of the sport as the reason.

“It’s a competitive sport in a team environment,” he said. “And especially in bigger high schools you have kids that don’t have a spring sport, and this gives them a chance to represent their high school in a team sport.”

“When everything was shut down, all you needed was a volleyball and you could play with friends outdoors, so I’m sure that helped as well,” he said.

The social nature of volleyball is often cited as one of its most attractive attributes.

Harmon and Capo, who are good friends, credit their respective athletic departments with tremendous support for an endeavor that, while representing the school, doesn’t have varsity status.

“A ton of credit to the Hamilton Southeastern athletic department,” Harmon said. “(Athletic directors) Jim Self and Greg Habegger and the entire administration has been incredibly supportive of the program. Whatever we ask for, we receive.”

The future appears bright for boys volleyball. Next month the IHSAA will vote whether to designate it as an “emerging sport,” which is the first step to becoming an officially IHSAA-sanctioned sport. 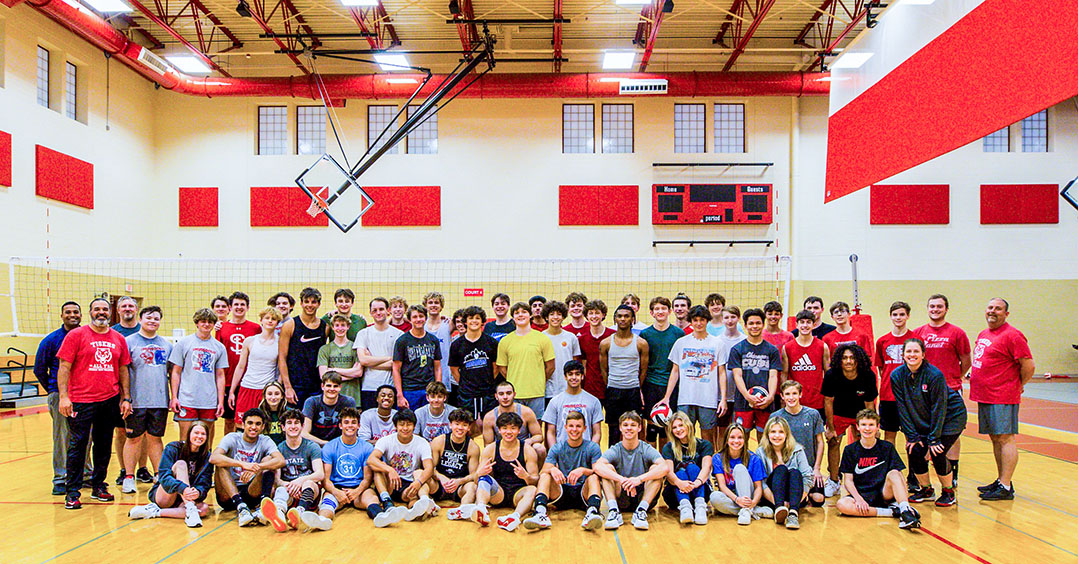 The road to boys volleyball becoming an IHSAA-sanctioned sport begins on the northside of Indianapolis May 2. It is there, at the association’s headquarters, where the organization’s board of directors will decide whether to declare boys volleyball an “emerging sport,” per its bylaws.

The two-step test to meet the “emerging sport” designation is simple.

First, there needs to be at least 20 participating high schools playing the sport. There are currently 54 high schools with boys volleyball club teams.

Second, the board needs to see letters of support, which have been received.

If designated an “emerging sport,” boys volleyball will be assigned to an assistant IHSAA commissioner, and the dialogue with coaches on rules, playing seasons and other details would begin, all with the goal of getting the sport “recognized” by the IHSAA. To become a “recognized” sport, IHSAAbylaws mandate that 150 IHSAA-member schools must participate with 40 from each of the association’s three districts. There are 407 high schools in the IHSAA.

Twenty states sanction boys volleyball as an official sport with a state championship, and the number keeps growing. Utah, Delaware and Ohio have all sanctioned the sport this year, with the Buckeye state recognizing it last month.

“We’re going to continue to provide sources for growth with the hope in a few short years it could become a recognized sport and then we would offer a state tournament in that sport,” IHSAA Commissioner Paul Neidig said.

Neidig said boys volleyball has become more popular throughout Indiana, especially in central Indiana, and in pockets in the northwest part of the state.