A 4-foot-wide ditch runs the length of Robert Schlafer’s Lawrence home on Rainbow Lane. It is always filled with stagnant water, which is sometimes several feet deep, even during dry spells.

But standing water is only one issue Schlafer deals with because of the area’s poor stormwater infrastructure.

When Schlafer built and moved into his home in 2019, he was aware of some flooding issues but wasn’t overly concerned because of a comprehensive plan outlined by the city to fix the problems. Yet several years later, the problems haven’t been resolved. 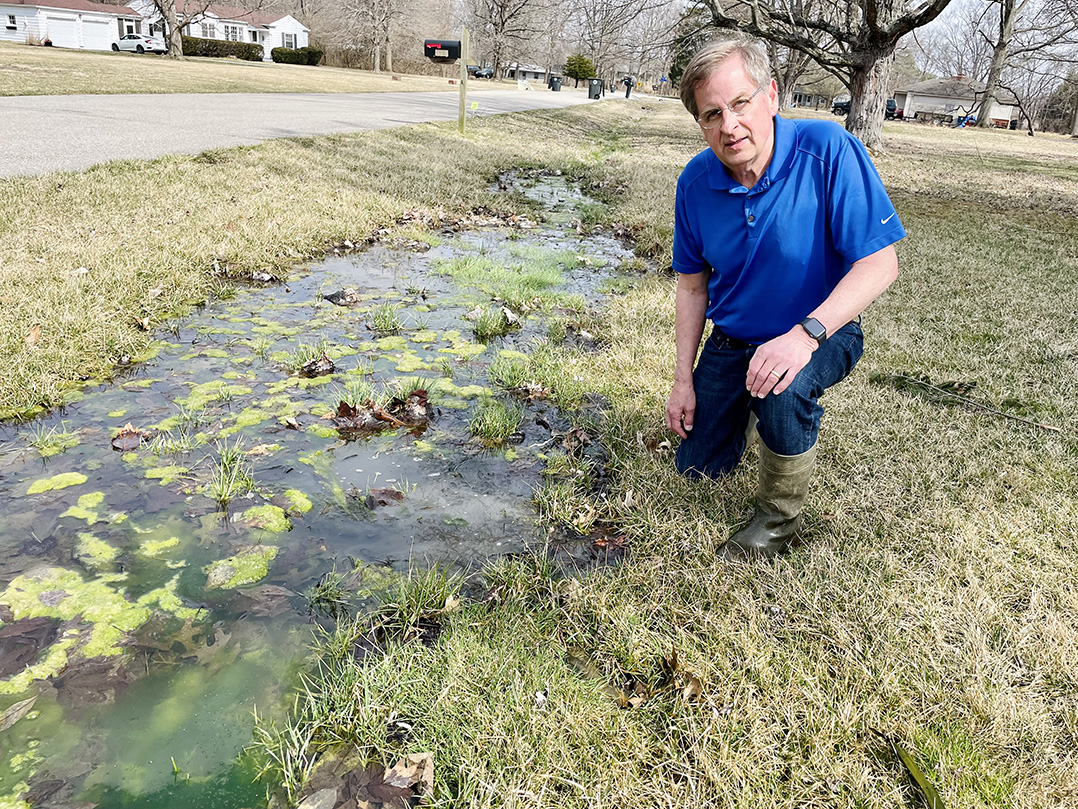 Lawrence resident Robert Schlafer crouches near the ditch in front of his home.

The Lawrence Common Council and the City of Lawrence are working on a funding plan to improve stormwater infrastructure throughout the city. In 2003, the cities of Lawrence, Speedway, Beech Grove and Southport entered a memorandum of understanding with Marion County, in which Marion County would collect stormwater fees from those cities, then use those fees for projects within those cities.

“They would take care of all stormwater projects throughout Marion County, with the understanding that any fees Lawrence residents paid were used for City of Lawrence projects,” Lawrence Mayor Steve Collier said. “That didn’t happen, so we got way behind (on stormwater projects).”

The City of Lawrence has since separated from the memorandum and established its own stormwater fund. Lawrence began collecting fees last year.

“Nothing has been done for 20-plus years. Infrastructure was left unattended for a couple decades,” Collier said.

When much of the stormwater infrastructure was installed in the 1950s and ‘60s, pipes were a quarter- to a half-inch wide, which could accommodate roughly 1 inch of rainfall. But Lawrence occasionally sees 2 to 3 inches of rainfall at a time, causing more stress on the system.

“It’s important for us to have money in that stormwater fund so we can do like most other cities and towns in central Indiana and use that money as capital to go seek a bond,” Collier said.

Roughly $12 million of stormwater improvements are needed, especially on the west side of Lawrence. Projects include new ditches, new pipes and new stormwater sewers.

Lawrence proposed a $12 million bond last year to fund 12 stormwater projects, which was rejected by the common council. The city revised its request and eliminated seven of projects and proposed an $8 million bond at a March council meeting. But the council denied the request and proposes using a portion of the city’s American Rescue Plan Act funds and stormwater fees to pay for the projects.
Common council member and finance committee chair Shawn Denney said the council expects to vote on allocating ARPA funds for stormwater projects at its April 4 meeting. Denney said the timeline to complete the projects with a bond was four to five years. He said the projects can be completed in the same time frame without issuing a bond.

The council plans to complete $7.8 million worth of stormwater projects through 2024. Approximately $12 million worth of work is needed according to Collier and the city’s public works department. Collier estimates the amount of work to increase annually as more infrastructure fails.

“Regardless of which way it went, if we looked at bonds or different funding for the project, the entire process would take four to five years, regardless of how it was funded,” Denney said. “There will be other projects after this round of funding goes through.”

Each year through 2024, $1.4 million will be spent from the stormwater fund. The council wants to use $3.6 million from ARPA funds. If all the money is spent, that still leaves roughly $3 million worth of projects to be addressed after 2024.

“That could be a bond or a short-term bank note,” Denney said. “After these projects are done, the (stormwater) funds still need to be available to do other projects.”

Collier is concerned that if the city doesn’t issue bonds for the projects at the same time, more projects will arise in the time it takes to fix existing issues. 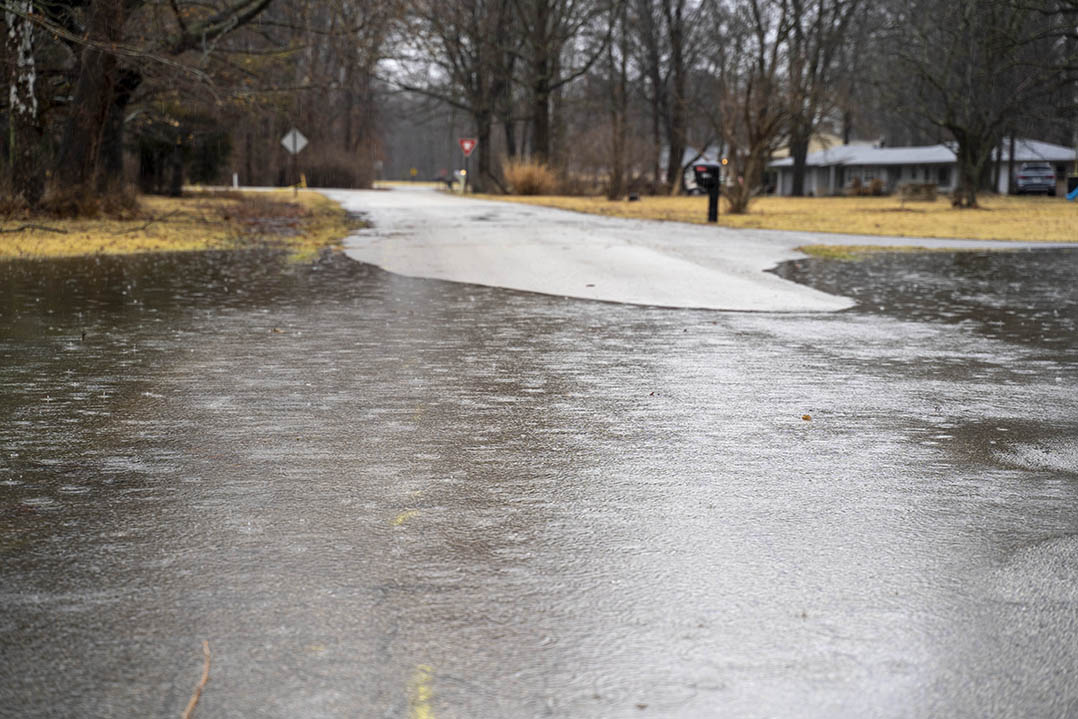 Flooding is common on Rainbow Lane in Lawrence. Water often covers the road. (Photo courtesy of City of Lawrence)

Robert Schlafer said the ditch in his front yard is a breeding ground for mosquitos. He said the Marion County Health Dept. often takes samples of mosquito larva. Because of the soft ground, while mowing the ditch –which is Schlafer’s responsibility – the mower flipped and landed on top of him. He was not injured, as the mower shut down when it flipped. Another time, while wearing rubber boots, he stepped in the water and the mud was so deep it sucked his boot in.

When the ground later hardened, the boot was buried, and Schlafer hasn’t seen it since.

Schlafer said sometimes during heavy rain, his neighbors can’t leave their house because the water reaches the front door.

“This is a health and safety concern,” Schlafer said.