Hamilton County Sheriff’s Office reserve deputy Neal Hoard and his K-9 bloodhound Maudie often play a game of hide and seek. The person hiding can vary from an elderly person who wandered off, a lost child or a bad guy running from police, but the objective is the same: find them.

Hoard, 60, and the 4 1/2-year-old bloodhound have worked together for more than four years. Maudie is Hoard’s fourth bloodhound. Hoard began working search and rescue 23 years ago with Midwest Search Dogs. In 2006, he was sworn in as a sheriff’s reserve deputy.

As a reserve deputy, Hoard is required to work 24 hours a month patrolling the streets. He’s on call with Maudie whenever a search and rescue is needed, regardless of the time or day. As a reservist, Hoard must keep up with all the training required of a merit officer.

“We are available for callout all the time. It could be 3 in the morning or 3 in the afternoon,” said Hoard, a Westfield resident who works as a carpenter when not tracking missing persons. “We could look for anybody who is young or old, good or bad that’s walked away from a scene that we need to find.”

In her lifetime, Maudie has had approximately 25 successful callouts. Hoard and Maudie respond to calls across central Indiana.

“Not all of our tracks end in a find, but I had a call a few days ago up in Clinton County for a 13-year-old missing girl, and we started, and my dog didn’t go anywhere,” Hoard said. “She didn’t take me out of the yard. So, I asked the officers, ‘Did you search the house?’ And they’re like, ‘Yeah,’ so I took her out and she did it again.”

“They would just be in the way,” Hoard said.

Again, Maudie didn’t leave the yard. Clinton County deputies re-searched the house, garage and property and found the girl hiding in the garage underneath a trailer.

“So, I didn’t find her, but my dog did what she was supposed to do,” Hoard said.

When Hoard is tracking a criminal suspect, he’s joined by a 12-man tactical team and two German shepherd K-9s.

“They (officers) are armed to the tooth and I’m out front. There’s two guys right beside me as point men, and hopefully they’ll see the bad guy before I do because I’m concentrating on (Maudie),” Hoard said.

With a previous bloodhound, Hoard tracked an active shooter in Pendleton and a murder suspect in Lapel. The last criminal suspect he tracked was during a domestic battery situation in which the suspect left on foot. Maudie is one of three bloodhound K-9s in central Indiana.

One of the perks of being a K-9 officer with a bloodhound is, Maudie isn’t subject to the requirements of other K-9s, such as being trained as a bite dog.

“Her life is more normal because she’s a bloodhound rather than a patrol dog,” Hoard said. “Patrol dogs are kept isolated from family members, but Maudie is not trained to bite. If she would bite somebody, it would be for a reason any other dog would have bit somebody. Maudie does get to come inside. (Bloodhounds) are very social, they’re trained to be that way. We could be looking for a bad guy and she still thinks she’s looking for Santa Claus.”

When Maudie retires, probably around 8 or 9 years old, Hoard will keep her as a family pet. 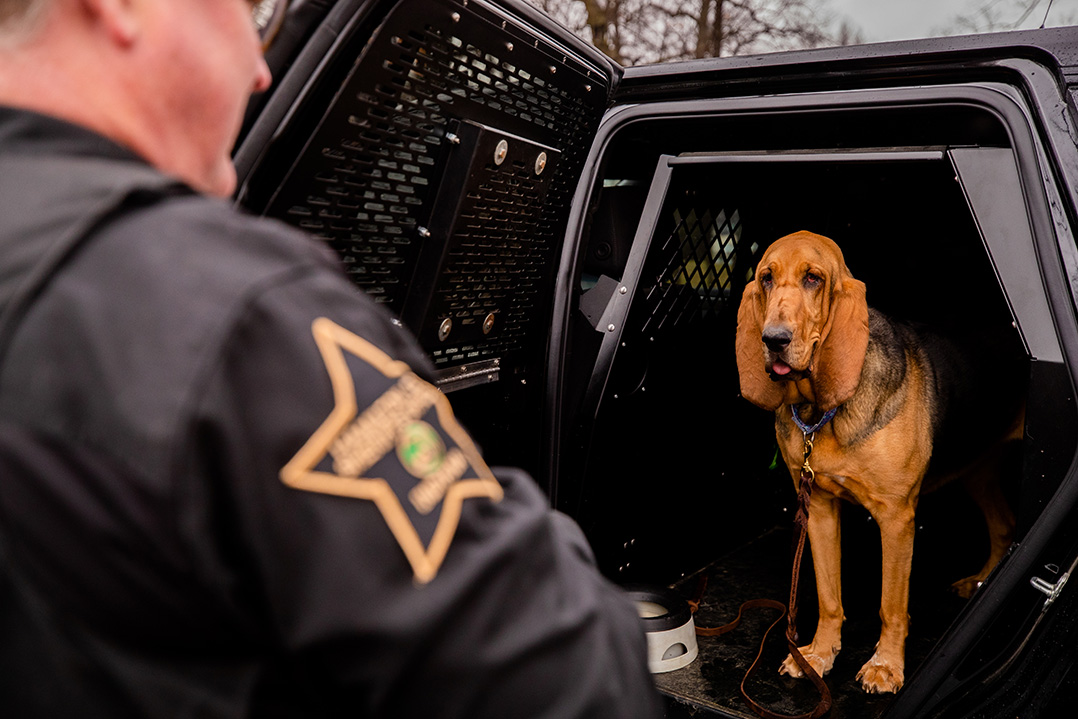 Neal Hoard and Maudie have worked together for more than four years.

One of Hamilton County Sheriff’s Office reserve deputy Neal Hoard’s callouts was Feb. 14 to an address in Carmel, where a boy with autism left the house. He had been missing for approximately two hours by the time Hoard and his bloodhound K-9 Maudie arrived on the scene.

After tracking the trail for a short while, Hoard noticed two right footprints in the snow, and he knew it was the boy’s footprints because he was wearing two right shoes when he left the house.

Maudie followed the trail up to some garage doors and sniffed the door handles. Hoard realized the boy was trying to get inside out of the cold. Maudie is trained to indicate at a door handle if she knows the person went inside a building, but she wasn’t indicating.

“We kept going and we went up this driveway and the garage door is open, and she starts lighting up because she gets excited when she knows she’s close,” Hoard said. “We go through the garage, and nothing is in there, so we turn around and see him sitting in the car trying to get out of the cold.”