Many people around the world have been affected by the war in Ukraine, be it higher gas prices or knowing someone with family in the region. But for one Zionsville resident, the war is a little too close to home.

Lance Schwab is the co-owner of Tegra, an agriculture-based farming company founded in 2015 with three farming centers in the eastern farmlands near the port city of Kherson, Ukraine. Schwab said Kherson was the first Ukrainian city to be seized by the Russian military. 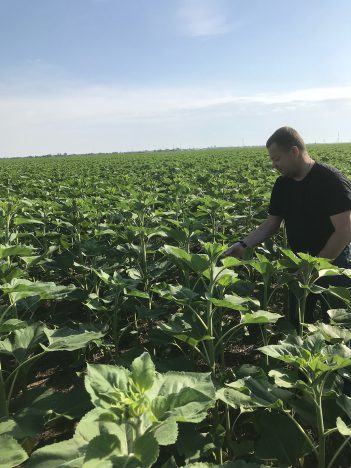 Ruslan, who was allegedly assaulted by Russian soldiers and hospitalized, works on the farm. (Photo courtesy of Lance Schwab)

Tegra owns and operates three farming centers in the Kherson region totaling more than 7,500 acres. Crops include corn, soybeans, sunflowers, wheat, field peas and high-quality dairy alfalfa. The company also imports and sells irrigation equipment and farm inputs, such as seed and biological inoculants, to other farms in the area.

“I personally spend about three to four months a year in Ukraine, over half a dozen trips throughout the year,” said Schwab, who co-owns the company with his father, Jon. “My family has gone with me there for a month in the spring several times. But I don’t know about the future anymore.”

Although two of Tegra’s farming centers are near active fighting, Schwab said that his farms are still generally intact. However, the war has adversely affected the company and its workers in other ways.

“We can’t find fuel for tractors. There’s none anywhere,” Schwab said. “Trade has been halted. The country relies heavily on importing goods, but everything is shut down. It’s impossible. It’s all stuck outside of the country, and what is actually within the country, you can’t get to. The war has been a huge interruption.

“Farming is a system that you need to plan months ahead, and now all these plans that have been put into motion, there’s been literal bombs dropped on it all. And we don’t know what’s going to happen in the next days, weeks and months.”

Aside from economic implications, there has also been the threat of physical danger, with one of Tegra’s farm directors, Ruslan, being hospitalized after being assaulted by Russian soldiers, according to Schwab. He also said that the soldiers took Ruslan’s car and passport. He has since recovered. 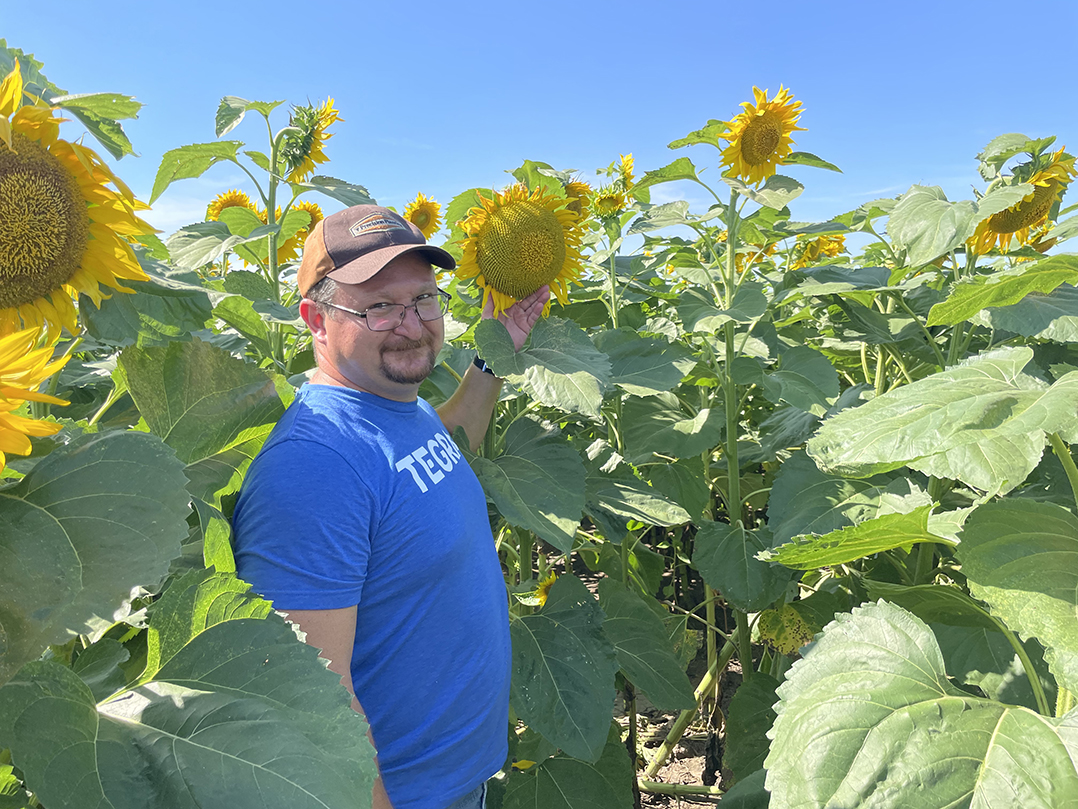 Volodya, a farm director for Tegra and close friend of Schwab’s, pauses in the sunflower farm. (Photo courtesy of Lance Schwab)

Another farm director, Volodya, moved his family to safety and then returned to fight.

“He called me at 2 in the morning and told me he was going to drive his family out west to safety and come back to the frontlines to fight in his hometown,” Schwab said. “He’s a 36-year old man with a wife and two kids, and he’s putting his life on the line to protect his home. He is tough. Ukrainians, as a whole, are tough people. It’s inspiring.”

When Current asked Voloyda why he decided to come back to the frontlines, Volodya emailed the following response:

“To me and to all Ukrainians it is obvious that on 24 of February 2022, (the) Russian Federation declared war not only against Ukraine but also against (the) whole civilized world and humanity. Invading Ukraine ‘to liberate’ Ukrainians, (the) Russians went against all values that peaceful nations are proud of.

“These weeks. Ukraine has experienced a lot of sufferings: deaths and casualties among civilians, ruined homes, over 1.5 (million) had to leave their homes and flee abroad to save their lives. But, at the same time Ukraine proved (to) the world, including Russia, that (a) free nation defending its Motherland can effectively stand against the horde of slaves ruled by tyrant(s).

“We will win this war and will never forget its lessons. We won’t let our children forget them.”

Although Ukrainian leaders knew an invasion was possible, Schwab said that most people, including his employees in Kherson, were simply going about their daily lives until it all began. His workers saw some of the first tanks coming through the region while farming one morning.

“My employees called me one morning, days before the invasion, and told me they were going to start planting, but called me back just two hours later with news that there was a tank battalion passing by. That’s when we knew it was for real,” Schwab said.

Schwab’s farms were still partially operating as of March 16, but he said supplies are low and the Russians have barred his employees from planting new crops. Aside from that, Schwab fears that the reports of Russians seizing farming equipment, such as tractors and trucks, will reach Tegra soon. 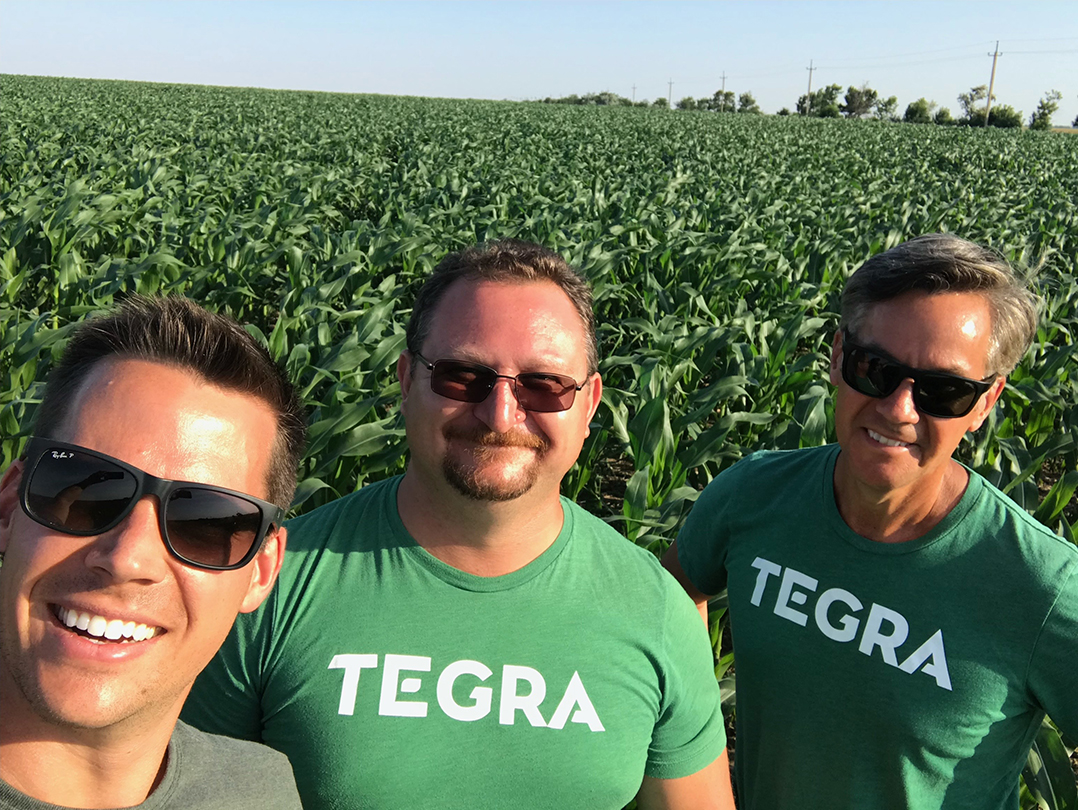 Hope for the future

Despite the hardships that his workers and he himself have faced since the invasion, Schwab said the global support for Ukraine has given him hope for the future.

“I think the world is finding its moral compass,” Schwab said. “Every single one of our suppliers that we work with have been incredibly supportive, incredibly flexible and human.”

Schwab said that he is seeing “ground-level support” from the people in Ukraine.