Restoration projects are nothing new to Turner Woodard.

The 73-year-old developer recently turned his attention to Carmel, where he’s renovating three aging buildings and giving them new life. But he’s been doing that for decades in his hometown of Indianapolis, where he got his start refurbishing sports cars as a high school student before eventually purchasing and refreshing landmarks like the former Stutz automobile factory and the famed Canterbury Hotel.

From cars to buildings to paint on canvas, Woodard said the process of transformation has long intrigued him.

“It gives me and my staff and my team great joy,” Woodard said. 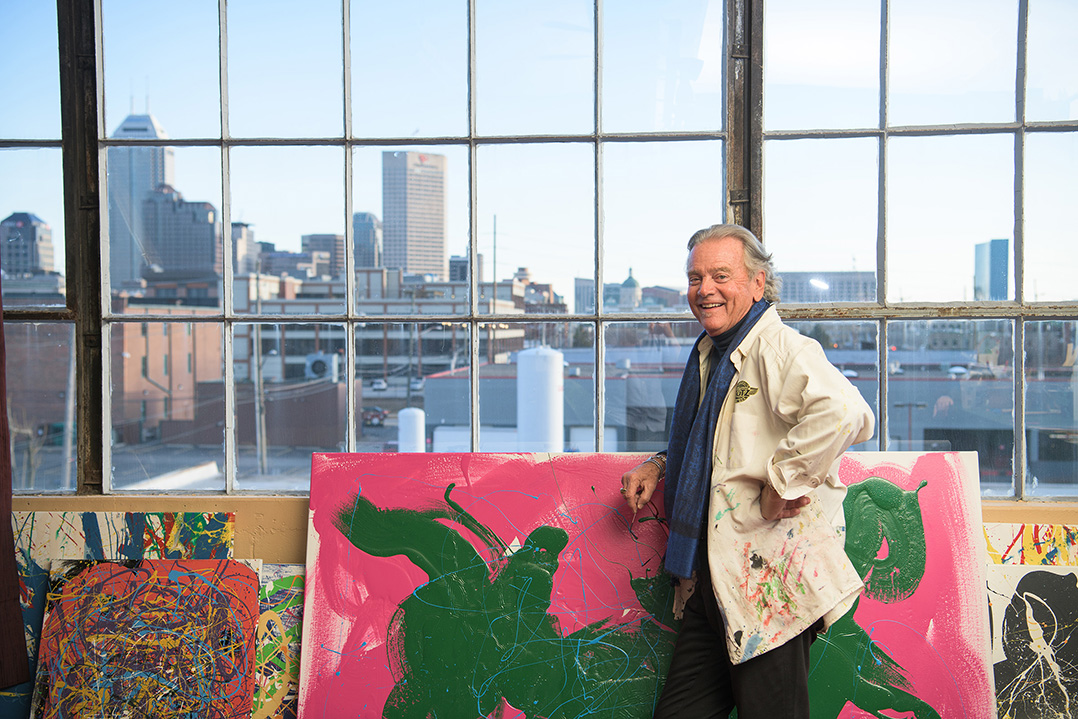 Woodard, an Indianapolis native, graduated from Park School, now known as Park Tudor, before heading to college at the University of Denver. He dropped out after two years to attend the Jim Russell motor racing school in Southern California, where he met actor Steve McQueen.

“He was preparing to film the movie, ‘Le Mans,’” Woodard said. “The insurance company mandated that he go to driving school before they insured the film.”

Woodard raced sports cars and IndyCars professionally, although he fell short of competing in his hometown’s biggest event: Indianapolis 500. His work restoring cars helped fund his racing, and it led to his career in real estate, as he began purchasing properties and fixing them up, too.

He refurbished duplexes, apartments and warehouse spaces before turning his attention to the former Stutz automobile factory, which ceased operations in the 1930s. Woodard bought the 400,000-square-foot building in 1992 and transformed it into a small business incubator before selling it in early 2021.

Looking to take advantage of tax law that allows investors to avoid paying capital gains taxes after selling a property by investing in other real estate, Woodard began looking for his next restoration project. He searched throughout central Indiana before learning that the Rich Furniture building, which he had visited decades ago while shopping for lamps, was for sale in central Carmel.

“I never forgot the little building with the beautiful balconies and four-story atrium and glass elevator,” Woodard said.

Woodard purchased the building at 1030 S. Range Line Rd. in 2021 and got to work transforming it into boutique office space. He moved the bar from the Canterbury Hotel, which is now Le Meridien Indianapolis, to the lower level of the building, where he also displays art and several of his vintage vehicles. His office is on the top floor of what is now known as the Turner James building.

“Being part of this new (to me) community is very much invigorating,” Woodard said. “I still live in a wonderful old home we restored on North Meridian Street (in Indianapolis), and I kept my art studio downtown at the Stutz factory. I have other properties off Mass Ave and Virginia Avenue that keep my ties and appreciation to Indianapolis, but my car turns (north) out of my driveway now, and I’m glad for that.”

As the Turner James building renovations near completion, Woodard is beginning work to transform two other properties recently acquired near the Monon Greenway in Carmel: the Keltner Business Plaza and the former Horton fan factory.

Woodard said he intends to restore the Keltner Business Plaza at 520 W. Carmel Dr. to its original design to house approximately eight tenants in 3,500-square-foot spaces. He expects it will primarily include office space near the front of the building with warehousing in the back.

Plans for the former 80,000-square-foot Horton fan factory building at 201 W. Carmel Dr. aren’t as clear, although Woodard plans to relocate Team Woodard Racing to it. Other possibilities include a makerspace concept, last-mile distribution center, storage for car collectors or space for startup companies. 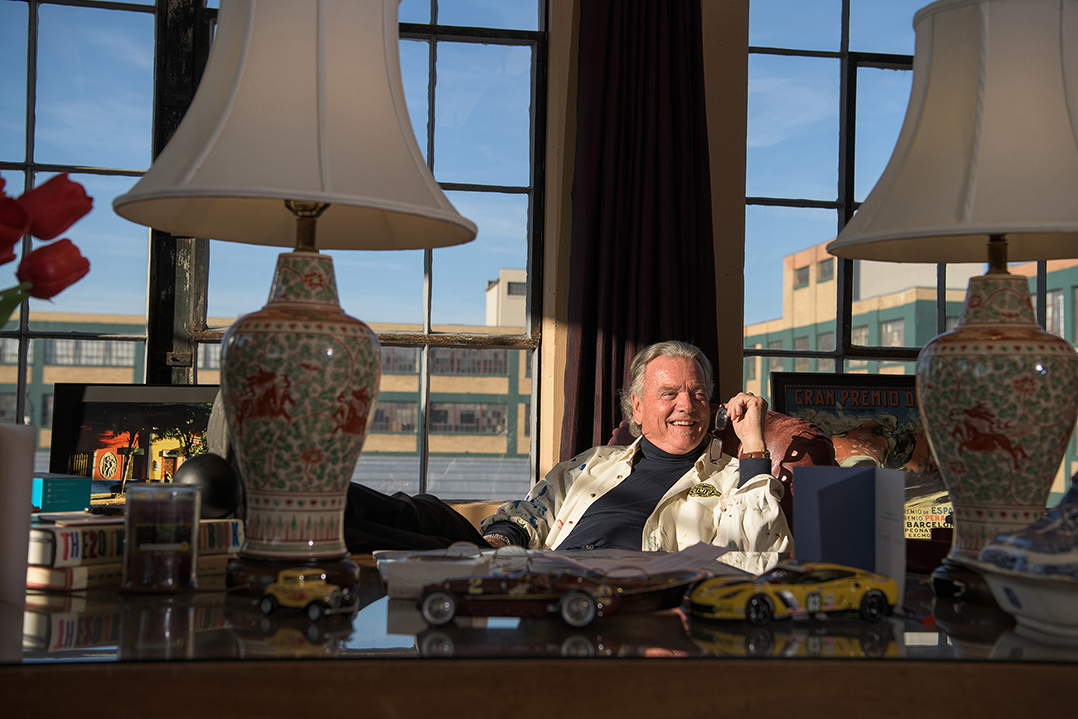 Woodard’s efforts to revitalize old buildings stand in contrast to many other redevelopment projects in Carmel, including by the Carmel Redevelopment Commission, to tear down and rebuild bigger. Woodard said he didn’t know how his philosophy of “adaptive reuse” would be viewed by the city’s leaders, but he said so far, they’ve been receptive to his plans.

“I wondered how some of my ideas would be embraced, but (city leaders) absolutely have embraced them,” Woodard said. “The mayor and his staff and his team are a phone call away.”

Carmel Mayor Jim Brainard said city officials have welcomed Woodard’s investment in Carmel and that they have regular discussions with his team about his work and potential tenants.

“If an existing structure can be redesigned and safely and effectively renovated for new uses, then we certainly welcome that,” Brainard said. “The mix of styles and architecture help give our city character. Renovating buildings with a history to them and adapting them for new uses, such as Turner is doing, are equally important (as new construction) to a vibrant, livable downtown.”

Woodard said he looks at 10 or 20 properties for every building he decides to refurbish, and he doesn’t know if he’ll take on any additional projects in Carmel. 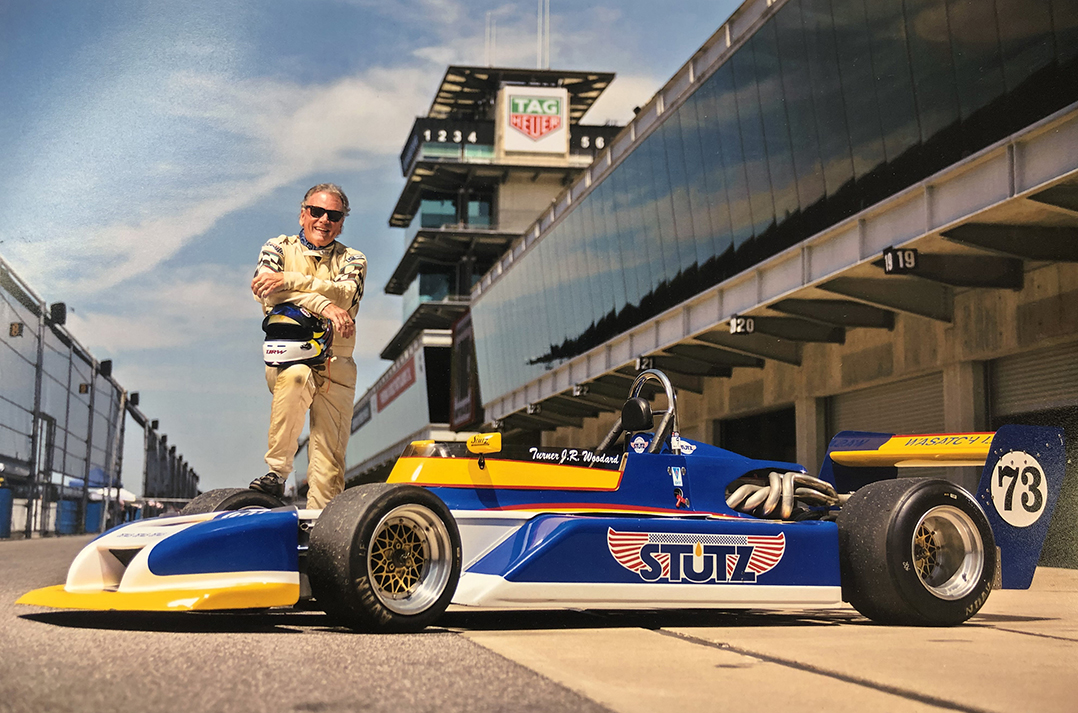 ‘Back on the track’

It’s been several years since Turner Woodard has raced cars professionally, but he still enjoys competing behind the wheel.

Woodard enters several events per year in the Sportscar Vintage Racing Association, which he said, “Generally refers to the cars, not the drivers.”

“They’re a very vibrant racing series for people like myself who have collected these cars for years but want to get them back on the track,” he said, adding that his racing shop will be in the former Horton fan factory building.

Woodard drives a 1979 March Formula Atlantic and a 1975 Chevron 2-Liter sports car in the SVRA races.

Despite his experience as a professional driver, Woodard said he’s still getting used to maneuvering through all the roundabouts in Carmel.

“I’m still learning them and which lane to be in,” he said. “Coming from Indianapolis, it took a little getting used to, but you can understand their benefits.”