You are at:Home»Current in Carmel»Carmel Community»Experts weigh in on backdrop in Moms for Liberty photo 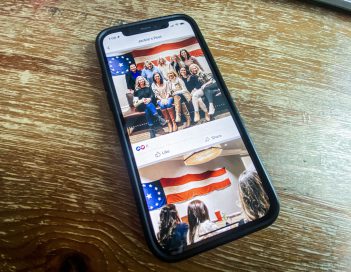 Photos shared publicly on Facebook showing the Moms for Liberty of Hamilton County founding members in front of a banner that shares similarities to the original flag used by the Confederate States of America. (Photo by Zach Ross)

An image posted publicly to Facebook showing the Moms for Liberty of Hamilton County founding members pausing for a photo at a private residence led to various reactions on social media among those who noticed that a banner hanging behind the group had similarities to the original flag used by the Confederate States of America.

The group’s chairperson, Paige Miller, said the design does not represent or show support for the Confederacy.

“It was just on the wall, and we thought it would make a nice backdrop,” she said.

Miller provided an email with comments on the banner from the American Legion’s Americanism Division, which exists in part to provide education and protection of the U.S. flag and which Moms for Liberty asked to provide clarification on the backdrop.

“The photo you sent me reflects a patriotic bunting, not a flag,” stated Ann Byers of the Legion’s Americanism Division. “It also is not a Confederate flag or ‘stars and bars.’ In short, the photo was taken in front of a decorative piece that is red, white and blue.”

Experts contacted by Current disagreed on the symbolism displayed in the banner.

Carole Emberton, an associate professor of history who specializes in the American Civil War era at State University of New York at Buffalo, said it appears the banner is designed to reflect the Confederate flag.

“You can move the star around and change the color of it, but it still is what it is,” said Emberton, adding that many people may not recognize the symbolism as being tied to the Confederacy because the Confederate battle flag is the one most commonly associated with it.

But Peter Ansoff, president of the North American Vexillological Association, a membership-based organization for people who study flags, said any resemblance to the first Confederate national flag “is just a coincidence.”

“The banner in the photo has no connection to Confederate flags,” Ansoff stated. “In fact, it’s actually not even a flag – it’s a decorative streamer called a ‘pull down,’ which is designed to be displayed vertically, against a wall or column, with the blue union on top. You’ll frequently see pull downs in patriotic displays, and they can be purchased from flag dealers. They allude to the U.S. flag, of course, but they are not intended to be used as flags.”