You are at:Home»Current in Fishers»Fishers Community»Fishers resident runs for new Indiana House seat

Fishers resident Paul Nix has filed as a candidate for the District 32 Indiana House of Representatives seat, which was created after the 2020 census redistricting. 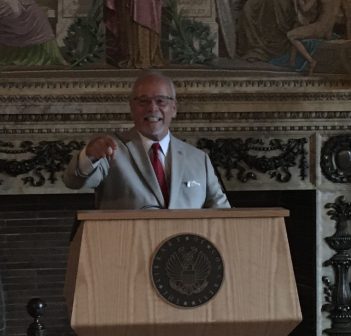 Paul Nix is a Fishers resident who has filed to run for the new District 32 Indiana House of Representatives seat. (Photo courtesy of Paul Nix)

“The fact that it is a new seat was a factor, as that means I am not running against an established incumbent and I have already lived in the district for 31 years, which meant I was eligible to run,” Nix said. “It is basically a perfect storm for a guy who wants to be involved shaping our government. I live here and have family here and plan on staying here, so I’m ready now.”

“Based on our population, we have been apportioned another seat at the table,” Nix said. “So, the entirety of Fishers will be better served, not shortchanged, in representation.”

Nix said his business and life experience are his chief qualities as a candidate.

“I have been married 47 years to my high school sweetheart, raised seven children and have 22 grandchildren and have been, and am, a business owner,” he said. “Our government needs experienced, stable, wise people involved in the process that can think short and long term at the same time.”

Nix has been in the insurance business for 44 years and is fulfilling a long-time ambition to run for office.

“I have been involved at the vice precinct committeeman for a while and find it satisfying to do something, have a role in the process, a sense of doing a duty that you feel you are supposed to do as a resident of a free society,” Nix said. “I would have done this sooner if a new seat was open or if an established incumbent was to retire. I have no desire to run against (House Speaker) Todd Huston but find that the current situation is a prime opportunity that likely will not happen again in my lifetime.”