A Zionsville teen and CEO secured a $20,000 pre-seed investment at a $1.5 million valuation, which he said made him one of the youngest Americans to accomplish the feat.

Branam said the investment made him one of the youngest venture-backed CEOs in America.

“The average age to raise venture capital would probably be 15 years older than we are,” Branam said.

Fia is an employment recruitment platform that Branam, Hamilton and Thiru hope will change how sales positions are filled.

“Essentially, what we are doing is, we are using algorithms to match active job seekers to companies that are trying to fill these sales roles,” Branam said. “We are doing that by looking at employee past experience, field job profiles and a little bit about what they are looking for in their dream job. Then we talk with the employers. We get data on their existing team.

“We get data on the sales position and what skills would be necessary, and we can autonomously match employers and employees through that system.”

With Fia, job seekers need only answer a few questions about their ideal position, and they will start receiving personalized job recommendations, according to Branam. Businesses are given a dashboard of applicants, leaving just interviews.

Branam said Fia reduces the amount of time human resource professionals need to source candidates and undercuts the market rate of a recruiter — partly by speeding up the hiring process. Hamilton said one employer generated 58 candidates and four hires within 30 days of becoming a Fia platform user. 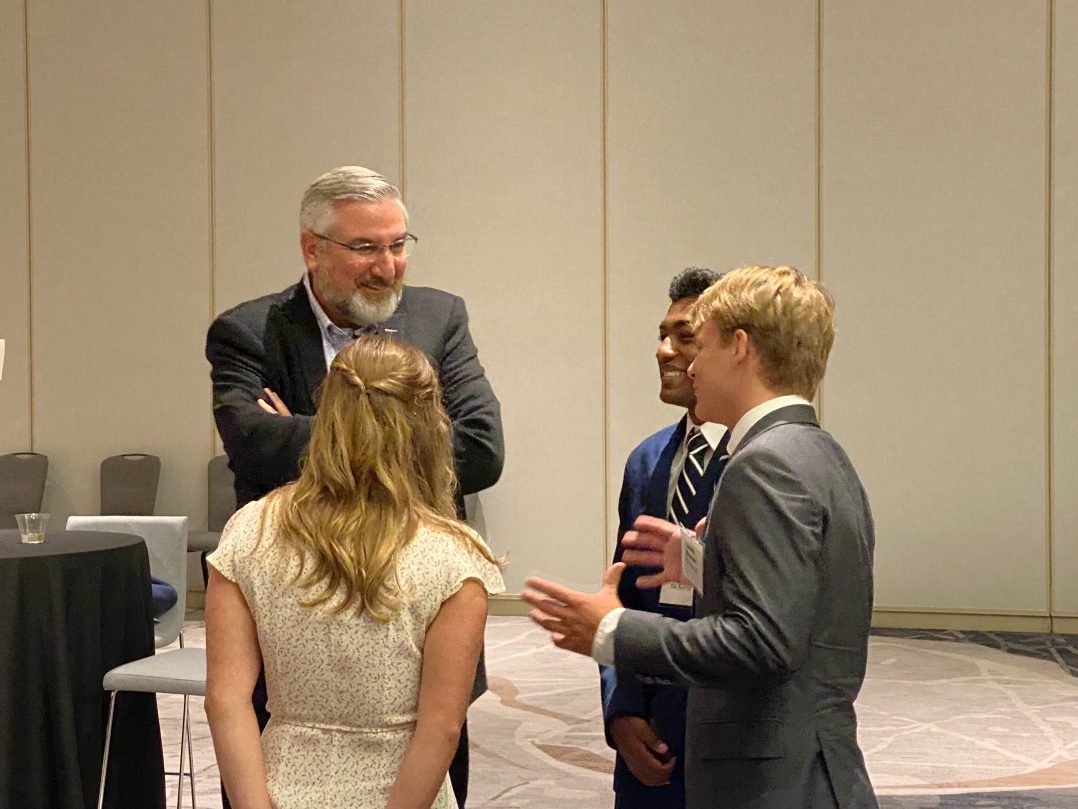 Instramental to Branam, Hamilton and Thuru’s success has been help from others.

“We’ve had great support,” Branam said. “We have built a network here in Indianapolis of some other founders, people involved in the startup space — just a lot of people along the way who have been very supportive, (shared) their insights and (mentored) us. We couldn’t have done it without them.”

One of the mentors has been STARTedUP Foundation President/CEO Don Wettrick, whose foundation runs Innovate WithIn.

“They sort of formed because they heard about Innovate WithIn, and they came together, came up with a plan and executed on it,” Wettrick said. “It’s very difficult. They are in rarified air for 17- and 18-year-olds getting venture funding. That’s very, very rare. I also think, though, that it is important that Indiana is looking toward our youth to take entrepreneurship (seriously).”

Now that Fia has continued beyond Innovate WithIn and secured venture capital, Wettrick said the company’s founders will get more help.”

“When a company doesn’t have enough money on their own, much like ‘Shark Tank’ on TV, they can have an investor or group of investors not only give them money, but provide them with advice and introductions,” Wetrick said. “Elevate Ventures is one of the biggest ventures here in Indiana, and they will work with them. They are not going to get just money. They are going to get guidance and support and introductions.”

Hamilton said the venture capital has made an impact on Fia’s founders in more ways than one.

“It has been incredible that people believe in highschoolers to take on the hiring process,” Hamilton said. “I think it’s been monumental for our business and our confidence because it’s one thing to believe in yourself, but when other people believe in you and people are willing to invest in you, not just with their time but with money, also, it has been pretty surreal.”

The future of Find Ideal Applicants, or Fia, is unknown, but, for the time being, so are the futures of the company’s three founders.

Isaiah (Izzy) Branam, Fia’s CEO, said “a best-case scenario” would be to work at Fia full time after he graduates from Zionsville Community High School, although he said he will apply to colleges to “leave doors open.”

Emma Hamilton, the company’s chief marketing officer, expects to continue working part time at Fia as a college student after graduating from Brebeuf Jesuit Preparatory School. She has not decided which university she will attend.

“Krishna, he has a lot of offers, so he will probably go to one of the colleges that have offered (admittance) to him,” Branam said. “But it’s such a crazy time in our lives. It’s hard to know how exactly it will play out.”