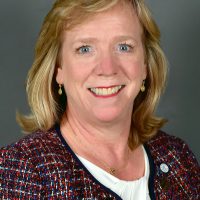 “This year we will see a lot of projects begin to come to fruition and I am excited to be in my new role as they happen,” Wiles stated. “We have a lot of major developments happening this year throughout the city and we have a lot to be proud of. I can’t wait to continue to work for the people of Noblesville and make this the best community to live, work and play in.”

Wiles is in her second term on the council. She previously was the council president in 2017. Wiles is a Noblesville High School graduate and earned her bachelor’s degree from Ball State University. She is the executive director of the Riverview Health Foundation and previously served as president of Legacy Fund for the Community Foundation for Hamilton County.

“I am excited for Megan and look forward to working collaboratively with her, and the entire common council in 2022,” Noblesville Mayor Chris Jensen stated. “Our strong working relationship will prove helpful as we prepare for a year of construction, improved connectivity and prosperity in our city.”

Council committee assignments were also determined during the reorganization meeting:

In special appointments, Ayer and Peterson were selected for the architectural review board and Wiles appointed the cultural arts district liaison.