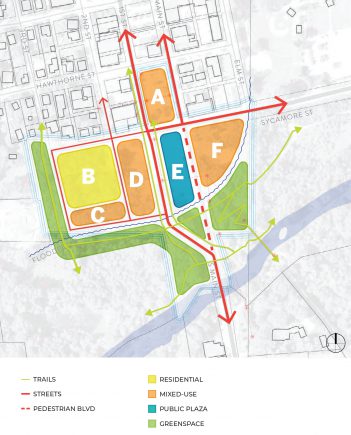 A rendering shows aspects of the design concept for the Zionsville Gateway Area. (Rendering courtesy of the Town of Zionsville)

In a 4-2 vote on Dec. 20, the Zionsville Town Council approved a resolution amending the town’s master plan to include a design concept for the Zionsville Gateway Area, a move Town Council President Josh Garrett said was needed because the market hasn’t inspired development in the area for several years.

“For me, in voting in favor of it, I certainly believe in the power of the free market, and I think the free market has spoken in the sense that that area has remained undeveloped ever since the Citgo station closed down,” Garrett said. “If the zoning that existed, if the economics of it was what the market was going to do, something was going to be built on it a long time ago. Something had to be done.”

Zionsville Mayor Emily Styron has said she envisions the proposed Zionsville Gateway Area as a reimagined entryway into town. The resolution allows for a design concept to be created based on a recent study, outlining what the town would like to see in the area toward the south end of Main Street, near the intersection with Sycamore Street. In 2020, the town gathered public feedback while conducting a ZGA study, which proposed suggestions for the area based on residents’ input. The study’s findings can be viewed at zionsvillegatewayarea.com.

Garrett said the amendment to the master plan provides a “blueprint” for developers who want to propose development in the area. However, the design concept was described as “suggestions” by multiple town officials, meaning other developments can be proposed for the area.

According to the study, major design elements in the concept include “the continuation of 1st Street south past Sycamore Street — connecting to a rerouted South Main Street bent to the west as it crosses Eagle Creek,” creating a pedestrian boulevard in the original location of South Main Street south of Sycamore Street. Also included are designs for an open public area, two- and three-story mixed-use parcels containing retail, office and residential components, a residential parcel with two-story townhomes to the west to act as a transition to the existing nearby neighborhood in addition to multiple greenspace buffers and trails.

Cara Weber of DELV Design, who was part of the consultant team for the ZGA study, said the ZGA study and development suggestion is “an incredible asset to have an authorship over what happens (in the area) as a whole, as a holistic vision.”

During the Zionsville Town Council’s Dec. 6 meeting, the council voted 4-0 to continue the matter to a future meeting, citing a desire to learn more about the project before voting. The Town of Zionsville Area Plan Commission unanimously gave a favorable recommendation that the council vote to amend the town’s master plan to include plans for the ZGA.