“I really like making friendships,” Keslin said. “I’ve become really close with several of my cast members, even though they are all adults and I’m the only kid in the show. They help me with my costumes and makeup. One of them is trying to teach me how to do my makeup. I definitely learned a lot from them.” 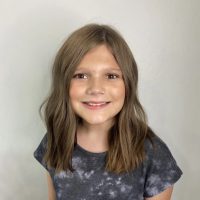 Keslin, 11, said she has quite a few lines in the musical.

“I am in four songs total. One is a solo song as the granddaughter,” she said. “One is a song where I am a random little girl on a train, and the two others are group songs that I am the granddaughter in as well. I was struggling with the first note in my solo song, but Brenna (Whitaker)  the music director helped me, and I’ve got it all figured out now.”

Keslin said she watched YouTube performances from the movie.

“My mom helped me figure out more about my character before auditions,” she said.

Keslin played Tootie in “Meet Me in St. Louis” at the Westfield Playhouse last summer.

“We were looking for their shows so I could be in another one because I really enjoyed it,” Keslin said.

“Then after my fourth-grade school musical I started doing more classes at the Booth Tarkington Civic Theatre in Carmel,” she said.

Keslin auditioned and was accepted into the Jr. Civic Theatre program. In June 2022, the Jr. Civic group is scheduled to travel to New York City where they are scheduled to attend two Broadway shows and likely be part of a workshop.

One of Keslin’s favorite roles was playing Anna in “Frozen Jr.” while in elementary school. She performed in “Singin’ in the Rain” at ZMS in May.