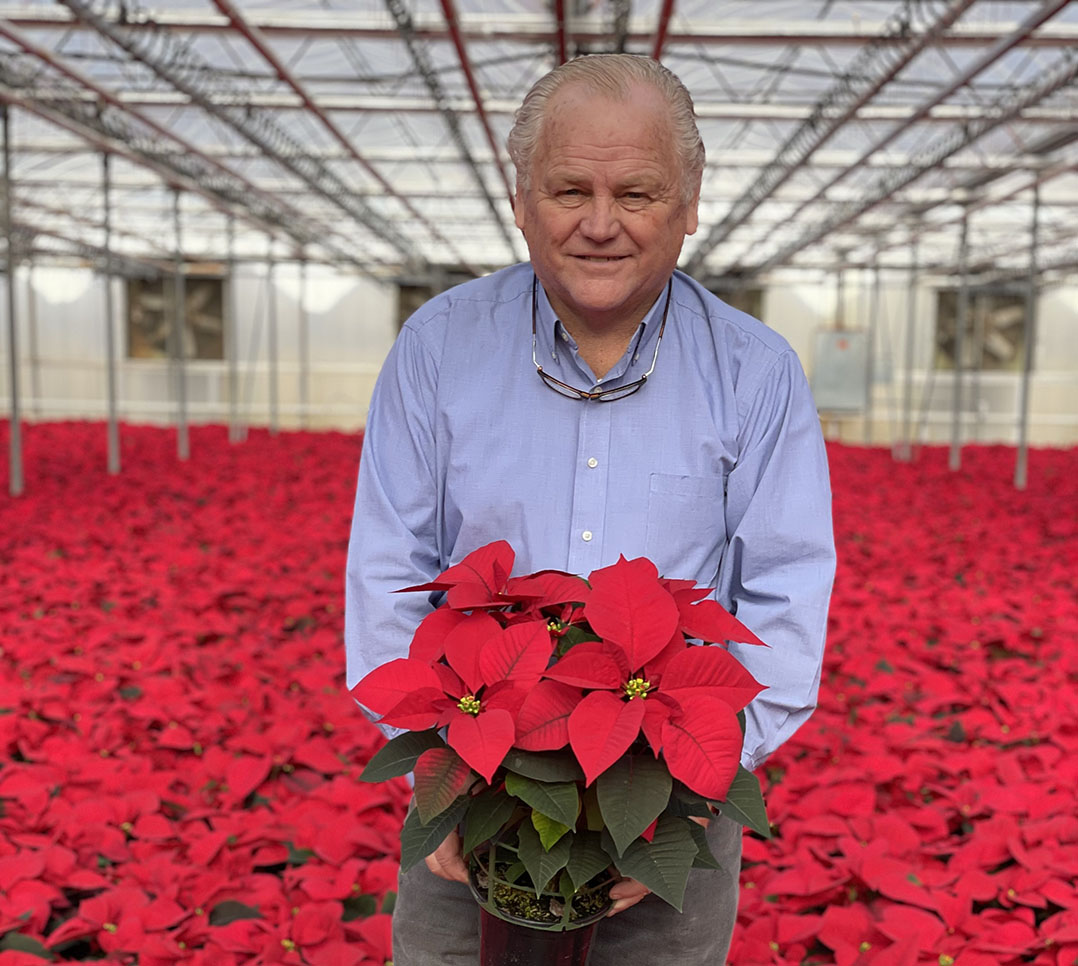 Heartland Growers President Jim Gapinski displays one of the half million poinsettias at the Westfield greenhouse and nursery. (Photos by Anna Skinner)

Inside the Heartland Growers’ greenhouse, there’s a sea of red. And a sea of pink, white and myriad other colors.

The Westfield greenhouse and nursery at 2621 E. 186th St. stocks more than a half million poinsettias for the holiday season – its busiest time of year next to spring. To make sure the poinsettias bloom in time, Heartland Growers staff manipulate daylight and temperatures to mimick shorter days, which is how the poinsettias know when to bloom.

Heartland Growers President Jim Gapinski, a devout Christian, credits the success of his business – and the poinsettias’ natural beauty – to God.

“Our family believes in Christ. We get to grow crops, and we do all we can and it’s still up to (God),” Gapinski said. “It’s all about weather. We don’t control the weather. He controls the sunny days. How a plant performs – it’s fascinating. We can change the daylight and maneuver the temperature to make the plant respond, but the Lord designed it all. It’s his design. We are just learning about it.

“To be able to grow a living plant and know that we do all we can, but we still have to let God (work), that’s the greatest joy of life – to see a creator God.”

Gapinski moved to Westfield and purchased Heartland Growers in 1984 when Westfield’s population was just more than 2,000 people. Since then, his annual sales have jumped from approximately $6 million to $25 million. Heartland Growers has sold poinsettias since Gapinski bought the business, and he said it is one of the few Hoosier greenhouses that still grows poinsettias.

“We do spring in a big way. We do garden mums in the summertime, and we do poinsettias,” Gapinski said. “We are one of the few poinsettia growers left in the state, but overall poinsettia growers are getting less and less. It’s high cost and low prices.”

Poinsettias bloom in December, making the vibrant red flower a popular gift at Christmas, but the growing process begins in July.

In the past, Heartland Growers took its own cuttings from mature plants, but labor costs are lower if cuttings are sourced from Costa Rica or Mexico.

“The world became smaller with the internet and everything else with FedEx and the USDA,” Gapinski said.

Eighty percent of Heartland Growers’ poinsettias are red, with 20 percent varying in other colors, like pink, speckled, cream and white.
Lowe’s is the greenhouse’s No. 1 customer, followed by Costco. Heartland Growers also sells to thousands of landscapers, plant shops and fundraisers. One of its customers got her start in the family business.

Angela Gapinski, Jim Gapinski’s daughter and one of nine Gapinski siblings, said she’s spent virtually every day in the Heartland Growers greenhouse since she was born.

“That’s all we did as kids, every day after school, every day in the summer,” Angela Gapinski said. “As soon as employees left for the day, it became our playground, for better or for worse.”

Angela Gapinski remembers working in the greenhouse even as a child.
“We did everything from stickering pots to hanging pots, and for many summers, we used to have poinsettia mother plants we would take our own cuttings off of,” she said. “I worked with my sister doing that for many summers.”

Angela Gapinski began working in the greenhouse full time in 2014 and ran the greenhouse program for independent purchasers, such as landscapers, garden centers, florist shops and fundraisers. She worked there for five years before launching her plant shop, Root 31, in downtown Westfield. She still sources most of her products from the family business.

“Ninety percent of the plants come from Heartland,” she said. “This time of year, the fun part is at Root 31, we bring in all the unique poinsettias. We don’t bring in red or white, we save that for Costco and Lowe’s. At Root 31, I try to carry some of the fun, unique varieties you don’t really see everywhere. Personally, our family favorites are the ones that are a little bit different. When you see that sheer amount of poinsettias growing up, you’re attracted to something off the beaten path.”

Heartland Growers stocks a half million poinsettias at its nursery in myriad colors, including red, pink and white.

Poinsettias are perennial plants in tropical areas like Mexico, meaning the plant regrows each year. In America, however, the plant is often used as an annual, meaning it is discarded when the growing season ends.

Poinsettias naturally bloom during shorter days in the tropical environment, which is why their natural blooming time is December. Heartland Growers horticulturists control daylight to prompt the plant to bloom.

“I can make a poinsettia bloom in July during the longest days of the year if I pull shade and make it dark in the middle of the day,” Heartland Growers President Jim Gapinski said. “I’ll fool it, and I’ll trick it into blooming.”

But the process is difficult for nonprofessional growers. After the plant blooms in the winter, if people keep the flower, it will revert to green in March or April.