After Mir Masoom Ali received the Sagamore of the Wabash in 2002, he was told by a colleague he was officially a Hoosier now.

Ali, 84, arrived at Ball State University in 1969 as an associate statistics professor and stayed until his 2007 retirement at age 70.

“I feel (like a Hoosier),” said Ali, who moved to Carmel in 2013. “I was very loyal. All my children went to Ball State. You don’t have to go to a big school. You still do well if you have the right motivation and right interest. I feel very proud to be part of this state.”

Ali’s daughter, Nicky Ali Jackson, was named a Sagamore of the Wabash, the highest honor given by the governor of Indiana, in August. Jackson is an associate professor of criminal justice at Purdue University Northwest.

Jackson, 58, said when her father received the Sagamore honor, it was one of the proudest moments of her life,

“Then to find we are the only father and daughter to be named Sagamores is mind-boggling,” she said. “To know we made history is so cool. My parents have been amazing role models.”

Jackson, who has her doctorate from the University of Illinois-Chicago, is the second oldest of three daughters. The oldest daughter, Nancy Ali, has a master’s degree in journalism. Another daughter, Mimi Ali Gosnell, has a Master of Business Administration degree. Ali’s son, Ishti Ali, is a cardiologist in Indianapolis.

Mir Ali’s wife, Leena Ali, has a master’s in psychology from Ball State and has worked 30 years as a mental health counselor.

Mir Ali, who has the title of George and Frances Ball distinguished professor of statistics emeritus, established the statistics program at Ball State for undergraduates and graduates. He also co-founded the Midwest Biopharmaceutical Statistics Workshop, held annually since 1978. Mir Ali also played a key role in establishing the Islamic Center of Muncie.

Mir Ali still stays in touch with many of his former students.

“My greatest satisfaction is I could do something for someone by giving them an education,” he said.

Mir Ali wasn’t used to such a rural area as Muncie when he arrived to take the Ball State job.

“But it was kismet or fate,” he said. “The state has been good to me, and the university (has been) very good to me. I think there was a reason I was brought here. I wanted Ball State to get the name and fame, at least in my area.”

Mir Ali was named an outstanding faculty member in 1993.

Education has always been important to him.

“My father was a lawyer,” Mir Ali said. “I had three brothers and we all had Ph.Ds. My oldest brother had a Ph.D. in statistics. That’s how I got into it. My three sisters are university graduates, and my eldest sister was married before attending college. My father would say, ‘Money comes and goes, but if you have an education, it does not go.’ That was how we grew up.”

A prostate cancer survivor, Mir Ali has had heart issues in recent years. He said when he was born, the life expectancy in his country was 28 years because of epidemics and childhood diseases.

“I am thankful to God,” he said. “I cannot have lived a better life. My family has been great. Coming from a small town (in Bangladesh), many people did not survive. I not only survived, I thrived.” 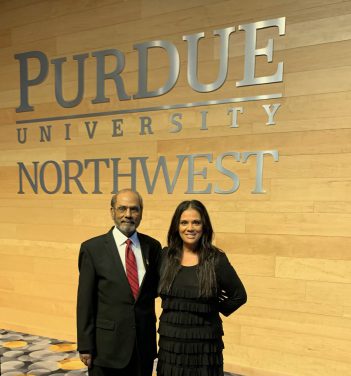 Nicky Ali Jackson is passionate about helping those who were wrongfully convicted of crimes. That likely led to her being awarded the Sagamore of the Wabash in late August, she said.

“I spearheaded this much-needed compensation bill for those wrongfully imprisoned,” said Jackson, who lives in Chesterton. “I created an advisory coalition. The owner of the Indiana Pacers (Steve Simon) is on my board, and so is a former Pacer (Eddie Gill). There are a lot of pretty incredible people on my board.”

The 2019 bill allowed for $50,000 compensation for each year of wrongful imprisonment.

The organization is called the Willie T. Donald Exoneration Advisory Coalition. It was named for a man who was exonerated after being incarcerated for 24 years for robbery and homicide. He was released in 2016, and his story prompted Jackson to take action.

“The purpose of the board is three-fold,” she said. “One is to raise awareness about wrongful conviction issues. The second purpose is to work on policy reform, just like the work I did with the bill. But that work came before I established the board. The third mission of this board is to help people that are wrongly convicted and provide resources to them when they get out. It’s all about reintegration. I recognized that people that come out of prison have assistance. They have parole officers who help them with jobs, or anything needed. If you come out of an Indiana prison and were innocent, there was zero for you. That was appalling to me.”

After emailing Barry Scheck, co-founder of the Innocence Project, about Donald’s plight, Jackson got an immediate response.

“He said, ‘We’re going to help you, and thank you for being the voice of the voiceless,’” Jackson said. “From there, my life changed. I’m proud to announce I kept every promise I made to Mr. Donald.”

Jackson said there are issues with the bill that she wants legislators to address, such as the applicant having to prove they are factually innocent.

“I’m the first to admit there are flaws, but it’s a great start,” she said.