You are at:Home»Current in Carmel»Carmel Community»Proposed rezone of former Marsh building in Merchants’ Square signals redevelopment could be on the way

It’s been nearly 10 years since urban planner Jeff Speck completed a concept plan for the redevelopment of Merchants’ Square, but beyond rotating tenants and the 2017 closing of the Marsh supermarket, little has changed in the area.

That could soon change, as City of Carmel planners are working with the new owner of the former Marsh building on redeveloping that piece of the retail center.

The Carmel City Council is set to discuss a petition to rezone the 5-acre Marsh site from B-8 Business District to the C-2/Mixed Use District at its Dec. 6 meeting. The proposed zoning would allow for business and residential uses, taller buildings and increased lot coverage, which is in line with Speck’s concept plan. 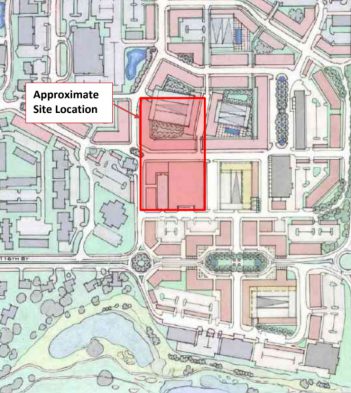 The 2012 concept plan by urban planner Jeff Speck calls for a combination of retail, office and residential uses on the site of the former Marsh building. (Image from Merchants’ Square concept plan)

The Carmel Plan Commission recommended approval of the rezone at its Nov. 16 meeting. At the meeting, Mike Hollibaugh, City of Carmel director of community services, told commissioners that redevelopment of the retail center northwest of 116th Street and Keystone Parkway has been on the city’s radar for years but that it had taken a backseat to other projects near the Monon Greenway and elsewhere in town.

Now, city planners are ready to address the site.

“The city’s proposal to rezone the property from B8 to C2 is intended to jumpstart redevelopment in Merchants’ Square,” Hollibaugh said. “We feel there is growing momentum and interest in this area. While we don’t have plans for this site today, we do think that any redevelopment would be respectful of the concepts in the plan that was produced through the entire Merchants’ Square area back in 2012.”

The concept plan anticipated that Marsh would replace its building with a smaller one in its existing parking lot and incorporate parking underground or on its roof. It proposed two office or residential buildings east of the smaller supermarket facing AAA Way. To replace the existing Marsh building, the plan recommended mixed-use buildings, including offices and rowhouses that would surround parking garages.

The proposed rezone only applies to the 87,000-square-foot former Marsh building — currently serving as the temporary home of the Carmel Clay Public Library — and its parking lot, which was purchased by Indianapolis-based New City Development in late 2020. Current has reached out to New City Development for comment.

Carmel Mayor Jim Brainard said discussions with New City Development have confirmed that its vision for the site aligns with the city’s.

“The company has proposed doing exactly what we called for in the plan,” Brainard said.

He hopes that improvements at the former Marsh site will spur additional redevelopment of the area.

“Most of the stores (in Merchants’ Square) are leased, but it could be a much more exciting, vibrant area than it is today,” Brainard said.