Don’t remember Walker? A linebacker out of Southeast Missouri State, he played three seasons for the Colts in the early 1990s, appearing in 43 games and starting one in 1992, the last year of his career. 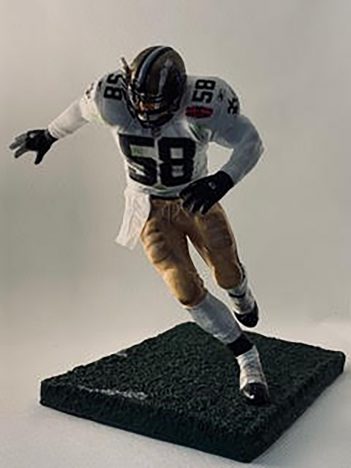 Walker, however, now has his own figurine and is directly responsible for delivering a new hobby to his friend, Westfield resident and Carmel Clay Schools elementary school teacher and bus driver Mike Bostic.

“They only made star players back in the day, so somebody else like a Tony Walker couldn’t get their own figure,” Bostic said. “That’s where guys like me come into play. We can create and make any player.”

Bostic had been detailing small football figures (1 1/2-inches tall) since 2016, but Walker told him in a phone conversation at the start of 2021 that there was a big demand for the larger, custom figures. A new avocation was born.

Bostic, 49, puts about five hours into manufacturing his 6-inch figurines to custom specifications. The first step is on the stove, where the glue of an existing figurine comes off in the boiling process. This allows him to customize an entire new player. He charges approximately $100 for a figure.

Bostic also recently created a figurine for ex-NFL linebacker Scott Shanle. Although he enjoyed a more distinguished career than Walker, he is hardly a household name. Shanle played in the league from 2003 to 2012 and was a mainstay of the New Orleans Saints defense that beat the Colts 31-17 in the Super Bowl.

Shanle’s wife is part of an NFL Wives Facebook Group and saw a post featuring Bostic’s work. She contacted Bostic and ordered a figurine of her husband. Bostic took an old Ray Lewis figure, started boiling off parts, and a few hours later a Saints Shanle figurine was finished, complete with the Super Bowl patch he wore for the big game, the towel strapped to his uniform pants (a kleenex dipped in water and added to a glue mix) and the Nike swoosh on his cleats.

Bostic was thrilled with the result.

“It’s fun to put the time into it and see it come together from the beginning to end,” he says. “It’s really satisfying. Nothing’s perfect, but to get it to a point from where it was (former Baltimore Ravens linebacker) Ray Lewis to another player, it’s a pretty cool process. It’s a lot of fun and rewarding. It’s relaxing. As a school bus driver and teacher, there is a lot of stress. When I come down and work on these, all the stress goes away.”

Manning got his small figurine via personal delivery from Bostic on the course at Crooked Stick Golf Club in the summer of 2020. Reggie Wayne also received the personal touch when Bostic was invited by the Colts to be part of a fan group positioned close to the stage at the NFL Draft in Nashville when Wayne was part of the show.

Not every figure is famous. Bostic recently customized some Brownsburg Little League players.

“You can do pretty much anything you want with it,” he said. “The possibilities are endless.”