Editor’s note: The original version of this story stated an incorrect web address for the Great American Songbook Foundation. The web address is TheSongbook.org. 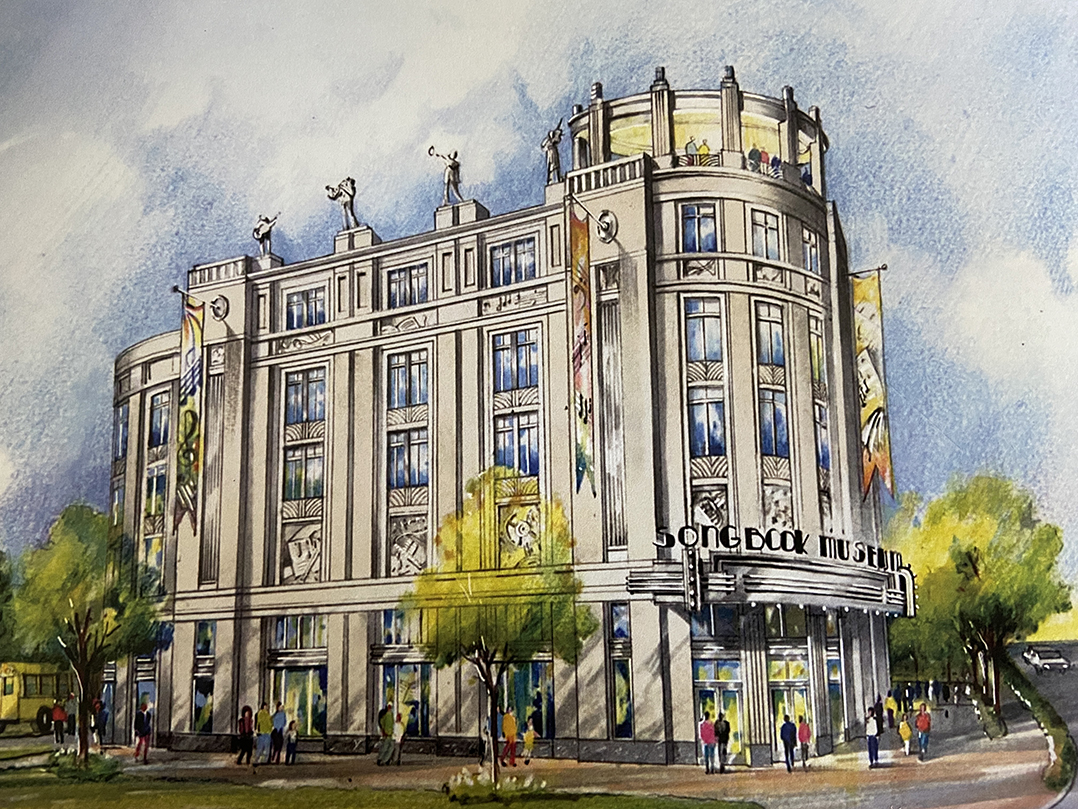 Carmel Mayor Jim Brainard used this drawing to show the possible scope of the planned Great American Songbook Museum on the northeast corner of City Center Drive and 3rd Ave. SW. Songbook officials, who will determine the aesthetics and other elements of the building, said the drawing was made without their input and that the museum is likely to look quite different. (Drawing courtesy of the City of Carmel)

Cleveland is home to the Rock & Roll Hall of Fame, Nashville, Tenn., boasts the Country Music Hall of Fame, and Carmel Mayor Jim Brainard hopes his city will soon be famous for being the home of a museum highlighting the Great American Songbook.

The City of Carmel, through the Carmel Redevelopment Commission, is eyeing two parcels for the museum on 3.7 acres on the northeast corner of City Center Drive and 3rd Ave. SW — just north of the Palladium — that are home to Salon01 and an industrial building that houses Laser Flash and Magnetic Concepts.

Brainard said the CRC will soon discuss spending $4.8 million to purchase the industrial building, which appraised for $5 million. He said the city is still in negotiations regarding the Salon01 building, but he expects an agreement to be reached soon.

The city expects to use funds from bonds approved in May for land acquisition to purchase the parcels. When that happens, the city’s involvement in the project will be substantially complete.

The Songbook foundation will oversee design and construction, primarily with private funding from a national capital campaign, and will own and operate the museum. The process will be undertaken in consultation with the Los Angeles-based Grammy Museum and other national experts, and the new museum will become one of the Grammy Museum’s cultural affiliates, alongside institutions that include the National Blues Museum in St. Louis and The Beatles Story in the United Kingdom.

Chris Lewis, executive director of the Great American Songbook Foundation, said the project team is in the early stages of planning the museum, and that its size, look, cost and other details are still to be determined. It’s too early to predict when construction might begin or when the museum would open, he said, but the process is likely to take several years.

“It’ll take time,” Lewis said. “While we’ve always dreamed about a museum, we haven’t really sat down to determine the vision.”

Lewis said an architectural drawing used by Brainard to show the museum’s possible scope is not a final — or even initial — design for the building.

“This drawing does not reflect any input from the Songbook Foundation, and it’s unlikely the building will look anything like this,” Lewis said. “We have months of discussion and research ahead before we can even commission a rendering that represents our plans for the design.”

Brainard said he expects the design to change but believes it’s important that the museum complement the Palladium and the rest of the Center for the Performing Arts.

“This building, we hope, will sit right across the street and be part of that complex, so it’s critical that the architecture for this building is beautiful,” said Brainard, who expects the museum to draw thousands of visitors per day during its busiest times.

Carmel has been home to the Great American Songbook Foundation for more than a decade. Founded in Los Angeles in 2007, the foundation is committed to preserving the history of American Standards produced from the 1920s to the 1960s, and it’s long had a goal of establishing a museum to fulfill that mission. The foundation is currently housed at the Palladium, where it has dedicated exhibit space. It previously kept its archives there but moved them several years ago because of space constraints.

Although the museum will focus on the Songbook era, it also will aim to educate visitors on how those songs influenced modern musicians.

“The museum itself is going to be an interactive, dynamic place where people can come and celebrate American music, whatever their personal songbook is,” Lewis said. “Maybe they are a Frank Sinatra fan, or a Bruce Springsteen fan, or a Lizzo fan.”

Lewis said the foundation received high marks on the first two of five preparedness assessments through the American Alliance of Museums, designed for organizations seeking to open a museum, and plans to begin the next phase in early 2022.

Learn more, including how to donate to the foundation, at TheSongbook.org.