Westfield Washington Public Library will host author Jeff Morris from 6 to 7 p.m. Nov. 30. A former infantry officer in the U.S. Army, he penned the memoir “Legion Rising – Surviving Combat and the Scars it Left Behind.” 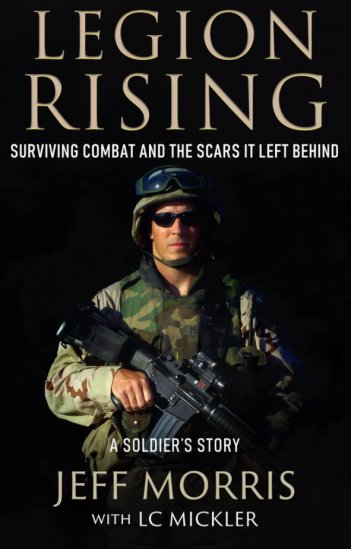 A Westfield resident, Morris did tours of duty in Baghdad, Iraq, from May 2004 to March 2005 and from October 2006 to January 2008 as a platoon leader and company commander. Although the book is about his experiences, it also is about healing and life after the military.

Morris was initially reluctant to write the book.

“For many years people approached me about doing it and I was completely against it.,” he said. “As time went on, I was able to come to grips with the things I had been through and was able to overcome personally. I had also started my memorial CrossFit event to honor the eight men lost under my command in July 2012. As it grew in popularity around the country, I started to see the impact of sharing my story and the stories of the men I lost were having on others, both veterans and non-veterans.

“With all that said, I always say it was never really ‘my’ idea to write the book, it was countless people telling me to do it because the message needed to be shared with a broader audience.”

The book follows Morris through fast-paced accounts of the thrills and dangers of combat and the tragic loss of eight men in the line of duty. An excerpt from the book reads:

“Not everyone has pulled shards of another man’s skull from the palm of their hand. Not everyone has stood over the bodies of friends whose lives were lost in an instant. Not everyone has struggled to face their own reflection for years on end. But anyone who has experienced trauma or adversity will resonate with Legion Rising, the unflinchingly honest account of an army officer’s journey through combat in the Iraq War and rising beyond the scars that trauma leaves behind.”

Morris said readers appreciate when they see others be completely honest and vulnerable.

“Almost like it gives them permission to do the same. One thing I was adamant about was if I was going to write a book, it was going to be real and raw,” he said. “Not sugarcoat things, and let people see the dark side of what trauma can do. It wasn’t for shock value or anything of that nature, it was to show the audience that it is possible to take something bad and turn it into something good.”

Morris recently stopped by the library to donate a copy of the book. A conversation with staff led to the idea of an author visit.

“We feel that Jeff’s book will help bring awareness of the importance of caring for your mental health, not only with service members but also with anyone who has faced adversity,” said Brittany Super, WWPL Information/Reference and Teen Services manager. “Many people could benefit from hearing his story of healing and hope.”

The event, which will be held in the Community Room, is free of charge to the public. Pre-registration is not required.