By Anna Skinner and Rachel Greenberg

When inmate Jennifer Bellah leaves the Hamilton County Jail, she has a detailed business plan to follow to create her own baking business. She will soon be a graduate of the new Launch HOPE Foundation, which equips female inmates with skills such as sewing or entrepreneurship to prepare them for life outside of jail so they’re less likely to return behind bars.

The Launch HOPE Foundation started in the Hamilton County Jail earlier this year. It is only available to female inmates. The program is led by Butler professor Kristi Mitchell, who teaches the women entrepreneurial skills. A portion of the program teaches women tangible skills, like sewing.

Bellah, who is serving time for theft, is grateful for the Launch HOPE Foundation experience. She said with a history of theft, it’s hard to get a good job, but now she plans to be self-employed.

“It’s like a merry-go-round,” she said. “I don’t want to steal. I don’t want to use drugs. But I can’t wait three weeks to get a paycheck because I was living in a hotel. I have to go out and do this (steal). You’ve never had a hand to get off (the merry-go-round), and now I have that hand to get off. That’s what they do. God put me here for a reason because I was not going to be stopped on my own.”

Bellah previously worked for Cake Bake in Broad Ripple and is skilled in cake decorating. As she went through her business creation plan with the Launch HOPE Foundation, she wanted to start a wedding cake and cupcake business but realized she needed more name recognition in that industry before launching that dream.

“I’m still doing cupcakes and cakes, but to get started, I’ll be doing business-to-business. To start as a decorator, you have to have a (well-known) name,” Bellah said. “So, to establish myself for the first few years, I’ll be doing cupcakes, cookies, gourmet English muffins and scones for businesses, so I won’t have a storefront.”

Bellah’s baked goods will be sold at other businesses, offices, coffee shops, cafeterias and hospitals.

Bellah is scheduled to be released by Dec. 28 or earlier, and she’s eager to get started. She said her dream feels real.

“I have always thought about doing a business on my own, but I didn’t know how to get there,” Bellah said. “I had no idea. I never would’ve had the confidence to do it, either. So now, I literally have a whole business plan set up. All we are waiting for is me to get out. It feels wonderful.

“(Mitchell) has taught us a lot how to get from Point A to Point B.”

Mitchell, an Indianapolis resident, teaches a business accelerator program to the women while they’re in jail and after their release.

“I vet business concepts, and when they get released, they have the option to go into the business accelerator where they bring their company to market,” Mitchell said.

Mitchell said much of the course has to do with changing the inmates’ mindsets.

“When we are inside the jail facilities, we do a lot of work with the entrepreneurial growth mindsets,” Mitchell said. “Just having the mindset of a growth mindset helps when they get out. If you change the way you think, the things you think about change. It’s a key factor in terms of, ‘I can do this. I don’t have to do whatever I was doing before.’ It gives them hope that there’s more than just a menial job for them.”

Nine women are enrolled in the program in the Hamilton County Jail. An additional 10 women are on a waitlist. 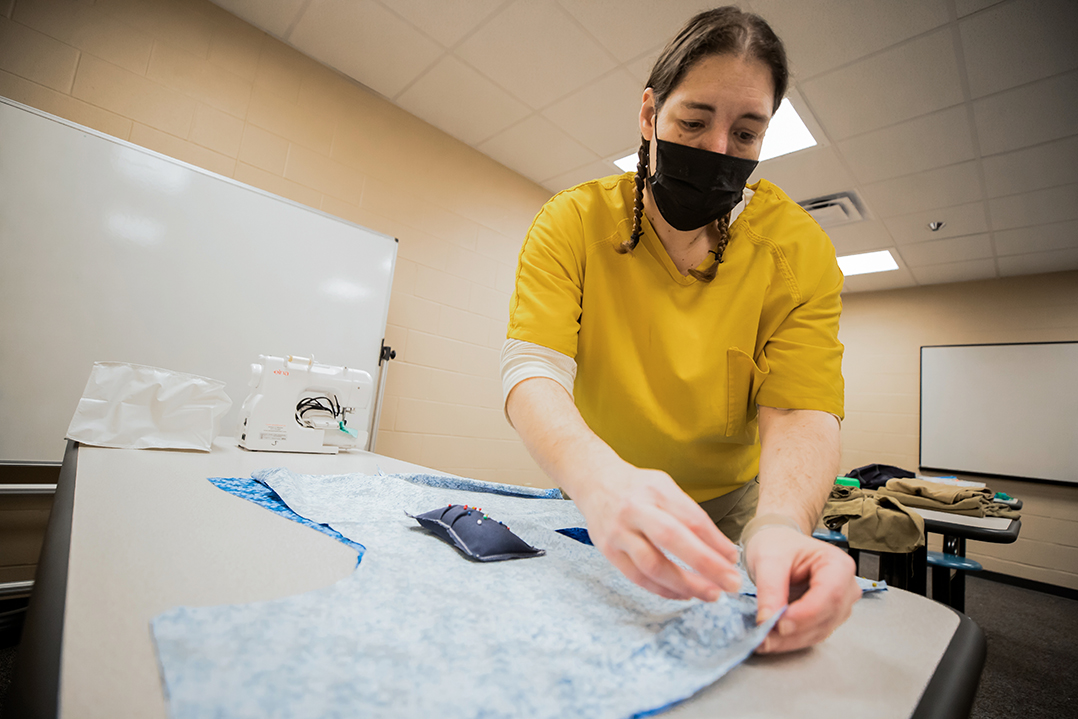 Hamilton County Sheriff Dennis Quakenbush said the Launch HOPE Foundation’s goal is to show female inmates that the county is invested in their success.

“We are trying to invest in them and hopefully give them a skill to help them be more confident in themselves and successful when they leave here,” Quakenbush said.

Although most inmates at the Hamilton County Jail are incarcerated an average of 60 days, Quakenbush said it’s still important to teach them entrepreneurial skills.

“Obviously, they’ve hit a low point and we are trying to intervene so they don’t come back,” Quakenbush said. “How do we help them be more successful and more productive in society? That’s really what we’re focused on.”