You are at:Home»Current in Carmel»Carmel Community»Wednesday Literary Club of Carmel celebrates 125th anniversary 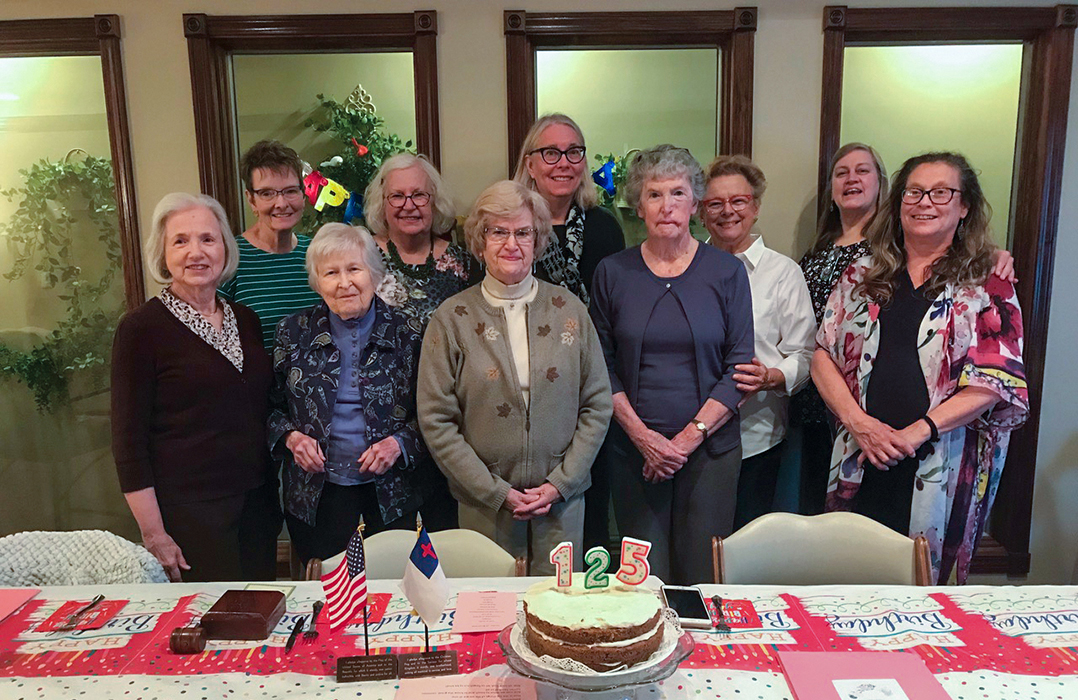 The Wednesday Literary Club of Carmel pauses in front of a cake celebrating the group’s 125th anniversary. (Photo by Mark Ambrogi)

The Wednesday Literary Club of Carmel has survived societal changes to meet monthly since 1896.

The women’s group celebrated its 125th anniversary with cake at the Nov. 17 gathering.

The group was started to promote the love of literature among its members. The Literary Club was a major force in establishing the Carmel Public Library, which started with a small book collection. In recent years, the group has met at the Bussell Family Funerals building in Westfield, just north of the Carmel border.

Carmel resident Carolyn Woodling, 86, who has been a member since 1974, said a person always brings a topic or a book to discuss.

“It’s not like a book club,” Woodling said. “We might talk about a book or a travel program. We do have speakers in, but it’s usually the members making the presentation. It’s been pretty consistent that it’s a worthwhile program.”

Carmel resident Laura Rutherford, 85, said the membership was once capped at 25 because that was the most any house could fit, but that’s not been an issue in recent years.

Woodling said it used to be prestigious to be invited.

Brenda DeCoursey joined in the mid-1980s when she lived in Carmel and moved away 22 years ago to a home near Bloomington. Two years ago, she moved to Zionsville.

“I didn’t want to leave the group when I moved, so I remained an associate all those years,” DeCoursey said. “In the early 2000s, the group would come to my house once a year.”

Sally McBrane, the club’s vice president, said when a member dies, the club donates a book in the member’s name to the Carmel Clay Public Library.

The group collects dues but there aren’t a lot of expenses, so the money usually goes to charity or to buy books.

“We usually try to do an outreach at Christmastime to give money to the fire department’s drive or something like that,” DeCoursey said.