Chandler “Tron” Estep has always had deep respect for the military, and when he decided to enlist in the Army National Guard, he set a goal to achieve a perfect score on the Army Combat Fitness Test before he even left for basic training.

He didn’t realize how difficult the objective would be until after he reached it.

Estep took the test three times and scored highly each time. Out of 600 points possible, Estep scored a 588 on his first test and a 592 on his second. He scored a perfect 600 on his third, an achievement his drill sergeant hadn’t seen before. Estep took the third test just prior to graduating from basic training at Fort Jackson, South Carolina, in October.

“My drill sergeant said (my perfect score) is the first one he’s ever seen,” Estep said.

There are six events in the Army Combat Fitness Test – deadlift, standing power throw, pushups, a sprint-drag-carry, leg tucks and a timed 2-mile run. To receive a perfect score, a soldier must pull 340 pounds for three reps on the deadlift, throw a 10-pound ball 12.5 meters or further, complete 60 or more pushups in two minutes, complete the sprint-carry-drag, which includes pulling a 90-pound sled and side-shuffling with two 40-pound kettlebells, in 1 minute and 33 seconds or less, complete 20 leg tucks and run 2 miles in 13 minutes and 30 seconds or less.

Estep struggled the most with the standing power throw and the sprint-drag-carry.

“Your legs are on fire. They feel like jelly when you’re done with it,” Estep said.

After he scored less than perfect on his first two tests, Estep practiced his technique for the standing power throw until he perfected it. He threw it exactly 12.5 meters, which was the requirement for the perfect score. 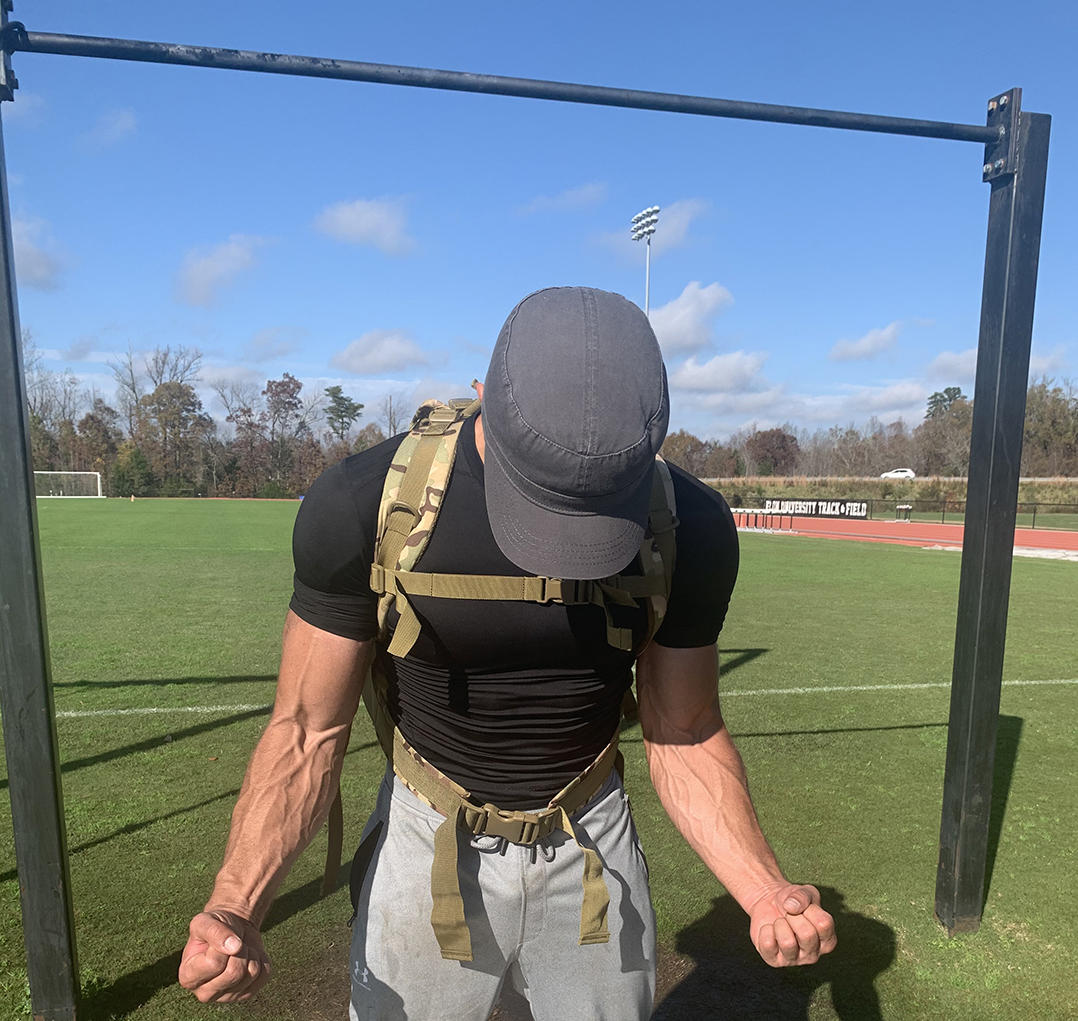 “It was my goal (to get a perfect score),” said Estep, the son of Chris and Sue Estep, who own Roundtripper Sports Academy in Westfield. “I work at Roundtripper, so I’m a personal trainer and I train kids, mostly baseball players. I played football in college and everything, so I thought when I go into basic training, I want to go in the best shape I can be. The better shape I’m in, the easier it will be.”

Sue Estep said she her son better understood the commitment needed to reach his goal because at 25, he was older than most other soldiers entering the Army National Guard.

“He understood the situation and what would be happening at basic training, and so he was preparing himself both mentally and physically for that,” Sue said. “He knew that (receiving a perfect score) was a big goal, but I don’t think he realized how big of a goal it was until he got to basic training.”

Sue Estep said her son kept a journal during basic training and journaled every day. When a journal was filled, he mailed it home for his parents to read.

“We could see what he was thinking and feeling each day,” Sue Estep said. “He had expressed to his drill sergeant his goal was to score a perfect score, and they said they’d help in any way, but that they’d never seen it done. We were obviously really proud of him when he had written and told us his scores, but we didn’t realize what a big deal it was until we got there and the number of people that came up to us wanting to shake our hand and meet us and express to us what a big deal it was to see him do that and score that perfect score.

“I think (what) made us most proud of all was to know he took on a leadership role with a lot of the younger men and women in his platoon that maybe weren’t as well prepared when they got there.”

Estep said having a perfect score on the ACFT helps with promotion and job placement.

“I’m a brand-new soldier, so there’s still a long way to go before worrying about that,” said Estep, who is attending a 12-week officer candidate school in Fort Benning, Ga. “It shows you are physically fit and you take care of yourself.” 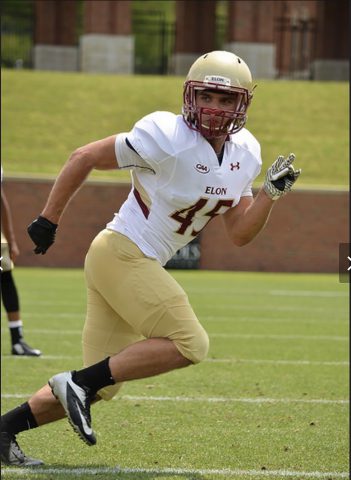 When Estep completes officer candidate school, he plans to attend further training to become a field artillery officer. Estep said as a child, he wanted to be a professional football or baseball player but always had respect for the military.

Estep attended the University of Elon in Elon, N.C., and majored in marketing and economics. He played football there as well. He was a strong safety. Estep also received his master’s degree in business analytic at Elon. Prior to college, Estep grew up in Carmel and attended Cathedral High School. The 25-year-old graduated from the National Guard’s basic training in October. 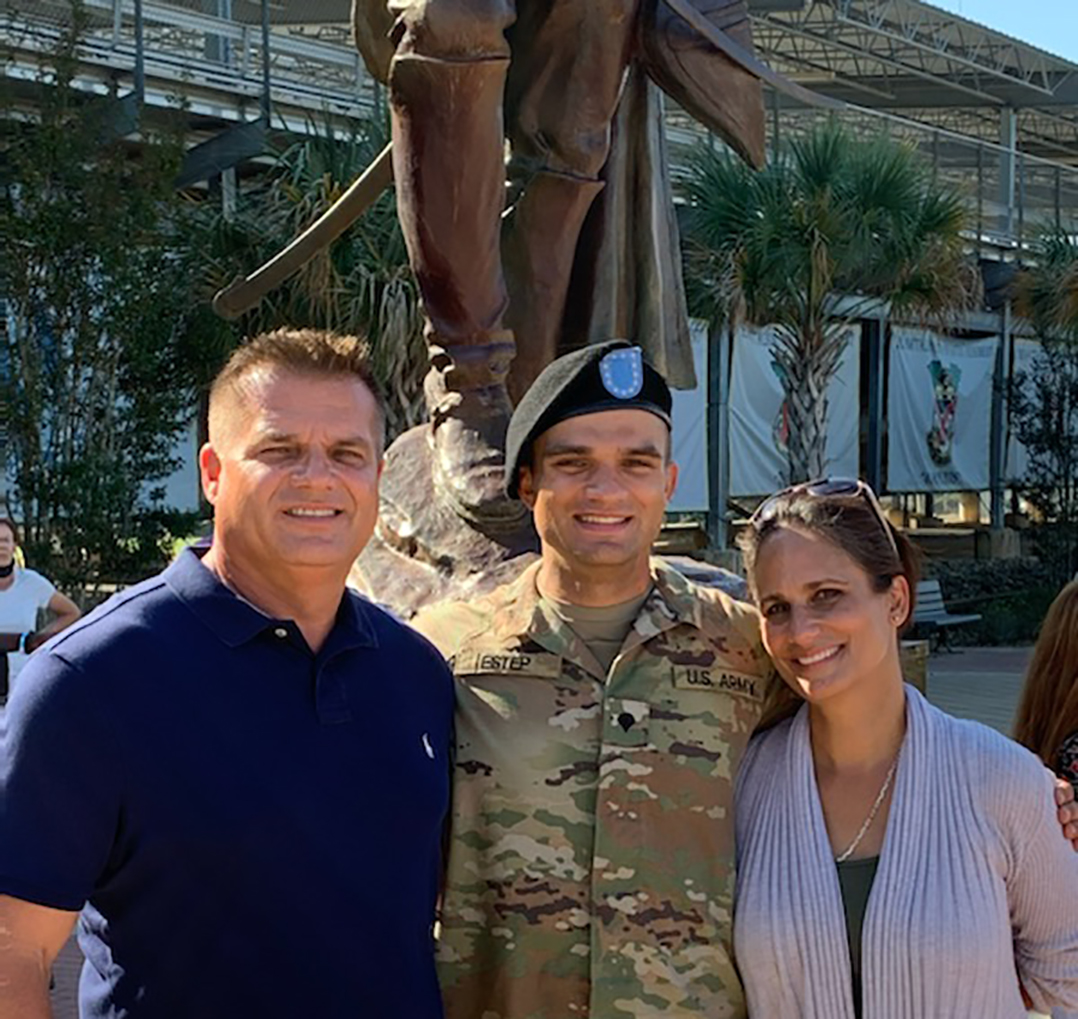 Chandler “Tron” Estep, center, is pauses with his parents, Chris and Sue Estep, after he completed basic training in October.

Besides being a personal trainer and working in the strength and conditioning side of the business, Estep also trained for basic training.

Estep’s mother, Sue Estep said her son ran the Monon Trail every day for a time wearing a 40-pound vest.

“He’s a very self-motivated person, so he set his standard and was working towards that, understanding what he would be facing when he got to basic and knowing that at basic training you’re going to be sleep deprived and sometimes hungry,” Sue Estep said.