You are at:Home»Current in Westfield»Westfield Cover Stories»There’s an app for that: Westfield High School grad, teacher create solution for software scheduling issues

What began as a problem-solving effort with a student and a teacher has now led to a schoolwide solution for scheduling problems during student flex time.

Bruns and Watson wanted to create something that wasn’t already covered by the school’s learning management system and its grading and attendance website.

“We had a list of things we thought we could help with, and No. 1 was flex time, called CORE,” Bruns said. “Students are able to sign up for different things between fourth and fifth period. It’s 35 minutes. Clubs meet during that time on Fridays, or there are enrichment activities.

“All students are able to participate in that every day.”

WHS Assistant Principal Bill Naas was in charge of organizing CORE times for students, so Bruns and Watson approached him first with their idea.

“(Naas) wanted a replacement for the software we were using for CORE, and that’s where our project took a real sharp turn to focus on that,” Bruns said. “It was priority No. 1.”

“It has (the student’s) scheduling on the side (of the website), so they can see a big list of all the things they can sign up for,” Watson said.

SchoolCore isn’t mobile, but Watson and Bruns are working to make it a mobile app.

So far, feedback on the app has been positive – especially after a few initial bugs and traffic issues were fixed.
“After all that was sorted out the first week, there haven’t been any issues,” Watson said. “As of right now, things are working pretty much flawlessly on the student end.”

Watson said even when the website had glitches, it worked better than Enriching Students, which made the scheduling process complicated and slow.

“It worked, but it was a little slow and kind of hard to navigate around and find what you wanted to use or see,” Watson said.

Watson said his goal is to offer SchoolCore at three other high schools by next year. He wants to start at Zionsville or Fishers, then scale to larger high schools like Carmel or Center Grove. The creators said the app could eventually be profitable.

WHS was using the product for free during the beta-testing period, but has since agreed to pay an annual fee to continue using the app. Schools will pay between $6,000 and $15,000 annually depending on which modules the school plans to use.

Bruns said in the short term, he and Watson want to offer other modules through the website, such as a virtual hall pass system, an event scheduler, a community announcement board and a service-hours tracking system. Only students and staff can access SchoolCore, but if an events management module is added, there may be a portal added for nonstudents to access events.

Watson is majoring in computer science with a specialization in software development at Indiana University. SchoolCore wasn’t the first time he and Bruns worked on a project together. They teamed more than four years ago, when Watson was a WHS freshman in the computer science club.

“In the past, we have done some cool stuff,” Bruns said. “We made a button to put on this student’s wheelchair because he got locked out outside and his arms couldn’t reach the button to call (the front desk). Luckily, someone noticed, so we built a button to push it to alert people to let (that student) in.”

Watson and Bruns met at the beginning of 2020 to lay the groundwork for their app.

“We wanted to do something that had more impact on the building,” Bruns said. 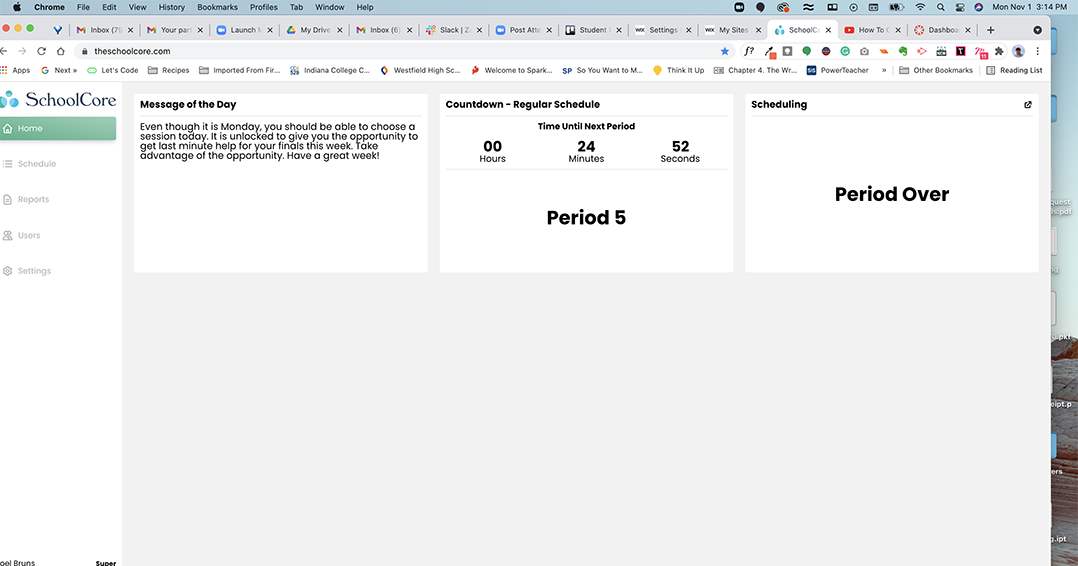 The SchoolCore app is a scheduling platform for students to plan their CORE scheduling at WHS. (Screenshot by Joel Bruns)

Westfield High School graduate Zach Watson and Joel Bruns have launched a GoFundMe account to cover expenses for creating the app. There are roughly $500 in monthly expenses.

“There are inevitable costs involved in this, and sometimes somewhat surprising costs that come with it,” Bruns said. “We want to have a little bit of runway ahead of us, so that when those kinds of costs happen, we have a cushion, and my credit card doesn’t start to scream.”

Watson and Bruns want to raise $10,000 for their project.