“The group found out via social media that we had won national recognition for our Dance Marathon,” said Ontiveros, who is co-club sponsor with Caitlin Crecelius. “We work hard each and every year, but (2021) felt completely different and brand new as we were navigating a global pandemic. Everything from fundraising, social gatherings, morale and committee size were different. I am so proud that with our smaller than ever executive board of three that we were able to make such an impact.

“Prior to receiving this award, I can honestly say that Caitlin and myself did not know that this was something that the foundation did.”

The club has raised more than $600,000 for Riley Hospital for Children since the first marathon in 2008.

Award recipients are selected each year based on a combination of fundraising success, year-round programming and event execution.

“Fishers was an excellent candidate as they demonstrated success in each of these areas,” said Kaity Lynch, Central Region Cause Partnerships manager for Children’s Miracle Network Hospitals. “In their award application, they shared their focus on adjusting key event traditions to be more inclusive, that they safely hosted an event that abided by all local, state and CDC guidelines, all while showing a commitment to fundraising by raising over $21,000 in the two weeks prior to their marathon after having fundraising restrictions lifted.

“This was a 252 percent increase over that time frame compared to the previous year.”

The Hamilton Southeastern Schools Board of Trustees recognized the honor Oct. 26.

Ontiveros, in her 10th year teaching in the art department at Fishers High School, has been involved in some capacity with the Dance Marathon. In the last three to four years, she has taken on the lead role of club co-sponsor. Chrissie Sturgill and Abbey Horst have been previous co-sponsors. Caitlin Crecelius is in her second year as co-sponsor.

Crecelius is a teacher in the exceptional learners’ department.

“We were able to be so successful with an online marathon because of the passion and drive that these kids have for Riley Children’s Hospital,” Ontiveros said. “The Fishers Dance Marathon has become an integral part to the cultural here at FHS. Due to the lack of in-person fundraising and events, it was fairly slow and steady until the executive members decided to propose the idea of an in-person marathon.

“Once approved by the administration and the Fishers Health Dept., we were in business to start planning an in-person marathon. The two weeks leading up to the marathon we raised $21,775, topping our 2020 total when we were strictly all virtual.”

“Our student leaders wanted to be able to find a way to get as many students involved as possible while being inclusive, despite the barriers the 2020-2021 school year presented,” Crecelius said. “One way the student leaders found to do that was changing our previously know Mr. DM (Dance Marathon) competition to DM Royalty. Changing the name and structure of the competition allowed all our students a chance to participate.”

The 2022 FHS Dance Marathon is scheduled for March 25. Crecelius said the goals for the future include enhancing the connections with the Fishers community, expanding involvement across all clubs/sports at FHS and continuing to raise money for Riley Hospital for Children. 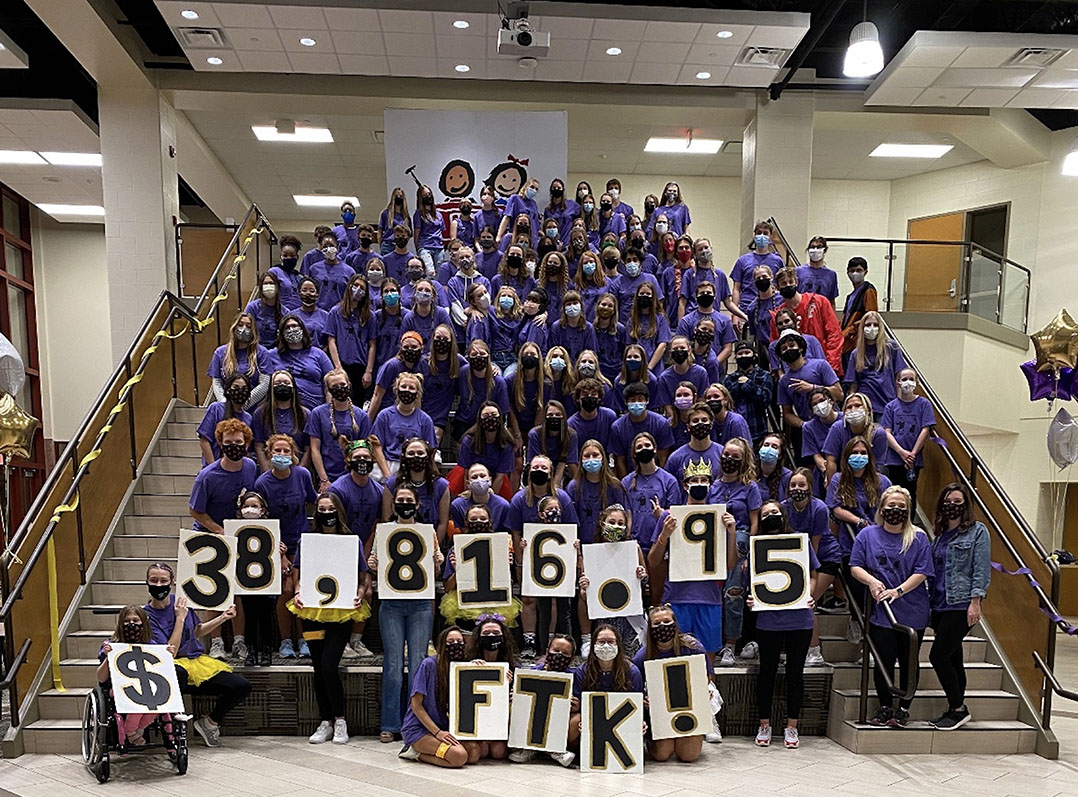 “The club is truly student run,” Ontiveros said. “Although there is a lot of guidance and behind-the-scenes work from the sponsors, this club would not be what it is without the students’ leadership. There are several events throughout the year where many other clubs and sports teams contribute their time and energy to help the overall good of the club. Fishers Dance Marathon is the heart of FHS. I truly believe it gives students a purpose bigger than their own.

“It teaches philanthropic values, and it instills hope and awareness to finding a cure for cancer.”

“We worked together to plan all the events leading up to the marathon, the event itself, and fundraising efforts throughout the entire year,” Koley said. “I was super excited to hear we received the national award, and it was amazing recognition because our program has grown so much and we managed to raise a good amount of money and hold an event even with COVID-19. Dance Marathon was truly life changing for me at Fishers.

“It inspired my career aspiration, and I am now involved in Muskiethon at Xavier University that raises money for Cincinnati Children’s Hospital.”

Koley’s sister, Alaina, is a FHS junior and is on the Dance Marathon executive board this school year.