You are at:Home»Current in Noblesville»Noblesville Cover Stories»Getting their goat?: Zoning issues cause Happy Goat Lucky Yoga owners to look elsewhere to operate their business 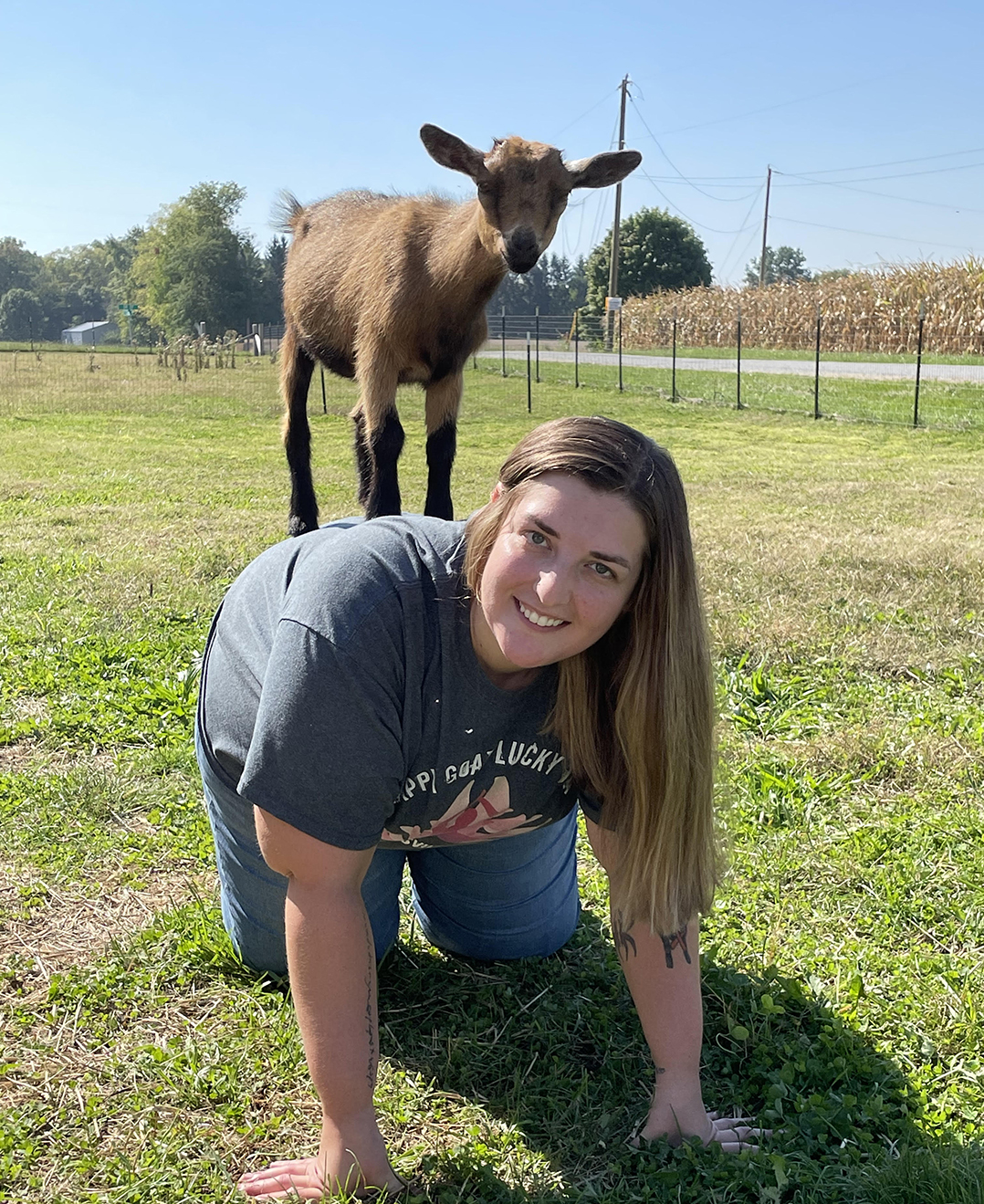 Jordan Stevens does yoga at her property with one of her goats. (Photos by Anna Skinner)

Many business owners felt that the COVID-19 pandemic shutdowns might be the worst of their issues, but challenges seem to keep coming for Jordan Stevens and her business, Happy Goat Lucky Yoga.

But because of car troubles, the difficulty that comes with hauling six to eight goats across town and a diagnosis of multiple sclerosis for Stevens, she and her partner, Lynsay Riddle, decided to offer the yoga classes at their 11-acre-plus home in northeastern Noblesville near Ind. 37 and Cornell Road.

The home-based classes began in June.

“We had a pretty good summer, but right around the middle of August, we got a notice (from Hamilton County) that we weren’t allowed to have classes out here and we needed to stop,” Stevens said.

The notice instructed Stevens to apply for a variance to allow for business to be conducted on the residential property. The White River Township comprehensive plan does allow for agribusiness in the area, so Stevens and her family tried to convince the Hamilton County Board of Zoning Appeals-North District that their business is indeed an agricultural one.

“The Indiana General Assembly’s definition of agritourism is any activity on a farm where people come to interact with animals and learn about them,” Stevens said. “We teach people while they’re doing yoga about the goats. So, (the BZA) agreed it was an agribusiness, and the White River Township comprehensive plan does advocate for agribusinesses, so it fits into the plan, but basically they don’t know how to regulate us.”

The BZA voted 4-1 against approving the variance at its Sept. 22 meeting.

Hamilton County Planning Director C.J. Taylor said the main reason for denying the variance was because Stevens could not prove that Happy Goat Lucky Yoga was going through an unnecessary hardship that was not self-imposed.

“The BZA has to meet five criteria in order to approve a variance, and one of those criteria that was the hurdle for this one was that the zoning ordinance constituted an unnecessary hardship that was not self-imposed,” Taylor said. “The state statute says that the unnecessary hardship cannot be self-imposed and can’t only be for financial gain and, unfortunately, that’s where four of our five members landed. The petitioner did not prove that there was a hardship that was not self-imposed.”
Taylor said Happy Goat Lucky Yoga’s hardship was self-imposed because it chose to move to a residential property not properly zoned for business use.

“I hope they do find a place that’s suitable,” Taylor said.

Stevens said her neighbors’ reaction to the business was more hurtful than the BZA vote. She said the business received equal amounts of support and opposition during the meeting, but one public comment submitted by her neighbor, Lesley Cox, stuck out. Cox wrote a letter to the Hamilton County Plan Commission Board arguing that Happy Goat Lucky Yoga didn’t fit into the area’s comprehensive plan. Cox’s letter said the business would lead to a decrease in property values, and that goat yoga should not be considered agricultural.

“It is a business, pure and simple, and has no agricultural purpose, use, or benefit,” the letter stated.

Current Publishing requested further comment from Cox, but Cox did not respond.

Although disappointed, Stevens said the larger problem she and her family face is not their neighbors disagreeing with their business, but neighbors monitoring them to make sure they aren’t still operating as a business.

“This past month has been horrible,” Stevens said. “We’ve been stalked and harassed. People would stop on the side of the road and see our foster son out there, and they thought he was visiting the goats, and they recorded him. A drone flies over our house every night.”

Stevens said the family hasn’t filed a police report because she feels like there’s not much olice can do without evidence. She said if she sees someone recording her foster son again, she will report it to the police. The family did install cameras on the property.

Stevens said she is most worried about neighbors doing something harmful to her 26 goats. She said sometimes neighbors drive by and rev their engines to scare the goats. Stevens’ house is zoned to allow for the goats.

Happy Goat Lucky Yoga will finish its season with classes at the Tipton Fairgrounds, but Stevens isn’t sure what’s next for the company after this fall. For more, visit happygoatluckyyoga.com. 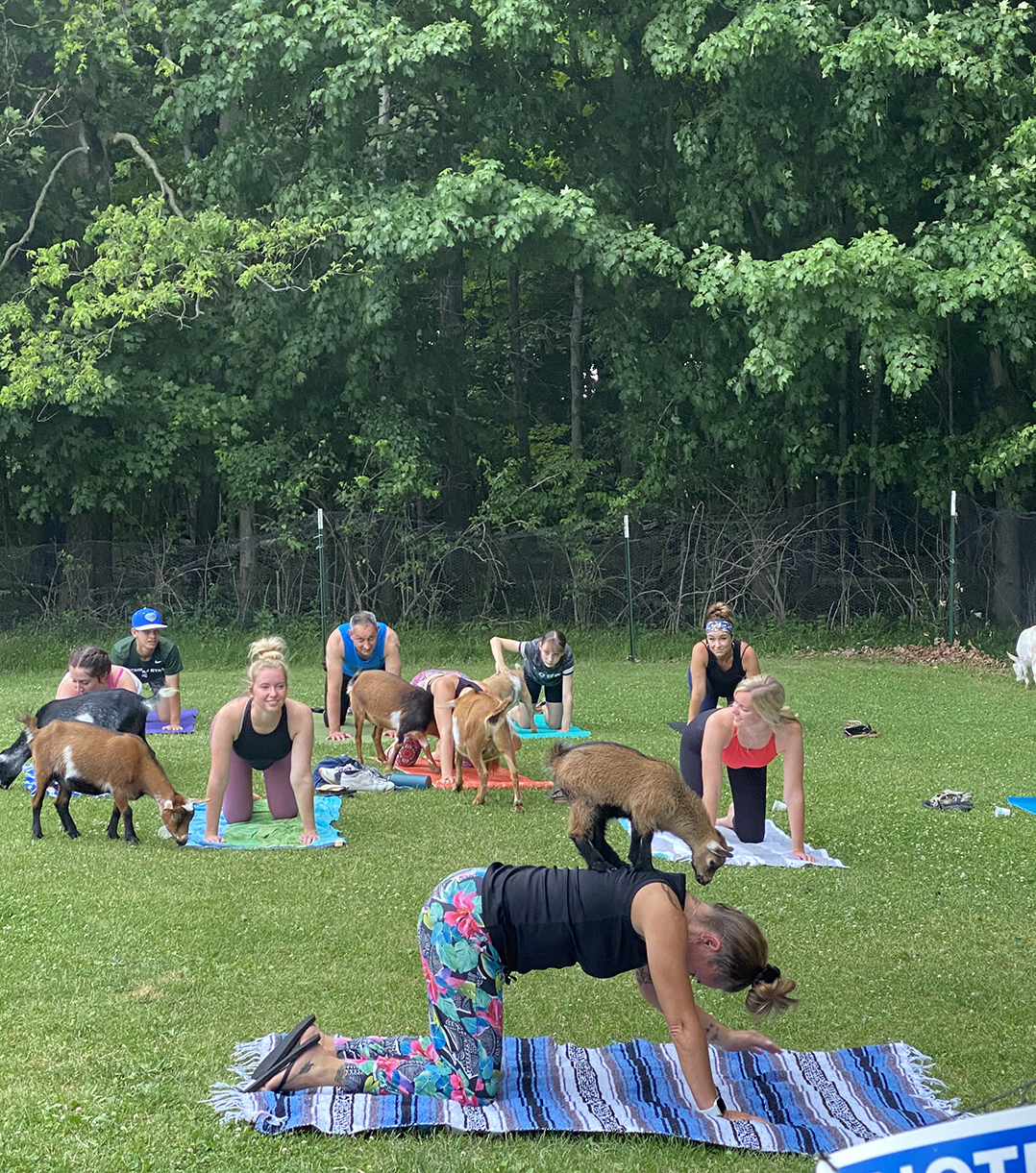 People participate in one of Happy Goat Lucky Yoga’s classes. It is not uncommon for the goats to climb on participants while they are in yoga poses. (Photo courtesy of Jordan Stevens)

The property where Jordan Stevens resides has been in her family for almost 200 years. Her mom lives down the road, and her grandmother has a home on adjacent property. However, despite the history, Stevens said the opposition from her neighbors about her business, Happy Goat Lucky Yoga, is driving the family to look elsewhere to live.

“We just want to find somewhere else to live in a different county,” Stevens said.

Stevens said the family is looking at purchasing property in Boone County, where the zoning ordinance permits riding stables.

“That would be awesome, because we always wanted horses, anyway,” Stevens said. “We are hoping this opens the doorway to something bigger where we can do more things and get more of the farm animals we would like to have.”

Stevens said she’s contacted the planning director in Boone County to ensure the family would be able to operate their business if they move.

“I think we decided we just don’t want to be here anymore, especially when we are surrounded by neighbors who were awful,” Stevens said.