You are at:Home»Current in Carmel»Carmel Community»Athlete of the Week: Ella Bostic sets example for Carmel volleyball teammates

“From a young age I was definitely drawn to the leadership role of setters and their ability to change the game,” Bostic said. “I’ve had great players older than me in club and high school to observe. My height allows me to be an effective setter from both the front and back row and also be an offensive option by tipping or hitting the ball.” 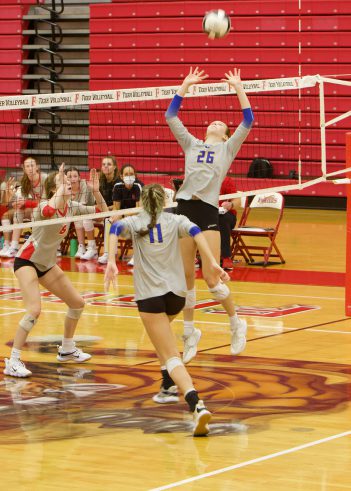 The 6-foot-1 Bostic is in her third season as a varsity setter for the Greyhounds.

“We have a really good rapport on how we like to run the offense,” said Carmel coach Kristine Wheeler Deem, whose nickname is ‘Wheels.’ “She’s been a great asset to the program and is a fantastic leader among her peers. She is always willing to give everything she has got. She is a big-time leader by example.”

Deem said Bostic is having more of a vocal presence this year.

“She is doing everything she can to keep her teammates motivated,” Deem said.

“Our team has a lot of potential to make a run in the state tournament,” Bostic said. “We have an experienced team with seven seniors and a great group of underclassmen. Coach Wheels and her staff have worked hard to create a supportive culture and I think we are starting to see dividends of their hard work.”

Bostic said the goal is a Class 4A state title.

“Personally, my goal this year is to be the best teammate I can be by setting, passing, serving and blocking well and being a good leader,” she said. “As a setter, I want my hitters and teammates to look good, so that is always a goal.”

She would like to surpass 2,000 career assists, but added she is “more concerned about wins than my stats.”

Bostic has played for Munciana Volleyball Club in Yorktown since age 12.

“It is a one-hour drive, one way, from home, but worth every minute,” said Bostic, who has committed to play for the University of North Carolina next season. “The training, coaching and competition is exceptional. My teammates are all great players with bright futures in NCAA volleyball. In June, my team won the 18 Open AAU National Championship in Orlando, which was super exciting.”

Besides volleyball, Bostic participated in dance, gymnastics, soccer, basketball, tennis and lacrosse while growing up.

“I have an older sister who started playing volleyball at a young age,” she said. “Watching her definitely inspired me to start training and play Carmel Dads’ Club. When I was 11, I started playing open-level club volleyball and it has remained my only competitive sport.”

Her sister, Bonnie Bostic, is a sophomore volleyball player at Yale University.