You are at:Home»Current in Fishers»Fishers Community»Kelly remembered for competitiveness, poise

“Her updates about her struggles were moving,” said Guenin, her former coach. “I imagine it would have been easy for Brittany to be angry and wonder, ‘Why me?’ But she didn’t. Her persistence and her unwavering faith were admirable.” 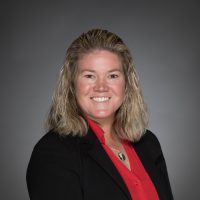 Kelly, a Fishers resident and assistant PGA pro at Woodland Country Club in Carmel, died Aug. 31 at age 32 after a battle with ovarian cancer. Since being diagnosed in December 2019, Kelly tried to raise awareness about the signs of ovarian cancer.

“She was the consummate professional,” Woodland head pro Patrick White said. “Anytime she was able to work, she was here working. There would be days when she’d get her treatments, come in and work the rest of the day knowing (in) two or three days she might not feel as well as she’d like. She was a fighter from Day 1. She always had a smile on her face. You never knew what she was going through.

“She was an inspiring individual. There is a hole in all of our hearts at Woodland Country Club.”

“‘Fierce competitor’ has come up in nearly every conversation I’ve had about Brittany recently,” Guenin said. “She absolutely was fiercely competitive. She had high expectations for herself and her teammates. She pushed herself to become the best golfer she could be and pushed others to become their best. I certainly remember her strong performances on the golf course, but I also remember how much my children loved having her babysit and her sweet interactions with others.”

Guenin said she kept in touch with Kelly periodically after she graduated from HSE.

“She attended our golf matches and coached some of our players,” Guenin said. “She will definitely be missed, but she will always be part of Royal Golf.”

“Her impact on not only our program, but on the game of golf in the state of Indiana is immeasurable,” Ball State coach Katherine Mowat stated. “She was a fierce competitor, who would never back down from a challenge, all the while being one of the gracious teachers and promoters of the game.”