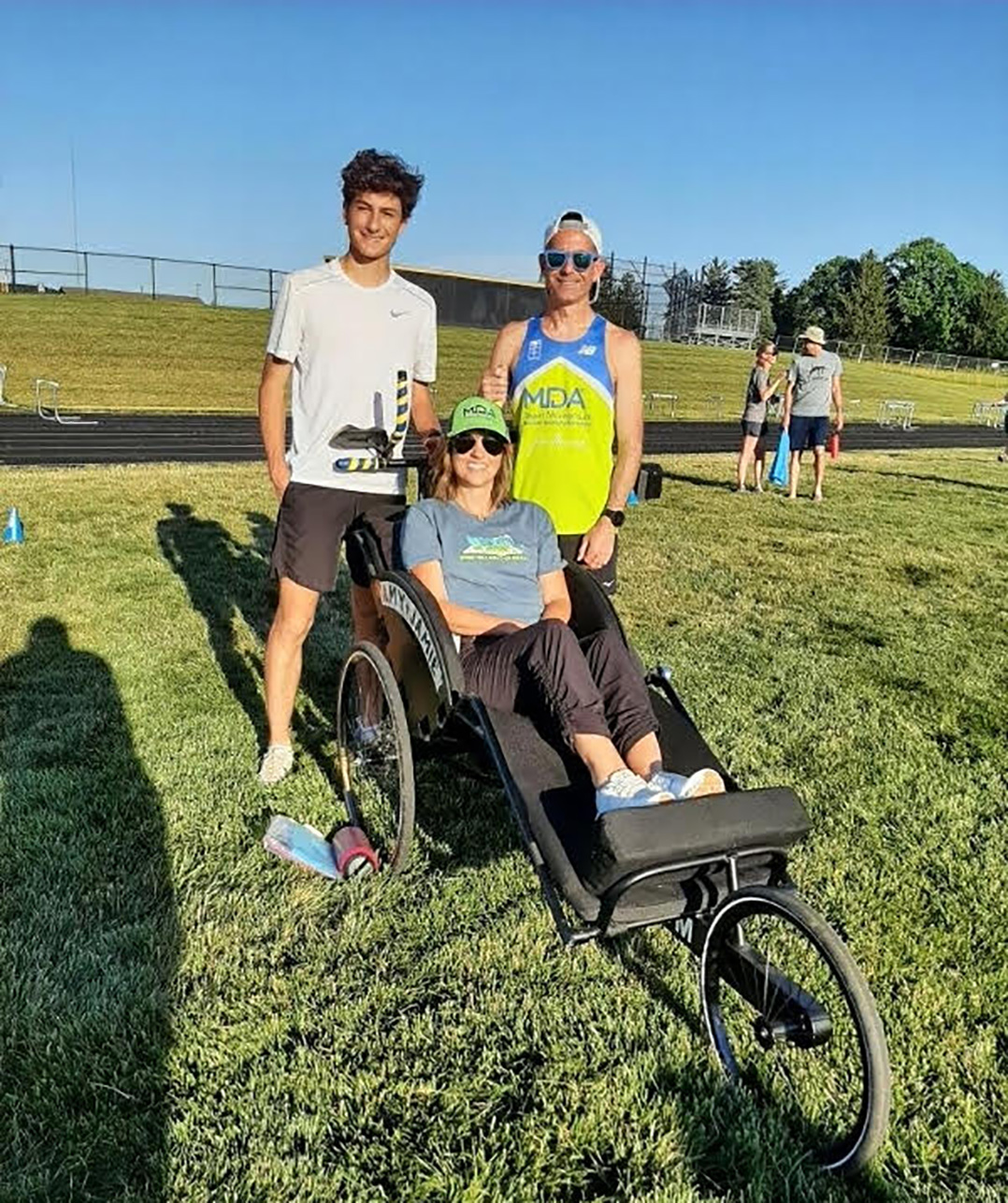 Jamie Shinneman wanted his wife, Amy, to feel what he felt when he was running.

Amy had weak muscles growing up and could never run or jump. It was suspected she had muscular dystrophy, but she wasn’t officially diagnosed until November 2018 when genetic testing showed she had Bethlem myopathy, a form of Ullrich congenital muscular dystrophy that causes muscle weakness in the limbs.

The Noblesville couple used a duo bicycle to train and compete in the Chicago Marathon in October 2019. Now they have set their sights on the New York City Marathon Nov. 7.

“I am very much looking forward to running the 50th anniversary of the NYC Marathon with my family,” Jamie said. “To have our oldest son, Luke, running with us is a dream come true and we hope our youngest (Jack) will be able to join us when he is old enough, too.”

Luke, 18, is a Noblesville High School senior and on the cross country and track and field teams. Jack, 14, also is competing as a freshman on the NHS cross country team. Jamie and Amy are both NHS graduates.

Jamie has already run Boston Marathon twice. When he competes the NYC Marathon, he will have completed half of the six Abbott World Marathon Majors since Chicago and Boston are part of it, too.

“Amy and I hope to do Boston together as well as the others overseas (London, Berlin, Tokyo) someday,” Jamie said.

“Amy and I only do the long run together on Sundays and I run solo the rest of the week,” Jamie said. “Over the 16 weeks of training, our long runs will build from eight miles at the beginning to 20 miles at our peak. There’s nothing quite like being able to run with someone who is exactly the same pace as you to help keep you company during an endurance event like this. She encourages me, prays for me, keeps me up to date on the people following our story, films our journeys and makes me laugh especially when she acts like she’s pulling us up a giant hill with a rope or fishing pole. I don’t think either one of us ever dreamed that we’d be able to do sport like this together, but ever since we’ve found it, there’s been no looking back. It’s one challenge after the next. Together we fight.”

Amy said the numbers of New York City Marathon runners will be less because of the COVID-19 pandemic.

“We got into a lottery for the duo bikes and we were chosen as one of the duo bike teams this year so that was great,” Amy said. “We really excited about it, just fingers crossed that is still happens with all that goes on right now (with COVID-19 numbers on rise). If it doesn’t, we’ll try to get in whenever it does happen.”

The couple completed a virtual Chicago Half-Marathon in the spring.

“But it’s not the same as doing it in person,” Amy said.

Like they previously did for the Chicago Marathon, the couple is raising money for Muscular Dystrophy Association for Team Momentum, the customized endurance training program.

The couple’s personal team is called Humbly Courageous, which is the name of their blog.

“This will be the first time Luke has run with us with the duo bike,” Amy said. “He’s not actually going to be pushing me but he is part of our team.

Amy, who was state MDA ambassador in 2020, has been featured on billboards with Indianapolis Colts running back Nyheim Hines, a 2021 MDA national spokesperson who has family members afflicted with muscular dystrophy