You are at:Home»Current in Zionsville»Zionsville Community»Zionsville diversity and inclusion artwork defaced 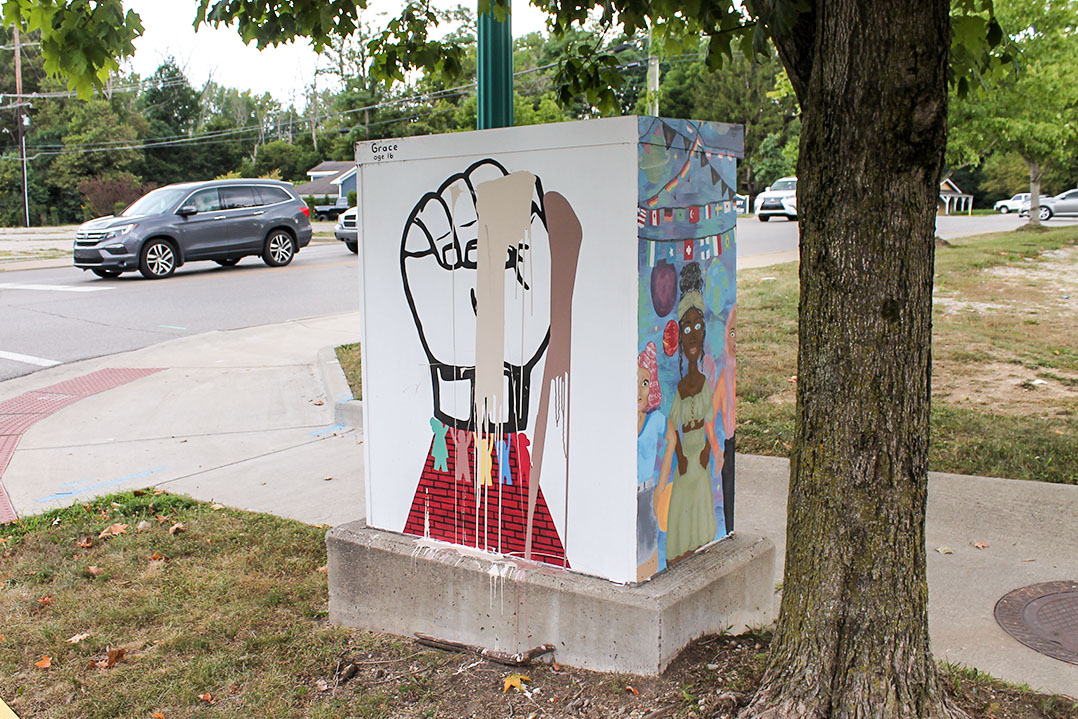 Someone defaced artwork on the traffic control box at the corner of Main and Sycamore streets. (Photo by Jarred Meeks)

A Zionsville traffic control box that was painted by Zionsville Community School Students in 2020 and depicted art promoting equality and inclusion, according to its artists, was defaced Aug. 16. Town officials condemned the vandalism.

In October 2020, four ZCS students painted the traffic control box at the corner of Main and Sycamore streets with social justice themes as part of a project spearheaded by Phoebe Sidebottom, who was an eighth-grade Zionsville Middle School student at the time. The piece was called “All in This Together for Social Justice.”

Sidebottom worked in collaboration with the Zionsville Cultural District, the mayor’s administration, Palette Art Studio and Robert Goodman Jewelers to organize the project, which included choosing three additional students to design one of the four sides of the traffic control box. The Town of Zionsville was not involved in judging the individual artworks, according to the town’s public information officer, Amanda Vela.

On one side of the box, one of the three student artists, Grace Lizama, painted a clenched fist held by figures painted in different colors. The side of the box she was assigned is the most prominent facing motorists. Some Zionsville residents have voiced disapproval of the artwork, questioning why the town allowed students to paint what they deem to be political messages, while others have supported Lizama’s artwork and intended message.

“It was disappointing to see that an individual decided to implement their own ‘cancel culture’ on this artwork done by a Zionsville student,” the Zionsville Town Council stated in a press release. “While you may not agree with the artwork, or the message, this is both immature and selfish of whoever did this on public property. It is no different than vandalizing Town Hall or a police car.”

“We share the sentiments of Zionsville Town Council and the statement issued on their Facebook page,” the mayor’s administration stated in a release. “It’s a shame that an individual vandalized public property and the artwork of a young student. This defacement does not reflect the hearts and minds of our broader community. This is a project initiated by the Zionsville Cultural District in coordination with the mayor’s office and we support any next steps the Zionsville Cultural District proposes. We remain committed to the values these young artists shared through their artwork – social justice and unity.”

As of Aug. 17, the artwork was still defaced.