As a young boy, Weston LeCrone saw a production of Disney’s “Beauty and the Beast” at Beef & Boards Dinner Theatre. The experience didn’t go as planned, and it changed his life forever.

“The power went out in the middle of the show, so we had to come back and see it another day,” LeCrone said. “Despite the mishap, it was one of my first and most memorable theater experiences and sparked my love for theater.” 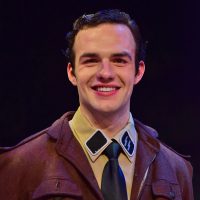 The Zionsville native’s first role took place shortly after, as Linus in “You’re A Good Man, Charlie Brown” at Christian Youth Theater, when he was in fourth grade. He continued performing throughout his school years, participating in his middle school drama club, Summer Stock Stage, and Zionsville Community High School’s drama department before graduating in 2018.

And 16 years after that fateful performance of “Beauty and the Beast,” LeCrone is making his debut on the same stage as Rolf in “The Sound of Music” at Beef & Boards.

“It feels surreal to be working at the very establishment where I fell in love with live theater at such a young age,” he said. “It’s also cool to work with some of the adults that formed some of my earliest theater memories, like Doug King, who choreographed and directed at CYT, and Ron Morgan, who I met through Civic Theatre auditions. Lots of full-circle moments.”

His career has already included multiple productions that deal with the time period of “The Sound of Music,” including “Bent” by Martin Sherman.

“(It) centers around the persecution of gay men in Nazi Germany,” LeCrone said. “(It’s) super meaningful to me and deals with similar themes from ‘The Sound of Music’ in a different light.”

His first professional production was “And Then They Came for Me” at Indiana Repertory Theatre, in which he played a member of the Hitler Youth.

LeCrone is working toward a Bachelor of Fine Arts degree in musical theater with a minor in communications from Elon (N.C.) University. Like most students during the COVID-19 pandemic, he has found flexibility to be crucial.

“I have learned how to adapt quickly and accept new challenges, all while balancing theater opportunities, academic work, a social life, family relationships and so forth,” he said. “One of the accomplishments I am most proud of was directing Elon’s Junior Music Theatre Cabaret this past semester in the midst of the pandemic. My entire class and I put together an hour-long, entirely virtual cabaret consisting of songs, scenes and choreography. Everything was completely student-produced, directed, filmed and edited.”

When he is not on stage, LeCrone is a part-time interpreter at the Indianapolis Zoo.

“I have the opportunity to connect guests with wildlife through storytelling and multi-sensory experiences,” said LeCrone, who also has his own photography business.

“The Sound of Music” is the featured family show for Beef & Boards’ 2021 Season, with $10 discounts off tickets for children ages 3-15. The show concludes Aug. 15. For more, visit beefandboards.com.