One of the reasons Avory Freund fell in love with her husband, Eric, was his sense of adventure and work ethic. Those qualities have led the couple to owning a pig farm in Kansas while living in Westfield.

Eric Freund grew up on a farm in eastern Kansas and began traveling overseas for work, but he returned to the U.S. in 2013 and had the opportunity to purchase the family farm.

“I bought the farm in Kansas and then around the same time met my wife and got married,” Eric Freund said.

“We had some property down there, and we were trying to figure out if we wanted some livestock,” Eric said. “We have always been interested in the farming side of things and agriculture. We started researching livestock breeds and came across this Idaho pasture pig bred specifically to be raised on pasture.”

The Idaho pasture pig is more docile than other pigs and easier to raise.

“So, we bought a few and started experimenting and ultimately developed a herd of these Idaho pasture pigs,” Eric said.

The Freunds began to build up the family farm in Kansas to hold the pigs, but in 2019, the family relocated to Westfield for Freund’s job. However, after lots of searching, the couple couldn’t find a property in Westfield for the family and the herd of pigs.

“So, we moved everything to Kansas and still operate the farm there with that herd of pigs,” said Eric, who travels to Kansas quarterly to ensure operations are running smoothly. “We still bring the pigs from Kansas to Indiana and have them butchered in Indiana and sell the meat here locally, so that’s been our farm operation.”

Eric’s father lives on the farm and runs daily operations.

“I have a big family there in Kansas, so most of the family chips in at some point or another,” Eric said. “It becomes a family affair whenever I go home to work on the farm or do a project or build a new pen. They all come out and we make a family gathering out of it.”

Avory said the couple’s sons, Corbin and Gavin, also help with the pigs. Corbin is almost 4 and Gavin is 2.

“The boys love getting to help with the pigs,” said Avory, who is a school counselor with Zionsville Community Schools. “Corbin likes to hand-pick grass and feed it to the pigs. Even though they’re on pasture, he likes to help feed them.”

Avory said Gavin likes to help tinker with Eric when Eric is building or manufacturing on the farm.

“I love that our boys have exposure to the farm and work ethic and that they will grow up understanding the whole livestock circle of life and how much work goes into it,” Avory said. “One of my favorite things about Eric is he’s not one to sit down and play video games or he’s not big into sports, but he’s out tinkering, he’s out building, he’s out learning and exploring, and that’s something we really want our kids to grow up to also model that. They’re out living an adventure and not necessarily in front of a screen and just learning those life skills.”

The Freunds’ breeding stock consists of seven sows and two boars. The nine pigs are maintained year after year, and their offspring are processed for meat. The Freunds have anywhere from 40 to 50 pigs on the farm at one time. Although most of the pigs go to processing, Freund said the breeding stock has become more like pets. As most pets enjoy treats, the Freunds occasionally provide the breeding stock with marshmallows.

“They just want to come up and have their ears scratched, and they’ll lay down and want a belly rub,” Eric said. “I really don’t know how we started the marshmallow thing, but with livestock and pets, you use treats a lot. It might’ve been my dad who started it and had a bag of marshmallows and found out they really liked those. That’s what we use now mostly for treats.”

For more, visit A&E Farms on Facebook or aefarms.com. 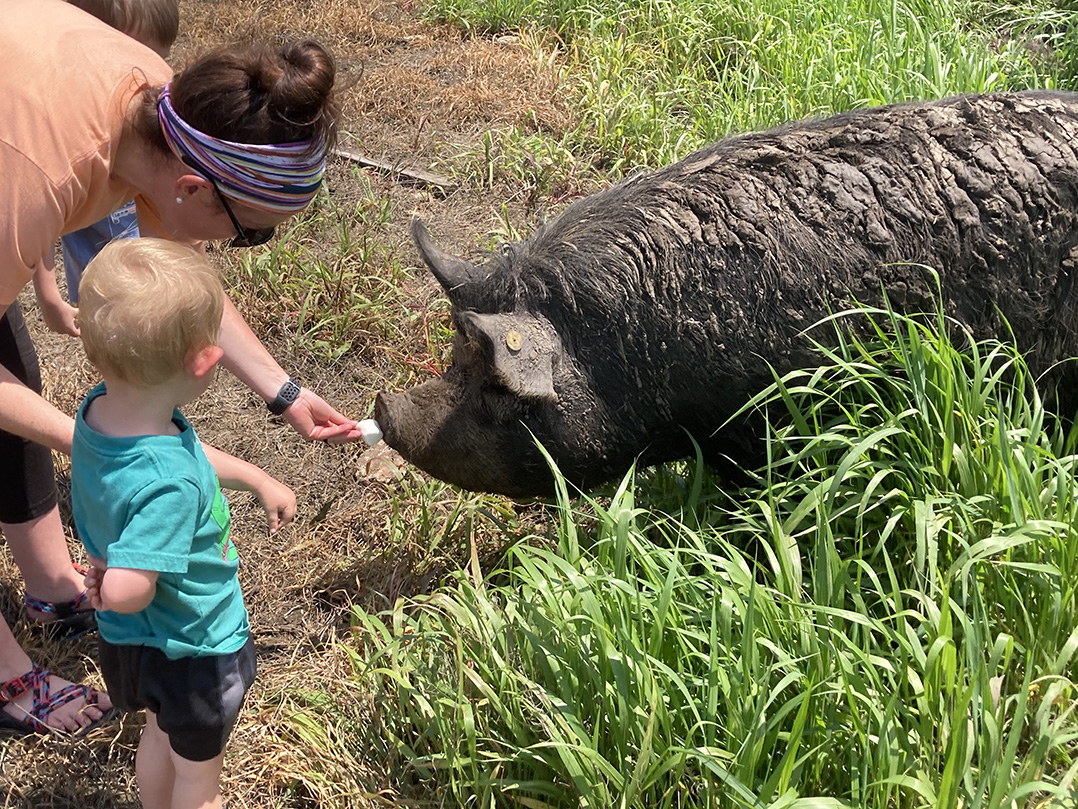 Avory Freund feeds a pig with her son, Gavin.

Idaho pasture pigs differ from other pig breeds in their temperament and personality, and their meat differs, too. Freund said the pork is redder and has a different flavor profile than most other pork. The Freunds sell the meat either through online farmers markets like Market Wagon or directly to the customer through an online store. All the meat is processed in Indiana and then stored in a freezer building next to the Freund’s 3-acre property in Westfield.

The Freunds are creating a more established space at the Westfield property with the goal of allowing customers to personally select their cuts of meat. Avory said the couple is finalizing the space and it should be ready within a month.