Mark William puts his own spins on being a classic crooner.

“I love Great American Songbook material and classic Broadway stuff,” William said. “But I try to stay up to date as well, so I like to bring material from all different genres and eras and interpret through the lens of a young crooner.” 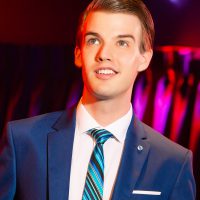 William will perform at 7:30 p.m. Aug. 13-14 at Feinstein’s cabaret in the Hotel Carmichael in Carmel. The title of his show is “Come Croon with Me,” which also is the name of his album, which came out in the fall of 2019.

William, 25, will perform songs from that album and a couple bonus songs.

Some of the songs that are part the album are “Come Fly With Me,” “Moon River” and “On The Street Where You Live.”

“I do stuff by Peter Allen and stuff from some of the classic movies that my nieces and nephews watch, like ‘Wizard of Oz’ and ‘Willie Wonka,’” said William, who is based in New York. “I even do a song from the TV show ‘Smash,’ so it’s a range of different material. Whatever age comes in, they are going to have a good time.”

William, a native of Toledo, Ohio, said this is first chance to take his tour out of New York. He previously has performed shows in Maine.

“It’s an exciting time and I’m glad to have Feinstein’s be a part of that,” he said. “My manager and I are spearheading a musical that is for me, which hopefully will be happening next year. I also recorded a pilot for a new television show as the lead of a young priest who is struggling with his faith and personal life. I started in musical theater, but I’ve done the work and developed my skills to go and do anything.”

William developed his love of music from his mother, Teresa Blowers, a pianist and music teacher. His mother is bringing a large group or friends to the Carmel shows.

“I’m sure it will be wonderful to see so many people I haven’t been able to perform since I left home,” William said.

Following his Feinstein’s shows, William will return to his home club, The Green Room 42, to play in September.