You are at:Home»Current in Fishers»Fishers Cover Stories»Living the dream: Fishers’ Tyler Downs ready to dive for gold in Tokyo Olympics

(Editor’s note: Tyler Downs is in Tokyo and declining media requests during the Olympics to focus on training. Quotes in this story were compiled by USA Diving and are published with permission from USA Diving)

The sun was setting at Conner Prairie on the Fourth of July when the evening’s host began the proceedings by recognizing a teenager in the crowd: Tyler Downs, who had recently made the USA Olympic team in the men’s 3-meter springboard.

Downs, then 17, made quick work of accomplishing a lifelong dream of competing in the Olympics. But it took more than a decade of hard work to get there.

“It feels like I’ve been diving forever. It’s been 12 years,” said Downs, a Fishers resident who turned 18 this month. “Looking back at all the hard work to get here it makes it all the more special.” 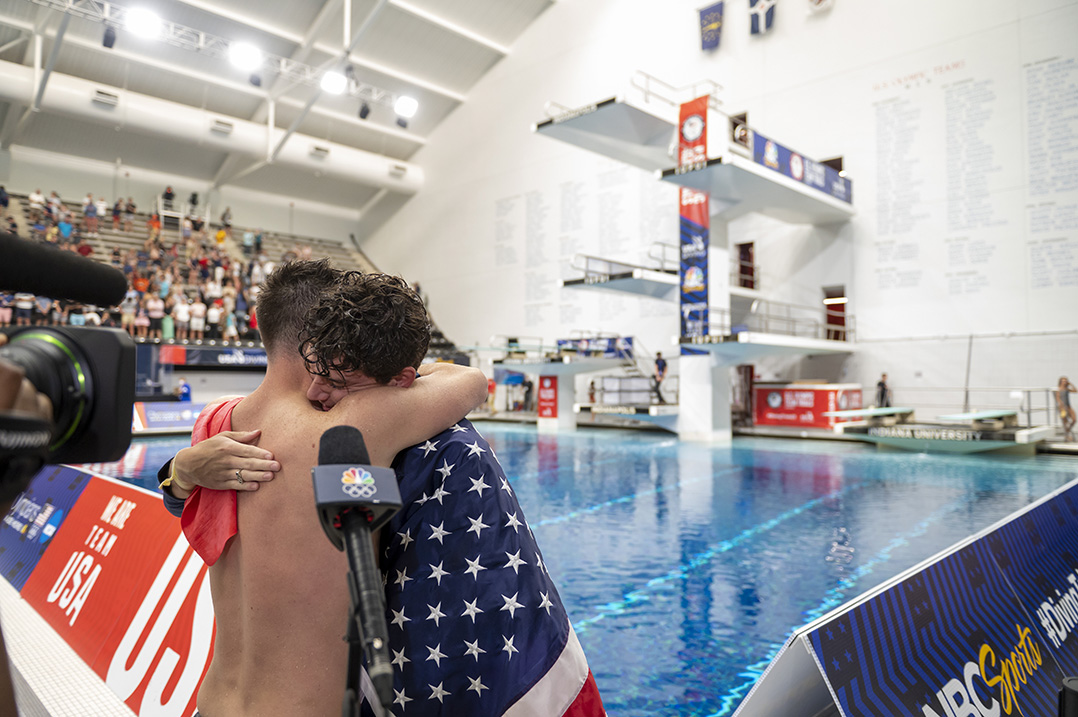 Tyler Downs embraces David Boudia after the June 14 Olympic Trials in Indianapolis. Besides being a four-time Olympic medalist, Boudia also was one of Down’s diving heroes and will be his coach at Purdue University in the fall.

Bonding with an idol

Boudia is one of Downs’ diving heroes.

“It felt like it wasn’t real,” Downs said. “(After the competition) he gave me a hug, and I just started crying, I couldn’t hold it in. And I heard him start crying. He was like, ‘Congrats, you did it.’ It was an insane moment.”

Boudia will soon be Downs’ coach at Purdue University, where Downs is heading in the fall as a pre-chiropractic major. Boudia was hired as a full-time assistant coach for the Boilermakers on July 21 after serving as a volunteer coach for the last several years while he trained at his alma mater.

“I’m going to have him as a mentor,” Downs said. “It’s going to be an amazing opportunity, and I’m going to learn a lot from David.”

Boudia also was impressed with the teenaged Downs.

“Tyler performed brilliantly through a high-pressured event, the Olympic Trials, to earn his first bid to the Olympic Games. He showed mental toughness and grit,” Boudia said. “This is just the start for him if he is able to stay grounded and humble with such high success at such a young age.”

Downs is now in Tokyo waiting for his competition, set for Aug. 2 and 3 – the reward for a lifetime’s worth of training, distilled into a handful of dives in less than 48 hours. But Downs is not frazzled. Elite divers spend many hours on mental training in addition to physical training.

Downs takes the same calm approach to every meet, regardless of the stage.

“I’m just taking (the Olympics) as every other meet that I have done, with no expectations,” Downs said. “I’ve made it to the Olympic Games. I’ve done all that work and now I’m just going to enjoy it and do my best.”

Downs applied the same even-keeled approach at the Olympic Trials.

“With all the mental training that I’ve done, to stay self-motivated and have so much composure really helps (my diving). It also helps with my schoolwork for high school,” Downs said.

Downs took on-line classes in Fishers while he trained for diving. He graduated from his on-line curriculum in the spring of 2021.

“It was just me and my laptop and doing all of this homework,” he said.

Downs is done with his homework; now the Olympic competition awaits.

Tyler Downs’ event — the men’s 3-meter springboard — is set for Aug. 2 and 3. The finals will be at 2 a.m. Eastern time Aug. 3 and can be livestreamed at nbcolympics.com/schedule/sport/diving. It will likely be aired during network primetime coverage on those evenings.

The other American competing with Downs in the 3-meter springboard is another diver with Hoosier ties: Andrew Capobianco. The Mineola, N.Y., native is a seven-time All-American at Indiana University, where he completed his redshirt junior season in 2021 as the Big Ten Diver of the Year. Capobianco also will compete with IU alum Michael Hixon in the men’s synchronized springboard final on July 28.

Historically, Team USA has dominated the 3-meter springboard, winning 37 medals in the event’s history (15 gold, 10 silver, 12 bronze), 24 more medals than second-place China. But the Chinese have won five of the last six gold medals, and it has been a quarter century since America’s last medal in the event. Mark Lenzi won bronze in 1996.