You are at:Home»Current in Carmel»Carmel Education»Speakers read sexually explicit content, man arrested after dropping handgun at Carmel school board meeting

Carmel Clay Schools Supt. Michael Beresford said he was shocked and disappointed by sexually graphic information presented by several members of the community during the public comment portion of the July 26 school board meeting, which often grew contentious and included police escorting one attendee out in handcuffs.

CCS officials said a handgun fell out of a man’s pocket during the meeting, leading several Carmel police officers to quickly surround him, place him in handcuffs and remove him from the room. Police identified the man as Robert Lesher, 69 of Carmel, who was arrested and charged with possession of a firearm on school property. Police said they don’t believe Lesher posed a threat to anyone at the meeting or otherwise. 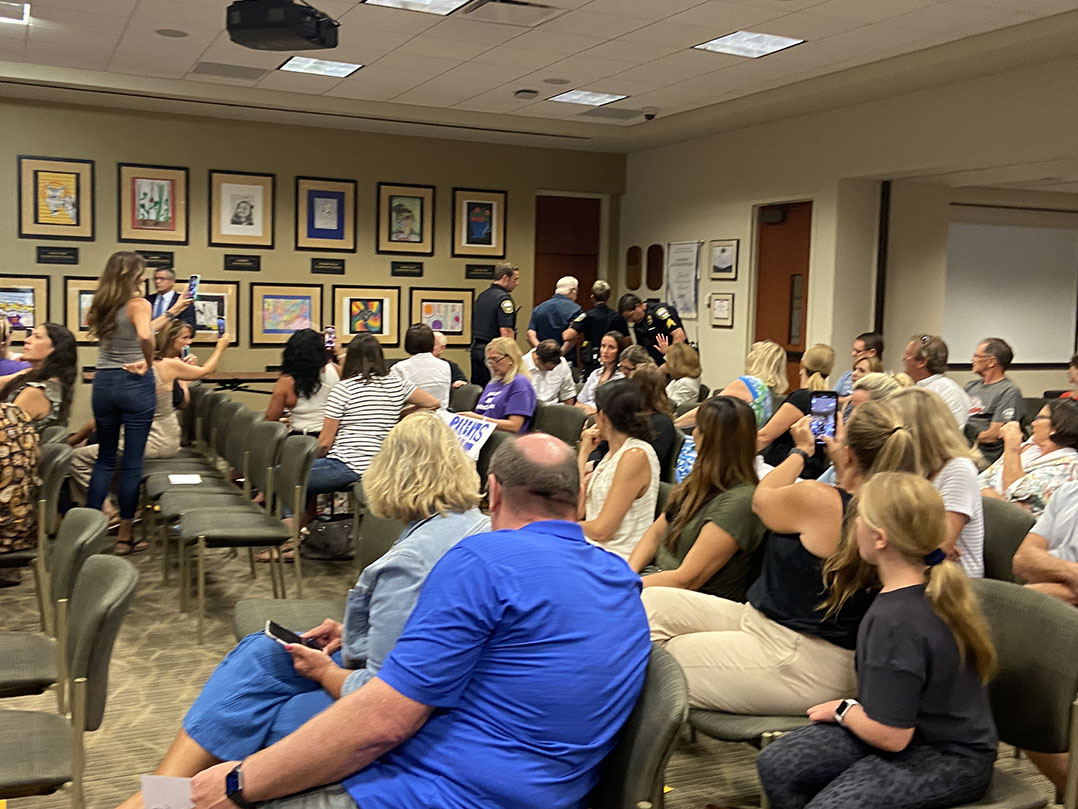 Carmel police handcuff and escort out a man who allegedly dropped a handgun during the July 26 school board meeting. (Photo by Ann Marie Shambaugh)

“It’s shocking. I’m very thankful for the police department. I’m sure they’re investigating the matter and will be bringing out more info as their investigation is complete,” Beresford said. “We’re fortunate it didn’t go off.”

The incident occurred shortly after the public comment portion of the meeting, which included several people reading sexually explicit excerpts from books they said are available to students in Carmel schools. Excerpts also covered gender issues the speakers said are better addressed at home.

Speakers read from books including “Call Me Max,” about a young transgender elementary student, and “l8r, g8r,” a book with detailed information about oral sex. Both books are available to CCS students, the speakers said, the first at an elementary school and the second at Carmel High School.

“Movies require ratings and parental approval (for students) to be in them, but the schools don’t protect our children in the same way,” said Gina Fosso, a mother of five, after reading from the “l8r, g8r” book.

Beresford said he could not confirm if the books are in Carmel schools, but he said material read during the meeting is “completely inappropriate” for students and “not in line with our values here at Carmel Clay Schools.” He said CCS will investigate each claim made during the “disturbing night.”

“It was inappropriate to even listen to that (during public comment),” Beresford said. “We probably need to determine as a school district and as a community, is that what we want to say out loud? I would much rather have that brought to my attention rather than brought up in a public meeting.”

Beresford said CCS has a process for parents to report offensive material in books and that the district has already been investigating some complaints made this year. He said the process for approving books at CCS differs from media centers to classrooms to other places they are found.