The friends graduated from Carmel High School in 1996 and remained close. 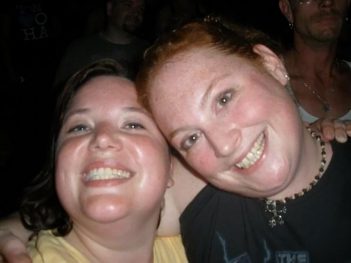 “I’ve been obsessed with podcasts since I found them,” Selznick said. “For years, I was saying we should do a podcast.”

Adams did the research and found it was doable.

“I couldn’t see doing a podcast with anyone else,” Selznick said.

Their podcast, “Trendy Lobotomy,” made its debut March 3 and is released on Wednesdays. They have been recording episodes since December 2020.

“We started with Indiana urban legends because this is what we heard growing up,” said Adams, who lives on the south side of Indianapolis. “We started to get friends from other areas. We asked them to send stories from their area.”

Selznick has been interested in caves, so she covered a story on Mammoth Cave.

“I covered Crown Hill Cemetery in an early episode,” Selznick said. “When I did the story, I had a printout of all the famous people buried in Crown Hill, which Krysti immediately yanked and came up with several stories from that.”

“Indiana is getting a little bit thin because on a lot of the episodes we cover more than one story,” Selznick said. “We went through a bunch of urban legends. But there is so much we can cover that it’s got a life of its own. It’s going to keep on going.”

Selznick is a psychiatric nurse and Adams works in early childhood education. So, they must do their podcasts in their spare time.

“We release some extras on Patreon a couple of times a month,” Selznick said. “People can pledge a certain amount. Our tiers are $3 to $20 and it’s monthly. It’s a little easier than finding ads and we reward our patrons with extra goodies.”

They have 11 patrons now. Selznick said it’s enough to cover their expenses.

The episodes range from a half-hour to an hour.

“Sometimes we go on more tangents than others,” Adams said.

They record in Selznick’s mother’s basement in Carmel, usually on weekends.

Selznick said she is turning an extra bedroom in her Carmel house into the podcast room.

“But it’s been a little slow going, so we’ve continued to trash my mom’s basement,” Selznick said.

Selznick’s son, Chase Krise, serves as the artist and occasionally assists on the podcast. Krise is going to be a Carmel High School sophomore in August.

“Carmel High School did both of us a favor,” Selznick said. “Krysti has performing arts experience, and she was an Ambassador (mixed show choir). Both of us were Marching Greyhounds. I was at WHJE (CHS radio station) way back in the day.”